When Marilyn Monroe Sprained Her Ankle for Israel 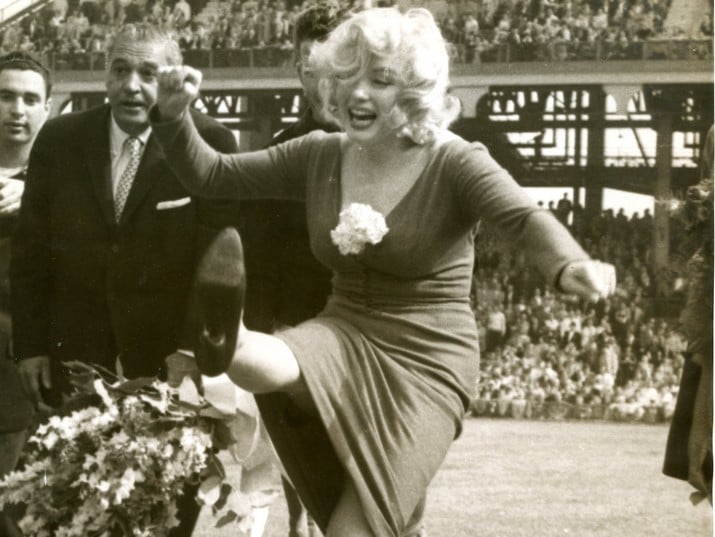 Marilyn Monroe was given the honor of kicking off the game between Hapoel and a team of U.S. All-Stars. Photo: Eliyahu Atar

In 1957, a special telegram was sent to the Hapoel Tel Aviv soccer team. Just before embarking on a celebratory trip to the United States on the occasion of the ninth anniversary of the State of Israel, the players were asked “Which American would you like to meet during your trip?” The players answered without hesitation: “As athletes, we would like to meet with the Brooklyn Dodgers. As men – with Marilyn Monroe.” This required quite a few strings to be pulled and quite a few phone calls to be made, but eventually the players’ wish came true.

The glitzy event featured a friendly soccer match on May 12th, 1957 between Hapoel and a team of American All-Stars, which took place under the slogan “Long Live the State of Israel!” The venue was historic Ebbets Field, home of the Brooklyn Dodgers, who would move out to sunny Los Angeles later that year. In the stands were New York Mayor Robert Wagner, Israeli Ambassador to the United States Abba Eban, senators, cultural figures, representatives of Jewish organizations and many more. To top it all off, none other than Mrs. Marilyn Monroe would have the honor of kicking off the game!

Footage of the Historic Moment:

“Suddenly an open convertible burst into the stadium,” wrote Dan Pachter in the Israeli Davar Daily, “and in the backseat, there she was – the Hapoel mascot – the movie star, Marilyn Monroe!!! Three exclamation points will not suffice to emphasize the enthusiasm of the crowd. Marilyn rose to her feet and waved to every section of the audience – the same fair-haired Marilyn, who so artfully demonstrates her natural mischief. A marching band and a group of cheerleaders strode before her and behind them – the two teams in line.”

But the climax was what happened next: “The blonde movie star appeared on the field in minimal blue attire, featuring cleavage that occasionally tended to delve into dangerous dimensions,” the Herut newspaper reported. “Marilyn had to kick the ball no less than three times – twice for the many photographers who had gathered on the field and once for the soccer players.”

And while we wish the report ended here, this was not the case: “Her second kick scored a direct hit – right in the face of United Press photographer Joel Landau. After the final kick, the actress left the field limping, while leaning on the arm of the happily beaming Judge Samuel Leibowitz, her official chaperone for the game.”

The Hapoel team ended up winning the thrilling match by the score of 6 to 4. Legendary Israeli goalkeeper Ya’akov Khodorov had a few particularly close moments with Monroe – holding her hand, speaking with her and taking pictures with her several times. Unsurprisingly, after the game was over, he was asked if the four goals he conceded were a result of being starstruck by the celebrity actress.

“The papers wrote that I got confused and let in some unnecessary goals because I had been near Marilyn Monroe,” the goalkeeper said after the game. “True, I was a little excited, but who wouldn’t be excited next to her?”