The Brazilian-Israeli Who Was Sent to the Front, Captured, and Returned in a Syrian Uniform

The story of the prisoner of war, Julio Friedman, whose picture was identified by his family as part of the National Library’s 'Naming the Soldiers' project 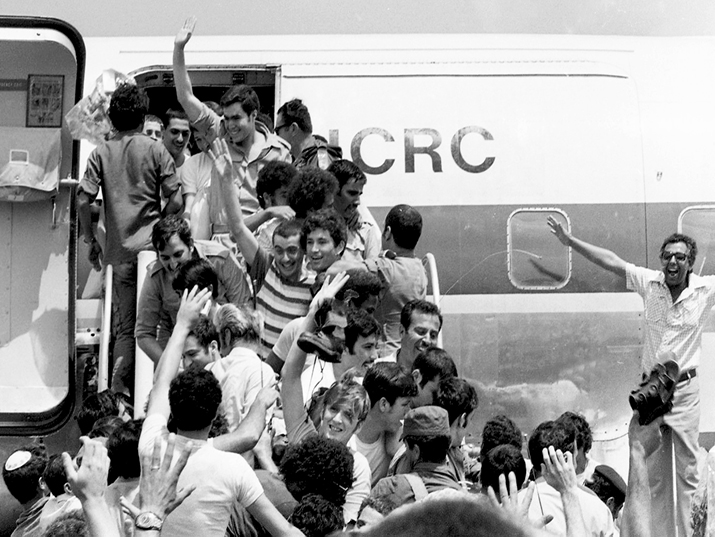 “This is a picture that we, the family, didn’t know about,” says Clarinia, the sister of Julio Friedman, who appears in the center of the picture. When we told her about the National Library’s ‘Naming the Soldiers’ project in honor of Israel’s 71st Independence Day, we could hear the excitement in her voice. Her voice would break more than once throughout the course of our conversation as she relived those distant, unpleasant days.

Clarinia begins the story in 1970. This was the year she (then married with a child and a second on the way) immigrated to Israel with her brother, Julio. Julio first worked picking bananas (“he was a big, strong man”) while he learned Hebrew in an ulpan, a Hebrew-language school for new immigrants (olim). After he was able to save up a bit of money, he bought a Volkswagen van and used it to drive around a troupe of flamenco dancers he had met. He also found work as a technician at Israel Aerospace Industries (IAI).

Julio, Clarinia, and many others who emigrated from Brazil to Israel found it difficult to master the new language of Hebrew. This fact would prove to play a crucial role when Julio joined the IDF.

After two and a half years in Israel, Julio, who was 26 when he immigrated to Israel, was called up to serve a shortened military service that was compulsory for olim – six months of service. He would not, however, even have the opportunity to complete the three-month basic training. Less than two and a half months after his enlistment, the Yom Kippur War broke out. Julio was dispatched to the northern front – the embattled Golan Heights.

On the second day of the war, Clarinia felt something was wrong. The day before, she and her friends were baffled by a siren going off on Yom Kippur and what the illogical sentences crackling out of the radio meant. It was not until Golda Meir herself broadcast a dramatic announcement over the airwaves that the members of the Brazilian immigrant community in Herzliya understood that something serious had occurred. Thanks to a neighbor who decoded the Hebrew message by translating it into her mother tongue, Romanian (“Portuguese and Romanian are both Latin languages, so we managed to understand a little”), the members of the small community of Brazilian-Israelis understood that a war had broken out over the High Holiday.

Only several hours after getting her bad feeling, uniformed soldiers knocked on Clarinia’s door. They explained that since Julio had left basic training a few days prior, they thought it was best to return a package that Clarinia had previously sent to her brother. The soldiers did not know to which base Julio had been dispatched. They had only come to return the package out of courtesy. At that very moment, no one in the IDF knew that Julio had already been captured by Syrian forces, and was apparently being taken by his captors to the Syrian capital. Over the next two weeks, he would undergo a series of interrogations and mistreatment. Afterwards, he and other Israeli prisoners of war would be held in the Al-Mezzeh prison, overlooking Damascus

Through a family friend, Clarinia and her husband discovered that Julio’s most likely last known location – or, more precisely, the location of an Israeli soldier of Brazilian origin – was in a bunker in the north of the country. Their attempt to track down the last person to see Julio alive led them to a soldier who was healing from an ear injury at a base in Acre. This was all the information that Clarinia and her husband had to go on. They did not know the name of the soldier or what he looked like. The couple traveled to the base in search of information and answers.

When they arrived, Clarinia and her husband received confirmation that a soldier who was recovering from an ear injury and had been in a bunker in the north was indeed assigned to the base. But, he had received a weekend pass and had already left the base.  The couple spoke with the base commander, but he did not know the name of the soldier in question. The commander only knew that he was of Indian origin and lived in Lod.

Clarinia and her husband tracked down the soldier at the cinema in Lod, and he was able to confirm that the missing Brazilian soldier who was with him and two other soldiers in the bunker was indeed Julio. He explained that the situation in the bunker had been dire. Except for Julio, all of the soldiers in the bunker had been wounded. Supplies were running dangerously low, so Julio volunteered to venture out of the safety of the bunker in search of water. “We heard words in Arabic and we did not know what happened after that,” the soldier explained to Clarinia and her husband. It was only after his return from captivity that Julio told his sister that he thought that the Syrian soldiers he heard were speaking in Hebrew, which led him to approach them for help.

“We informed Julio’s direct superior of what we had learned. Three or four IDF commanders showed up with maps in their hands, to tell us what they thought had happened.” Then, Clarinia repeated a sentence that is burned painfully in her mind to this day, a sentence uttered by one of the commanders. “Do not think too much about it. In the first few days of a war, you do not take prisoners.”

The war that had broken out on October 6, 1973 was officially ended with a ceasefire on October 24. Although the ceasefire had officially gone into effect, Israelis and Syrians would continue to exchange fire along the border into 1974. It was in February, 1974, that US Secretary of State Henry Kissinger was able to obtain the full list of Israeli prisoners from the Syrian government. On the night the list was released to the public, another military delegation knocked on Clarinia’s door. “This time, it was a sweet young female soldier who informed us that Julio was on the list of prisoners. Until that moment, we still did not know what had happened to him.” It was only then that Clarinia phoned her mother, who had stayed behind in Brazil, to inform her of her brother’s situation. This was the first time that she had told their mother that anything was wrong.

Kissinger’s list paved the way for the Red Cross to become involved in the conflict, and a connection between the prisoners in Syria and their home country was established. “That’s how we saw him for the first time, in a photo sent by the Red Cross. He very thin, but alive.”

The return of the prisoners, which was planned for May, was postponed to June 6, 1974. David Avaky spent the eight months of captivity as Julio’s cellmate. In the conversation we held with David, he told us about the moment the prisoners realized that they were returning to Israel. “We had one jailer who treated us very well…He spoke with us on a human level…One day he came in to visit a wounded soldier and asked him to collect all his personal effects and come with him. We were used to the Syrians taking us away for short periods of time. But, having the soldier take his things with him was something new. Half an hour later, he returned and spoke with us about the history of the region, about Israel and Syria. He told us that all the wounded were being returned to Israel and that he was going on holiday. ‘Inshallah, we will not meet again when I return.’ Indeed, a week later, we returned to Israel. In the days following his visit, we felt the relationship begin to change. But, the biggest change was the day before we were released. They brought us sports clothes and took us out to exercise. Representatives of the Red Cross were there, and they informed any prisoners who were still in the dark about our planned return home. We remained skeptical the entire trip south to the border.”

Clarinia remembered the day that the prisoners returned to Israel. At the welcoming ceremony, the IDF placed the families behind a barrier. In front of the barrier was a platform for Prime Minister Golda Meir and Defense Minister Moshe Dayan, who were supposed to meet the prisoners first. “As soon as the blue plane with the Red Cross touched down on the tarmac, there was no barrier that could hold us back.”

Among the last of the prisoners to disembark the plane was Julio. He could not walk. When Clarinia finally saw Julio’s smiling face, she saw that he was missing his two front teeth. This was the first sign of the horrors that he had endured. “Were you wounded in the leg?” asked his worried sister. Her brother explained that he was not, but that he had been given shoes three sizes too small. And why was he the only soldier dressed in Syrian army uniform? “I did not believe it. I refused to take off my prison uniform until my feet stood on Israeli soil.”

Julio talked with his sister about his captivity for three days and nights. It was during this release of emotions that he revealed to Clarinia the atrocities he had endured in Syria. After the three days, he never spoke of his captivity again. Julio died in 2008 after a long struggle with cancer, a disease that the IDF later recognized as a result of Julio’s coping with his time in captivity. His two children knew almost nothing of this period of his life. It was only at their father’s shiva that Clarinia told them the story that Julio had revealed during the first three days after his return.

At the end of our conversation with Clarinia, we asked about the man he was. Who was the man who had experienced these terrible things at the hands of his captors? Who was the man who had told her everything over three days and never spoke of it again? He later married, adopted two children, and raised a family. Did his captivity change his character? Clarinia says no. Julio was an easy-going character. He allowed troubles to pass by him, all the while remaining stable and unchanging. “That’s the only way he got through it,” she said, adding that there was one thing Julio was not able to overcome, “Only the noise of keys, that was the only noise that bothered him.”

Julio’s wife, Bella Friedman, identified the picture of her husband returning from captivity in a post that we published. The couple, who first met in the Hashomer Hatzair youth movement in Rio de Janeiro, Brazil, met again in Israel in 1974. In February 1975 they married. Bella was also the one who recommended we speak to Clarinia and David Avaki.

We would like to thank Bella, Clarinia, and David for sharing Julio’s story with us, as well as their own memories, and especially for opening their hearts to us.   If you liked this story, try these: Naming the Soldiers: A Special Joint Project by the National Library and Facebook A Life Story in One Picture: The Photographer Who Fell in the War of Independence The Mother Who Stayed Behind to Defend Her Home During Israel’s War of Independence