The Opposition to the First “Jerusalem Reunification Day” 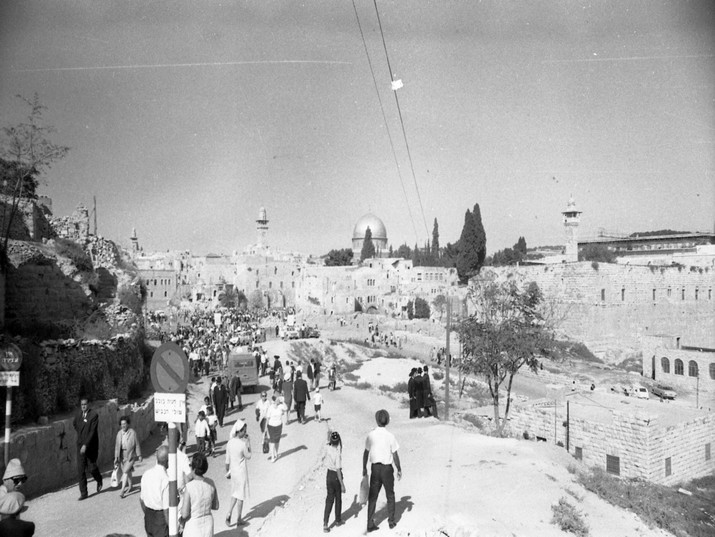 On the way to the Western Wall, 1967, the Bitmuna Collections

“Jerusalem Day,” or “Jerusalem Reunification Day,” is an officially recognized national holiday in Israel which enjoys broad acceptance in the country today. But, it has not always been so. In the year following the reunification of Jerusalem in the Six-Day War, the Prime Minister of Israel and the mayor of Jerusalem openly objected to the creation of the holiday. It was only after the public itself made its opinion clear in favor of a new national holiday that the municipal and governmental institutions followed suit.

Following Israel’s War of Independence in 1948, Jerusalem was a divided city. For 19 years, West Jerusalem belonged to Israel, while East Jerusalem was held by Jordan. It was only in 1967, or more precisely, on the third day of the Six-Day War, that the soldiers of the IDF Paratroopers Brigade, commanded by Col. Motta Gur (a future Chief of Staff), broke through the Jordanian defenses and took the Old City and East Jerusalem. The reunification of Jerusalem was completed with Motta Gur’s now famous declaration “The Temple Mount is in our hands!”

Following the war, a desire emerged to establish a special day dedicated to the unified city of Jerusalem, the capital of the State of Israel. The first initiative came from the Chief Rabbinate on the first anniversary of the city’s reunification. The heads of the Rabbinate sought to establish the 28th day of the Hebrew month of Iyar as a day of thanksgiving for the miracles that resulted in the city’s unification under Israeli control.

The Jerusalem Municipality followed up on the rabbinical initiative, announcing its celebrations to mark the new Jerusalem Day holiday, but the Israeli government immediately attempted to have the decision cancelled, refusing to offer any funding for the ceremonies being planned.

Even the mayor of Jerusalem, Teddy Kollek, requested that his own municipal authorities cancel their plans for fear that the festivities would offend the Arab population of East Jerusalem. Prime Minister Levi Eshkol was also reluctant to hold the ceremony in its intended format. The Office of the Prime Minister released a statement that Eshkol would decline the “honorary citizenship” that the Jerusalem Municipality intended to award him at the ceremony.

Despite the reluctance shown by Levi Eshkol and Teddy Kollek, the municipal authorities decided to move forward with the ceremony.

A great sense of national joy served as the driving force behind the festivities, which were, in the end, held as planned, including the awarding of an honorary citizenship to the Prime Minister. Jerusalem was illuminated and decorated with an exuberance that rivalled that of the famously uninhibited Independence Day celebrations.

However, unlike Independence Day, the first Jerusalem Day celebration took on a more spontaneous character. Aside from the municipality, one of the only official bodies involved in the preparations was the Chief Rabbinate, which organized a mass prayer at the Western Wall.

Various delegations converged on the capital city, including groups of students from Bar-Ilan University and Haifa’s Technion institute, who tried in vain to sweep up the local students of the Hebrew University in their excitement. A wide variety of grassroots events were held throughout the city: marches, public assemblies, school activities, as well as “ordinary” excited crowds who came streaming into the capital. There were also a number of memorial events for fallen soldiers.

It was only a full four months later that the Israeli government finally agreed to declare the 28th of Iyar as “Jerusalem Day”, with the Knesset, the Israeli parliament, adding its approval even later still.

Today, Jerusalem Day is a national holiday. It is marked by celebrations in cities throughout Israel, in schools, in the media, and in Jerusalem itself. Few are aware of the resistance that preceded the first celebration of the holiday, and that its marking should not be taken for granted.