The Heroine Who Rescued Jewish Girls from Lebanon and Syria 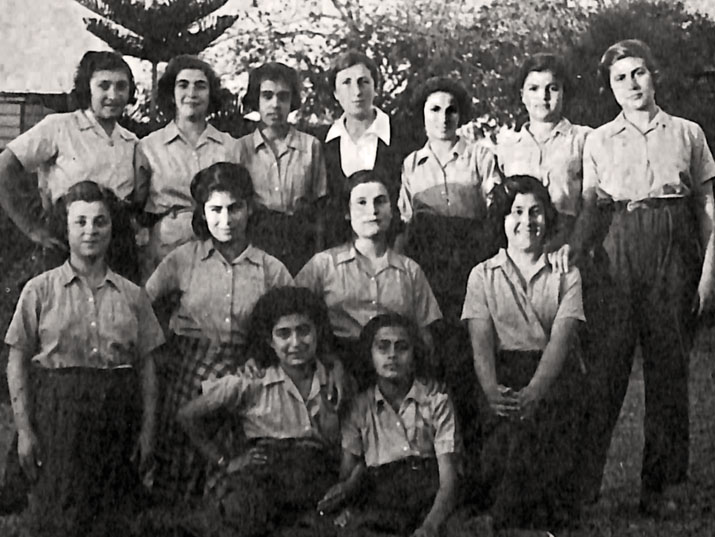 Girls from Damascus on a worker's farm ("Meshek HaPoalot") in the Land of Israel, early 1944, from the book 'On a Mission to Lebanon and Syria' by Rachel Yanait Ben-Zvi (Hebrew)

She was a revolutionary, a passionate Zionist and among the founders of the Jewish defense organization Hashomer. She was also one of only two women in the group. It’s difficult to think of a Zionist humanitarian project in which Rachel Yanait Ben-Zvi wasn’t involved during the establishment of the Jewish and democratic state her generation had always dreamed of.

Of all her various activities, her top priority was immigration to the Land of Israel. Ben-Zvi was especially concerned with the immigration of young women, as well as their training. These young women needed to acquire the skills that would benefit the Zionist project. While most people of her generation perhaps preferred to wait for a later opportunity, or perhaps were not at all concerned with the matter, Ben-Zvi saw great importance in bringing Jews of Arab origin to the ‘state in-the-making’, as soon as possible. When she identified a window of opportunity to realize this great dream, she immediately pursued it.

It was the events of the Farhud – the horrific massacre in Baghdad on June 1st, 1941, in which 179 members of the Jewish community were murdered – that convinced Rachel Yanait Ben-Zvi that time was running out for the Jews of the Arab world. Since access to Baghdad was practically inaccessible, “an idea had come up; to​bring young women from the neighboring Arab countries – Lebanon and Syria.”

Ben-Zvi met with Henrietta Szold, the coordinator of the Youth Aliyah organization, spoke with children who emigrated from Syria on their own and promised to bring as many young women as possible to Mandatory Palestine and train them in agriculture. Szold provided her with fifty immigration certificates (issued by the British) for the mission. There was concern that if she were to gather too many young women, the British would deny them entry into Israel.

From Jerusalem, Ben-Zvi headed out to Beirut. She relied on connections she had formed with Beirut community leaders during their visit to Mandatory Palestine and promptly met with Joseph Farhi. Many were opposed to the journey, arguing that “in Jewish homes in these countries girls are not allowed to leave the house,” and concluded that she would not be able to persuade the families to let the young women leave.

Despite the help she received from activists of HeChalutz, the Zionist underground organization, the task of swaying the families indeed turned out to be quite challenging: In many families, the father had immigrated to Latin America and mothers “looked forward to joining the head of the family overseas with their children, and, for the time being, were apprehensive about separating from the girls selected for Aliyah [Jewish immigration to the Land of Israel].”

“The mothers hear that I am looking for girls ages 13 and 14 and are already concerned about their future because at 16 or 17 years old they marry their daughters off. I reassure them, explaining that the girls will be accepted to the settlement project, where they will not be held back from getting married, raising families and bringing their relatives from Beirut to Israel.”

That was exactly the answer the worried families wanted to hear.

From the moment she arrived in Damascus, Ben-Zvi was struck by the vibrant Zionist activity in the Syrian capital, which easily overshadowed the relatively dormant Beirut underground organization. She was impressed by the Jewish youth’s strong desire to immigrate to Israel, even at the price of bitter arguments with their parents.

The eagerness and urgency expressed by the Youth Aliyah representative alarmed the activists who accompanied her: They demanded that Ben-Zvi refrain from speaking Hebrew even inside the Jewish ghetto. Only at the home of the community leader was she allowed to speak freely. She spoke to the dignitaries in Hebrew and French and was pleased to see that “the idea of ​​bringing students to be trained on educational farms was willingly accepted.” After receiving unanimous approval, she scheduled a meeting for the next day with the high school students.

“On my very first visit we informed the older high school girls of the idea of bringing young women to the Land of Israel for training and study. When the girls were asked if they would like to immigrate, they all raised their hands enthusiastically. In the more advanced grades, most high school students were girls,  while there were few young men. I learned that the boys had to work to support their parents. The few young men in class immediately demanded an explanation: ‘Why? Why could only girls immigrate? What would be the fate of the boys?’ I tried to offer comfort: ‘Their time will come, too.’ During the long recess I felt that the news was spreading from one class to the next. As I walked through the yard, I was stared at, hundreds and hundreds of children were drawn to me, calling out, ‘Palestine, Palestine, Eretz Yisrael!'”

After sorting out the immigration process in Damascus, Ben-Zvi moved on to Aleppo, arriving in November, 1943. She was shocked to see the location of the girls’ school – it was adjacent to a Syrian brothel frequented by soldiers around the clock. She heatedly told the school principal, “the whole neighborhood is a symbol of diasporic dispossession.”

“On Friday morning, a sense of bustling preparation for Shabbat was in the Aleppo air. The Jews in the streets drew my attention with the words: ‘Erev Shabbat! ‘Erev Shabbat‘[the eve of the Jewish Sabbath]! And in the school classrooms, in every grade, it was heard everywhere – ‘Erev Shabbat!’ Those who mumbled in French, those who spoke Arabic, they all called out, everywhere – ‘Erev Shabbat!’ My heart, too, was filled with the spirit of Shabbat. And isn’t Shabbat as virtuous as the Torah itself? Is it not Shabbat that has kept the flame burning from ages past to this day? It is the eve of Shabbat even now, yet my time is so short! I must gather the candidates who registered at the Alliance, Jamiliya, and Bahsita schools today, on the eve of Shabbat. And I have already scheduled a parents’ meeting after the Shabbat meal.”

Ben-Zvi described the great pressure she was under to accept as many girls as possible: “And the list keeps getting longer; the girls are crying and their mothers are crying, and just like that – they have all turned 14 years old; including one who is almost 18 years old and another who is not even 12 years old.”

In despair, Ben-Zvi decided that “the age will be determined solely according to birth certificates” and girls of the appropriate age were chosen according to a clear criterion: “If they are fit for agricultural training and theoretical studies.” In order to not leave out any suitable candidates, Ben-Zvi herself conducted interviews with each potential candidate.

Ben-Zvi encouraged the boys and adults she met in Aleppo to immigrate to Israel illegally, as she only had enough permits for fifty girls. It was the same message she delivered in Beirut and Damascus. From Aleppo, Ben-Zvi returned to Beirut, where, with Farhi’s support, she gathered the girls from all three cities. Some of the young women were accompanied by Ben-Zvi herself and some by other activists. They were received in Mandatory Palestine at Ayanot, Petach Tikva and Nahalat Yehuda. It wouldn’t be long before many of the young women would become Hebrew teachers and immigration activists themselves. They made the journey back to their communities and helped their families immigrate to Israel.

For the rest of her life, Rachel Yanait Ben-Zvi would take pride in her projects, especially in the achievements of the young immigrants whom she helped reach the Land of Israel. However, one question remained in her mind: “To me, it does not make sense; how could we have neglected these Jewish communities that are so close to us, until now? Damascus, located just an hour from the Israeli border and Beirut, which is just three hours from Haifa!”