The Nazis Failed to Destroy the Artist David Friedmann 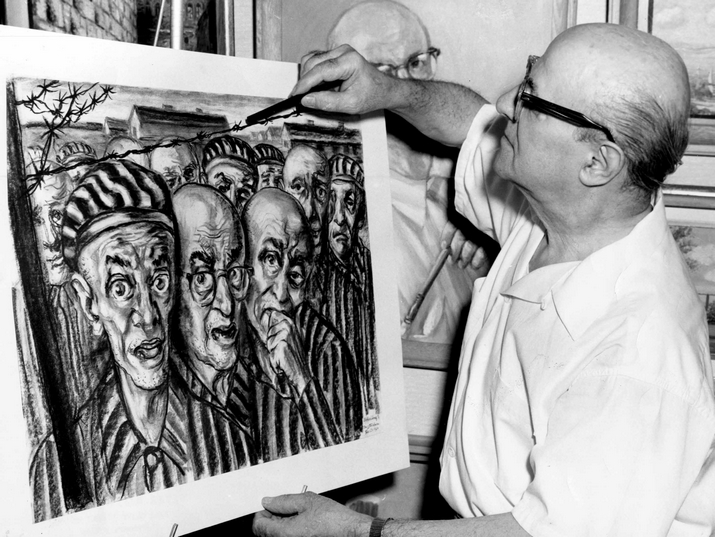 Since childhood I watched my father paint with an intensity and passion that struck a chord within me. I was intrigued about his successful prewar career and the fate of his Nazi-looted art. He had little to show from a collection of hundreds of paintings, drawings, lithographs and etchings. This fueled my passion to find these works and to rescue him from obscurity.

David Friedmann was born on December 20, 1893, in Mährisch Ostrau, Austria-Hungary, now Ostrava, Czech Republic. He studied etching with Hermann Struck and painting with Lovis Corinth in Berlin. He painted some of the most important events in modern history, surviving World War I and World War II as an artist. Friedmann produced late impressionist landscapes, still lifes, interiors, nudes and achieved acclaim as a painter known for his portraits drawn from life. He exhibited at the Akademie der Kunst, Berliner Secession and numerous galleries throughout Germany and Czechoslovakia. His use of light and dark, his ability to convey expressions on faces, the composition, are all hallmarks of his work. With pencil and paper, he captured the great chess champions of the 1920s. In 1924, his quick-sketching skills launched a secondary career as a freelance press artist. He sketched hundreds of famous contemporary personalities from the arts, music, theater, sports, politics, and industry, published mainly in the Berlin newspapers and the radio-program magazine, Der Deutsche Rundfunk. Among the portrayed luminaries were Albert Einstein, Arnold Schoenberg, Thomas Mann, Max Liebermann and Emanuel Lasker.

Friedmann’s flourishing career in Berlin was terminated in 1933 by the Nazi regime. As each of his options narrowed, he continued to produce art illustrating the events and his personal experiences of the time. In 1938, Friedmann fled with his family to Prague, escaping from the Nazis with only his artistic talent as a means to survive. He depicted human fate as a refugee in Prague, as a prisoner in the Lodz Ghetto, in the Auschwitz subcamp, Gleiwitz I, and as a survivor. His wife Mathilde and little daughter Mirjam Helene were murdered in Auschwitz.

In 1941, the Gestapo looted his left-behind oeuvre in Berlin. He lost his studio furniture and materials, hundreds of oil paintings, watercolors, drawings, etching prints and lithographs. After Friedmann’s deportation to the Lodz Ghetto, Nazi authorities looted his Prague art production. In 1946, when mail service from Berlin to Prague was finally restored, Friedmann received portrait prints and photos of his work in an album. The Prague portraits dated 1940 to 1941 gave face to numerous known and unknown victims — historically significant evidence of a dynamic Jewish community destroyed by the Nazi regime. Additional portrait prints were found at the National Museum in Prague, Beit Theresienstadt in Givat Haim (Ihud), Israel, and in two family-owned collections. Numerous works, including portraits and landscapes, surfaced at the Jewish Museum in Prague. 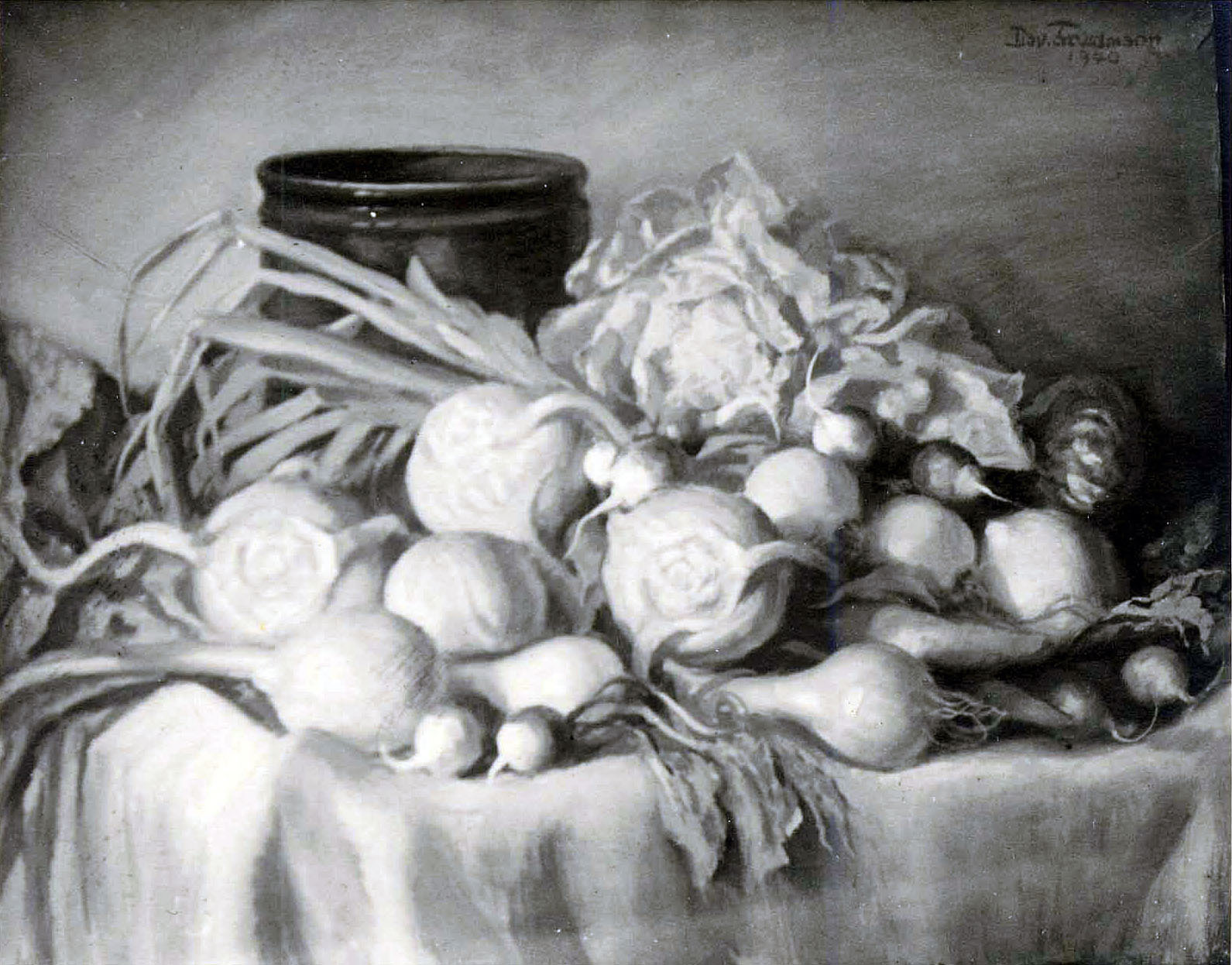 Artwork was systematically confiscated and sold at auction by the Nazi regime. The whereabouts of the remainder of Friedmann’s looted art is unknown.

From his incarceration period, a portrait drawing of a Polish prisoner in Gleiwitz I was discovered at the State Museum Auschwitz-Birkenau in Poland. Evidence also surfaced of Friedmann’s work in the ghetto. His 1942 etching of the Lodz Ghetto bridge appeared as a header on pages of The Chronicle of the Lodz Ghetto, 1941-1944. A handmade album with thirty-three drawings documenting the activities of a hat-manufacturing workshop (“ressort“) in the Lodz Ghetto in 1943 is also held in the collection of the Jewish Historical Institute in Warsaw.

Liberated at age 51, an age significantly older than most survivors, Friedmann believed there was a reason he lived. The responsibility to bear witness weighed heavily on his conscience even before deportation. His burning desire was to show to the world the ruthless persecution and inhumanity as practiced by the Nazis, in the hope such barbarism would never happen again. Friedmann captured the scenes he could not erase from his memory — forced labor, torture, killings and the death march. He called the series, Because They Were Jews!

Friedmann continued to paint throughout his postwar journey. In 1948, in Prague, he wed Hildegard Taussig, a survivor of several concentration camps. Their marriage began at a refugee’s pace. One year later, the couple fled communist Czechoslovakia to Israel, where their daughter, also named Miriam, was born. He worked in a sign shop and contributed to the founding of Israel’s commercial art industry.

Every spare moment he painted for himself. Friedmann’s color palette changed to brighter, sun-filled hues as he left behind his old dark world to explore his newly adopted country. After two years, he established his own advertising business and freelanced for the newspapers, permitting more time for artistic pursuits. Besides portraits, he painted landscapes of Lake Kinneret, Jaffa, Haifa, Tel Aviv, Netanya, Naharia and Tiberias. Some works are signed “Dfri” in Hebrew letters Daled, Peh, Resh, Yod. 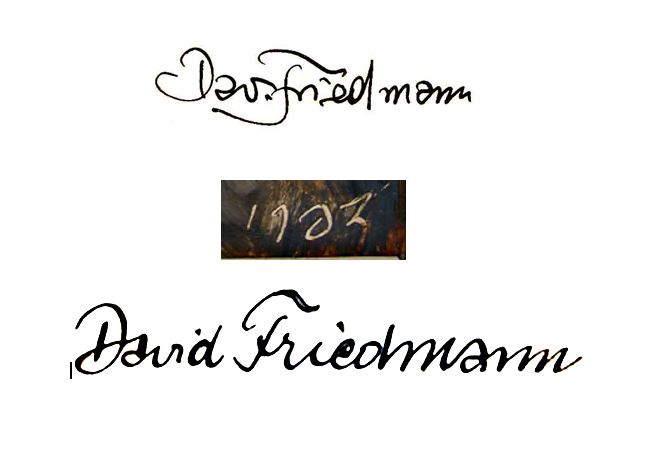 He also enjoyed painting the Yarkon River views and Hadar Yosef, where we lived. Sympathetic to the impoverished Jews who had emigrated from Yemen, he portrayed beggars on the streets to express their plight. David Friedmann had captured the landscape of the beginnings of the Jewish state. Decades later, I had immense pleasure tracking down the dramatically changed scenery he painted, now difficult to find or nonexistent.

Israel was a new state in poor economic circumstances. Undeterred by his being 61-years-old, Friedmann set his ambitions on America, arriving in New York in 1954. He had to forget what was hidden in his heart, the paintings from the concentration camps and make a living. Straight from the boat he auditioned for the billboard company, General Outdoor Advertising (GOA). He painted as fast as possible, because only this would save our family from poverty. GOA did not care about his age or that he barely spoke English.

They were impressed with an accomplished artist who painted with astonishing speed — the same skill that saved his life in 1944 in Gleiwitz I where Friedmann had improvised with primitive materials, making his own paints and brushes out of camp supplies to paint a mural across a barrack’s wall in order to show the SS officers his artistic ability and spare him from death. What could he produce to impress them? He thought of the Havel River, painted in Berlin with “white clouds in the blue sky, trees, and in-between a few small houses with red roofs, water, white sailboats and their reflections on the surface of the water.”

GOA moved the family first to Chicago and then to St. Louis. After only fifteen months in America, Friedmann had been appointed to the top artist position at this branch. Instead of pictures from the concentration camps, he painted the iconic Clydesdales and happy folks selling beer on two-story tall billboards. The new career brought recognition and satisfaction with life in America. In 1960, the Friedmann family became proud United States citizens and symbolically dropped the double “n” spelling of the surname.

After retirement in 1962, his art would not be silent. He produced a second series of Holocaust art to fight antisemitism and race hatred of all people. The David Friedman Exhibition opened in Baltimore, Maryland in 1965, marking 20 years after liberation, and was even reported in the Israeli press.

Friedmann died at the age of eighty-six on February 27, 1980. He is recognized internationally with works on permanent display at the Holocaust History Museum, Yad Vashem, Jerusalem; the St. Louis Holocaust Museum & Learning Center; and the Sokolov Museum in the Czech Republic. His works are in the collections of the State Museum Auschwitz-Birkenau, Poland; and the United States Holocaust Memorial Museum in Washington DC, among other institutions and museums. Exhibition venues include the Berlin Philharmonic Hall in Germany, the Terezín Memorial in the Czech Republic, the United Nations Headquarters and the German Consulate General in New York.

In 1954, Friedmann was among the first to win restitution from Germany for Nazi-looted art. The sum incorporated claims for all his looted property. He continued to fight for justice. In 1961, the International Supreme Restitution Court in Berlin adjudicated an upward adjustment.

David Friedmann was a successful artist with both Jewish and non-Jewish clientele. Art was sold privately, at galleries, exhibitions and auctions. Fleeing the German Reich, most emigrants found it necessary to sell their art to finance an escape. Others managed to flee with their art.

Artwork often continues to find new owners — sold at auction or through private sales — purchased by people who are not known as collectors. Pieces are displayed on walls of family homes for generations, art they enjoyed all these years, not knowing the paintings have a history and the artist’s daughter is searching to find them. David Friedmann artwork has surfaced all over the world — the Netherlands, Denmark, Austria, Belgium, England, France, Germany, Italy, Czech Republic, Poland, Israel, Australia, China, Canada and the United States. I have started to find his prewar art just over the last two decades.

Every painting to emerge is a victory against the German Reich. David Friedmann made important contributions both in the realms of 20th century art and in the creation of materials that play a powerful humanitarian role in educating people about the reality of the Holocaust.

My goal is to publish a catalogue of his works, evidence of the brilliant career the Nazis could not destroy.

For more about David Friedmann and to provide information you may have about existing works, please visit: www.davidfriedmann.org or the “David Friedmann—Artist As Witness” Facebook page.

A Tango in Auschwitz

The Archivists and the Forgotten Boxes: Rediscovering the Victims of the Sajmište Concentration Camp