“The Caine Mutiny”, “The Juggler”, Hemingway – Michael Blankfort and Me

Howard Kaplan looks back on his special relationship with his mentor – legendary Hollywood screenwriter and author, Michael Blankfort Tuesday night, July 13, 1982. Michael Blankfort died today. Twelve highly acclaimed novels; one biography, theatrical plays; a horde of movies, collaboration on the film version of The Caine Mutiny, adapting the film The Juggler from his novel of the same name, the first Hollywood picture shot in Israel starring Kirk Douglas as a Holocaust survivor, 1953.  I met Michael in 1973. I had returned from Israel clutching a 300 page manuscript about my travels and arrest in the Soviet Union. I had heard the name Michael Blankfort as a board member when I attended the Brandeis Camp Institute.

I looked up his number in the phone book. In a rush of nervousness: I was interrogated by the KGB for four days, I had been among the first to meet with the Hebrew teachers in Moscow, told him I’d written a book about my experience and asked if he had time to read it.

That was Michael, he never turned anyone away. The following day I met him in his office. He was 65 and I was 23. For the next nine years we had lunch together about every ten days.

I walked through his world in Beverly Hills that morning in 1982, stood outside the Writers and Artists Building, subsidized by a patron of the arts. It once housed Billy Wilder, Ray Bradbury and Jack Nicholson. An old manual Royal typewriter sat on his desk beneath a cork wall crowded with the pictures and clippings. His row of pipes and classical tapes rested to the right of the paper-strewn desk. Books spilled from the shelves and there was always the volume (or more likely the two) that he was reading at the time, there on the narrow cot against the wall behind his chair.

Though earlier he had shunned art as bourgeois, in the 50s he and his friends started to buy contemporary works they liked and rarely paid more than $100 a painting. Michael’s de Kooning, Montauk Highway, is now on permanent display at the Los Angeles County Museum of Art. His hundreds of other works were all bequeathed to LACMA and I was there at the preview reception in March 1982. I did not appreciate how unique and fabulous my young life was.

Michael lent his precise eye and understanding to everything I wrote. I would leave each of my manuscripts with him, then wait nervously. When he finally called, there were no wasted words. Either there would be praise or he would say quietly, “I’ve read your material. You better come over.” When that happened, I knew as I grabbed a notebook and pen that I would be out of trouble before the long lunch was over — he would exhaust himself repairing my work during the time he should have been resting from his own.

Always lunch. Unlike many people who listed their office numbers and held their homes sacrosanct, Michael did the opposite. The day I looked him up in the phone book, I found only his home number. He thought he wouldn’t be disturbed as much with his office unlisted. It didn’t work. The phone rang constantly and with a humanity I came to be in awe of, he made time for everyone. There was a different name scribbled in pen every day at 12:45 in his little appointment book. In addition to me, there was an entire stable of young writers he helped.

An elegant, dashing man, with a moustache and a full head of wavy gray hair, Michael was always ebullient and full of humor. He had a breadth of spirit: there was nothing small or petty about him, something I only partially achieve as I’m inclined to dream of revenge though I don’t pursue it. And perhaps most of all, he was a lover — of people, and especially of women. The eyes of the maître d’ at the Swiss Café lit up when he came through the door; he always had a few moments to smile that huge smile of his and talk to her. 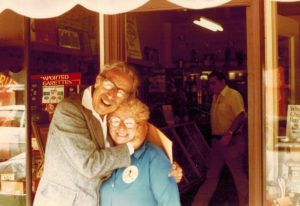 He transformed Mrs. Kramer, a little old lady who owned a tobacco shop near his office, into a young, beautiful woman with all his attention and the way he flirted with her. He went to see her every day, and if he didn’t need anything, he’d buy a candy bar or some gum. But most importantly was Dorothy — Dossy — his wife, partner, companion. He discussed everything with her and made no major moves without her counsel.

Once he took me to see The Juggler (Columbia Pictures 1953), screened as part of a Film Festival at UCLA. He was in a wonderful mood, bear-hugging friends as he always did though a little nervous; he had not seen the movie in over twenty years. I watched Kirk Douglas, as a German juggler, the toast of Berlin who believes he won’t be touched by the Nazis, a concentration camp survivor running through the streets of Haifa, unable at first to accept either his new homeland or what had happened to him.

Afterwards Michael told me that he had been set to direct the picture but the McCarthy hunters had taken his passport. The only part of the movie he saw filmed was the scene of a hora danced around a fire shot in a Hollywood backlot.

Michael’s fiction is a remarkably eclectic yet cohesive body of work. The Brave and the Blind (1940) about the Spanish Civil War which Hemingway panned in a national review and then apologized years later to Michael saying it was a great novel and he had been worried it would eclipse the coming For Whom The Bells Toll. The Strong Hand (1956) about the dead hand that holds back change when an Orthodox rabbi falls in love with a woman whose husband has been killed over the Pacific but not declared legally dead; I Didn’t Know I Would Live So Long (1973) about an out of fashion painter who leaves his marriage and then returns; Take the A Train (1978) about a Jewish boy who befriends a charismatic black con man from who he learns honor.

The day before the accident, Michael came to my Third Annual 30th Birthday Party. In the nine years we had known each other, it was the first time he visited my home. Two years before he had forgotten my (first) 30th birthday party (the second was never held) and called the following morning. He had remembered as he went to bed, and upset, had lain awake much of the night. He wanted to apologize and asked if I would forgive him.

He had finished his new novel on Saturday, the day before the party, and was rereading it. On Monday, he took it home with him as he did each night, stood near the bottom of his steep driveway, the manuscript in one hand, the garage door clicker in the other, pushed the button, lost his balance and toppled backwards. All six feet of him. Unable to break the fall, his head crashed into the cement. Neighbors across the street immediately called the paramedics, then ran to the house to get Dorothy. Though bleeding, Michael was still alert. They exchanged a few words and she kissed him on the lips, twice. He went into surgery, then into a coma and never regained consciousness. The world lost a treasure.   If you liked this article, try these: Back in the USSR: Recollections of an American College Kid Turned Manuscript Smuggler The Stories Behind the Voyage of the Exodus The Housewives Who Took on the USSR to Help Soviet Jewry