The Stories Behind the Voyage of the Exodus 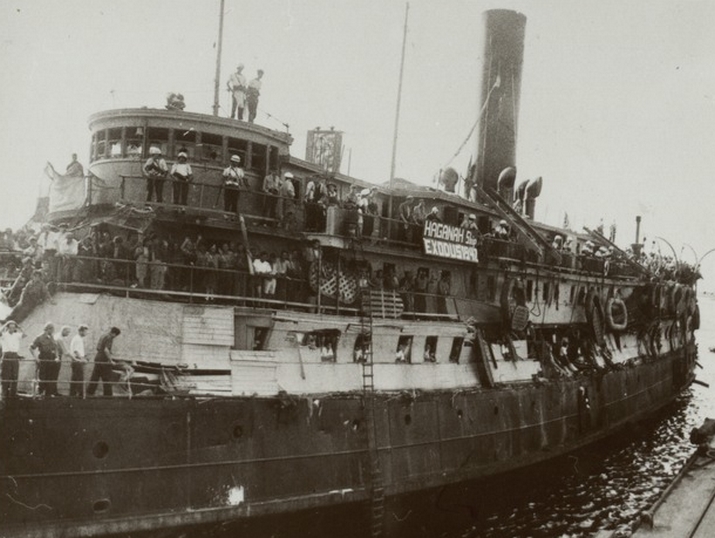 The Exodus upon its arrival in the port of Haifa. The Pritzker Family National Photography Collection at the National Library of Israel

For a certain generation, the story of the Exodus, the ship that carried 4,500 Jewish refugees from post-war Europe to Mandatory Palestine, encapsulates the essence of Israel’s creation – a journey, an exodus – from the hellish depths of the Holocaust to the exhilarating heights of independence and nationhood.

Indeed, there are many who first became aware of the story of the modern State of Israel thanks to “Exodus” – the 1960 Hollywood hit film, though the movie is only very loosely based on the history of the actual ship.

The Toldot Yisrael project, which is hosted on the National Library of Israel’s various platforms, was able to gather several video interviews which tell the true story of the voyage of the Exodus, as well as provide a rare glimpse into events which transpired behind the scenes.

When Monica Levin finally saw the film starring Paul Newman, her father – Louis “Shorty” Levin – shocked his daughter by telling her, “I want you to know that that ship belonged to me…”

Levin had owned the ship back when it was known as the “President Warfield”.

The organization that eventually purchased the ship from “Shorty” Levin was known as HaMossad LeAliyah Bet (“The Institution for Immigration B”). This was a branch of the Jewish underground Haganah organization, devoted to facilitating clandestine, illegal, Jewish immigration to Mandatory Palestine.

To mask its activities, the underground group made use of front organizations which it could hide behind. When it came to buying the President Warfield, things were run through a straw company answering to the very non-Jewish sounding name: “The Chinese American Industrial Corporation”. The only Jew on the company board was a Haganah operative who had a habit for popping up just about everywhere, the future mayor of Jerusalem – Teddy Kollek…

These were trying times. A third of world Jewry had just been annihilated in Europe, and the men and women of the various Zionist organizations had no intention of being deterred by bureaucratic or even legal obstacles getting in the way of what was seen as a matter of pure survival.

Before ships could be arranged to carry Jewish Holocaust survivors from Europe to Palestine, those ships had to have their papers in order. David Macarov was one of those tasked with speaking to diplomatic consuls in New York, who could provide the flag papers necessary to embark on the rescue voyages. Unsurprisingly, Macarov often had to grease a few palms. A typical sentence of his became:

In a surprising twist, David Macarov also revealed how the voyage of the Exodus was tied to the price of bananas on the international market…

A ship to Oklahoma?

Sam Schulman was one of the few who boarded the President Warfield at its home port in Baltimore, on its way to collect refugees from France. Even in a friendly American port, there was a need for discretion and secrecy.

When Schulman reached the pier, he approached the men manning the ship at the docks…

Schulman went on to describe the fateful voyage of the Exodus in detail, including just how the ship was converted to hold so many refugees, as well as the dramatic altercations with the British Royal Navy…

You can find hundreds of interviews with the men and women of Israel’s founding generation here, and you can learn more about the Toldot Yisrael project here.

Thanks to Aryeh Halivni, director of Toldot Yisrael, for his assistance in the preparation of this article.