Despite its somewhat hedonistic and detached image, the city of Tel Aviv faced its share of difficulties during the War of Independence. So what does Leonard Bernstein have to do with all this? 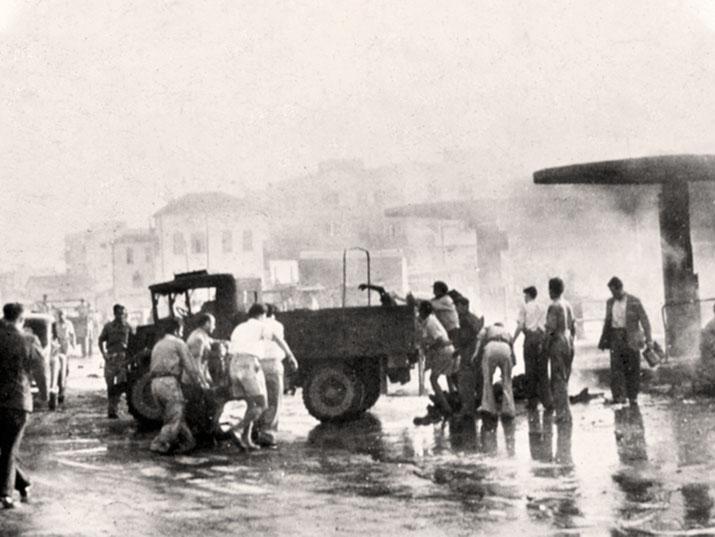 The Tel Aviv central bus station after the attack by the Egyptians. The Herzliya Hebrew Gymnasium collection, Bitmuna

If you’ve read The Other Side of the Coin (Hebrew) by Uri Avnery, you may recall the stories of a sense of bitterness which spread among Israeli soldiers in 1948. This feeling stemmed from the impression that while the soldiers were risking their lives at the various fronts, the citizens of Tel Aviv were going about their merry lives in the bustling Jewish metropolis on the Mediterranean coast. Avnery, a journalist turned activist/politician who would eventually become an icon of the Israeli left, described his feelings in blunt detail from his time on home leave. While this narrative concerning the Tel Aviv “bubble” and its reputation for hedonism remains somewhat relevant to this day, the truth is the city suffered its share of hardships during the most difficult of Israel’s wars. In the spring and summer of 1948, Tel Aviv was bombed repeatedly by the Egyptian Air Force.

And this is where the camera suddenly freezes and our record screeches to a halt. Let’s rewind a bit and get some background: The War of Independence was already underway. Only two days after the State of Israel declared its independence, Egyptian warplanes appeared in the skies over the first Hebrew city. On May 18th, 1948, the Tel Aviv central bus station was bombed in the deadliest attack carried out by the Egyptians. These bombing runs lasted for about a month on a nearly daily basis, until June 11th. Sirens went off incessantly. An additional round of bombings began in July 1948. Simultaneously, in early June, Egyptian ships reached the waters off Tel Aviv and began shelling the city. Later on, Egyptian planes would continue to exploit the vulnerability of the nearly non-existent Israeli Air Force, conducting sorties over central Israel.

Another part of this story begins some time earlier, in the days of the British Mandate, when the acclaimed conductor and composer Leonard Bernstein first arrived in the Land of Israel in April 1947. This was the first time he played with the local Philharmonic Orchestra, and the maestro was immediately captivated by the charm of the small Jewish Yishuv.

It appeared Bernstein not only fell in love with the new country which was struggling to survive; he would also make a considerable contribution to the war effort. On a 60-day tour which included no less than 40 shows, Bernstein performed several times for soldiers scattered in different corners of the land. Some of you may have heard of Leonard Cohen’s special performances for Israeli soldiers fighting in the Yom Kippur war, but it turns out he was not the first famous Jewish “Leonard” to do so.

The lack of a significant Israeli Air Force affected Bernstein’s concerts with the Israeli Philharmonic Orchestra in the Tel Aviv area. David Sidorsky, who was then an overseas volunteer with the IDF and who would later become a professor of philosophy at Columbia University, described one of the concerts he attended. He told of how everyone who was present at the concert – including the orchestra musicians and Bernstein himself – was evacuated to a nearby bomb shelter after an Egyptian plane was identified flying over Tel Aviv.

When the plane had left the area, Bernstein continued conducting Beethoven’s Symphony No. 6. The incident repeated itself 10 or 12 times, according to Sidorsky. Every time a plane flew overhead, a siren went off and everyone headed to the shelter. Every time the ‘all-clear’ signal was given, the crowd reentered the hall and Bernstein and the musicians continued the performance. “He was determined to complete the Sixth Symphony!” said Sidorsky.

Indeed, this wasn’t the only time Bernstein’s concerts coincided with Egyptian attacks. We found evidence of at least one other concert interrupted by Egyptian planes – and there may have been more. In another incident, a crisis almost arose at a concert held in Be’er Sheva for a few thousand soldiers. The large gathering raised the Egyptians’ suspicions and they even planned to divert forces to the area, out of concern that Israel was planning an offensive in the Negev region. Chaim Weizmann, Israel’s first President later commented on the Egyptian reaction: “After all, who would make time for a Mozart concerto in the middle of a war?” In fact, the IDF actually did carry out an attack on a different area of the Negev at the same time, with Bernstein’s concert serving as a diversion.

An estimated 150 people were killed in the attacks on Tel Aviv. Though the city’s suffering was somewhat forgotten within the context of the ongoing war, Tel Aviv’s perseverance and ability to withstand enemy attacks contributed greatly to the Israeli victory in the war. After all, this was the location of headquarters for the IDF and the various underground organizations as well as the institutions of the young state. The war could not have been won, without the homefront doing its part.

The bombs left their impressions on the citizens of Tel Aviv. Years later, a child from the neighborhood of Neve Sha’anan, who had witnessed the deadly Egyptian attack on the Tel Aviv central bus station, wrote a piercing Hebrew poem, based on his painful memories: “It was at the age of three / that my youth was lost forever / on the way from preschool to the shelter // planes with their beautiful wings/ flew swiftly above me / leaving me, my face covered in dust.” This child was Hanoch Levin, who would become one of Israel’s greatest playwrights. The poem, ‘It Was at the Age of Three’ , was given a melody composed by Zohar Levy and included in Levin’s classic play ‘Queen of a Bathtub’.

This article was written with the help of the Toldot Yisrael Collection, which records the testimonies of the 1948 generation.