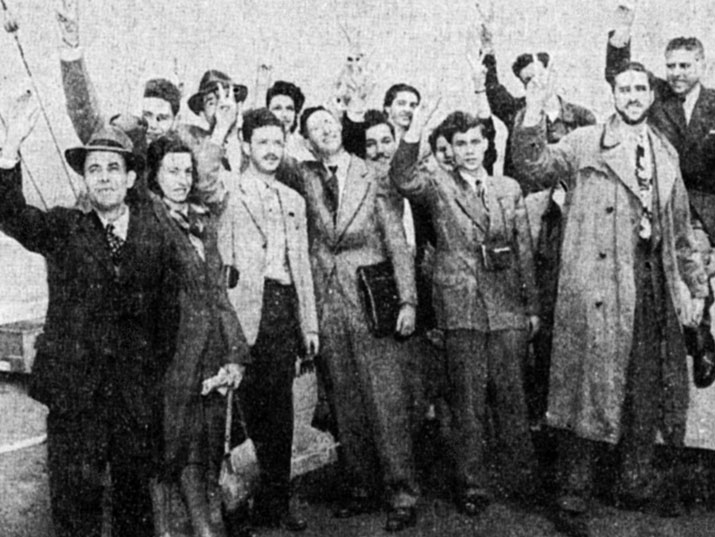 In May 1948, a new regional order took hold in the Middle East. In a single moment, metaphorical walls were erected and routes were cut off. Jerusalem was still under siege and the road to the Negev desert was blocked. International routes that were once used freely by the inhabitants of Mandatory Palestine were now shut down as a result of the war that had broken out. Damascus and Cairo were no longer accessible. In the midst of this new order, just one day after the establishment of the State of Israel, a maritime drama began which would last for a month and a half. This is the story of the American ship, Marine Carp.

This article was written in collaboration with the Toldot Yisrael Collection, dedicated to documenting the testimonies of the State of Israel’s founding generation. This collection is now deposited in the National Library.

The USNS Marine Carp was originally built for the purpose of transporting military forces to Europe and back. Following the conclusion of World War II, the vessel was repurposed as a  passenger ship and set on a regular, commercial route. She embarked out of New York, crossed the Atlantic, and docked in Athens, Beirut, Haifa, and Alexandria. At the end of the route, she returned to New York via Italy. During the post-war period, the Marine Carp transported many American Jews to the Land of Israel in order to volunteer on kibbutzim, attend youth gatherings, or simply immigrate to the Land of Israel legally (if they were able to make it past the various obstacles successfully). The ship set out from New York every five weeks. On May 4th, 1948, Marine Carp embarked on its regular route. There were many Jewish travelers aboard, including Jews from the Land of Israel studying or living in the United States who were answering a general enlistment call put out by the Hebrew Yishuv which was already fighting for its life in the War of Independence.

One of the passengers on the Marine Carp was David Sidorsky, who would later become a professor of philosophy at Columbia University. While a young student in New York, he was in attendance at the UN building during the vote on the partition plan. Following its acceptance, and the ensuing threats of war by the Arab states, the idea of volunteering for combat was planted deeply in his mind. After a brief meeting with Teddy Kollek, then a representative of the Haganah, he received permission to join the division of overseas volunteers and boarded the ship.

But the plans of the volunteers would be halted in their tracks.

When the ship reached Beirut, a stop on its regular route, 400 Lebanese soldiers were waiting for the passengers at port. The Lebanese authorities did not want to allow Jewish men of military age to continue on to Israel. Indeed, 69 passengers, all Jewish men between the ages of 18 and 50, were forcibly removed from the ship. Among the detainees were 41 American citizens, 23 fresh Israeli citizens, 3 Canadians, and 2 others. Some of the Israeli citizens aboard had, in fact, been training in the United States to operate radar systems for the newly formed IDF.

Another passenger on the ship was Muriel Eisenberg, later Muriel Arens when she married future Israeli Defense Minister, Moshe Arens. According to her testimony, the Lebanese forces searched the ship, in which weapons were hidden, and threatened the radio operator not to send any kind of distress signal.

Courtesy of Eliza Arens, Muriel’s daughter, we received pictures taken by Muriel on the deck of the ship, as well as images of the docking at the port of Beirut.

The ship’s crew tried to resist, but their efforts were in vain. Daniel Doron, another passenger (and a great-grandson of Zerah Barnett, co-founder of the city of Petah Tikva). testified:

“Most of the ship’s crew were black. We made friends with them. We would sing with them, drink with them and eat with them. They refused to leave Beirut. They said, ‘We are not leaving, not moving the ship. We are not leaving Beirut without the Israelis.’ It was only when the ambassador convinced them that the incident would be resolved within a week that they agreed to continue on their way.”

The detainees were taken by truck to the city of Baalbek, where they were held in an abandoned French military camp. Daniel Doron reflected on the drive to the camp:

“We drove all night. We departed at 10 o’clock or 12 o’clock at night. That was the most dangerous part because the trucks – Lebanese military trucks – were in bad shape. The brakes did not work very well. They bounced up and down, you know…”

Some of the passengers complained about how the U.S. was handling their detention, and even accused the U.S. consulate in Beirut of anti-Semitism. The United States condemned the refusal of the Lebanese to release the detainees, causing a minor diplomatic incident between the two countries.

While the detainees were transported to Baalbek, the ship continued on to Haifa. Among the passengers on board were the families of the detainees – women and children who were allowed to continue on their journey. It was at this point that a separate drama began to unfold on the ship. Israeli authorities demanded the removal of 25 Lebanese civilians from the ship, hoping to leverage a prisoner exchange. These attempts were apparently unsuccessful, and did not contribute to the efforts to release the detainees in Lebanon. Telegrams sent to the Marine Carp captain on that day are stored in the Israel State Archives.

Once the incident in Beirut became public knowledge, it aroused great interest in the new State of Israel. The local press covered the events extensively throughout the episode.

So, what was the catalyst that eventually led to the liberation of the captive Jews? What finally contributed to stepping up U.S. efforts to end the affair? The official answer has never been revealed.

According to testimony from Daniel Doron, a family member was able to speak to then-US President Harry Truman about the issue. Truman was, apparently, able to find a solution to the crisis over the course of the two weeks that followed the meeting.

“Truman said, ‘What?!’ Then he told him the story. Truman fumed and went to the red phone. He picked it up, and the head of covert services was on the other end. He said, ‘Listen, my friend, either you free these people within two weeks or you can look for another job.’”

The American detainees refused to accept the release that had been arranged for them without their Israeli counterparts. Lebanese attempts to separate the populations had failed. Finally, on June 30th, almost a month and a half after the incident, the Lebanese agreed to release all of the detainees. They were sent back to New York, but many of them were unable to obtain a visa and were forced to stay on Ellis Island. From there, they again departed with the Marine Carp. Some of the passengers, anxious to return to Israel, had not waited to arrive on American shores. They chose to hop off the ship at other ports and found creative ways to get back to Israel. One of the liberated detainees who fled the ship in Italy was Shabtai Teveth, who later became the biographer of David Ben-Gurion. Another well-known passenger was Oded Burla who, over the years, became one of Israel’s most well-known and beloved children’s poets.

The National Library’s Toldot Yisrael Collection contains interviews with four passengers who were on the Marine Carp. Do you know other people who were aboard the ship during that fateful voyage? If so, please let us know.