Hand in Glove? or Not? How Manuscripts Should Be Handled

We decided to check, once and for all, whether gloves are necessary when handling rare manuscripts 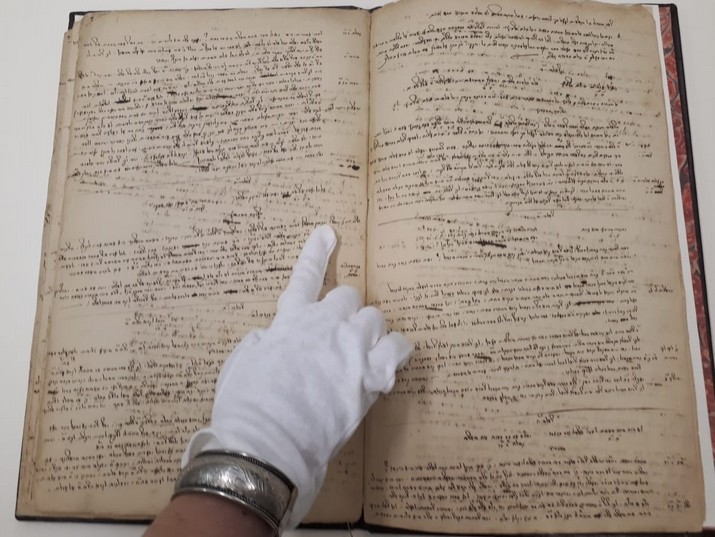 “But why are you handling that manuscript without gloves?!” This is perhaps the most common question scholars come across every time they are photographed with a manuscript. No doubt about it- handling a manuscript with gloves looks much more impressive. However, in most cases – this can actually do more harm than good.

There are two main reasons for this: The first is the issue of sensitivity. Wearing gloves causes us to lose the natural sensitivity in our hand – our sense of touch. This increases the chances that the person handling the manuscript will damage the very work that they are seeking to examine and preserve. This is especially true when it comes to manuscripts with fine or thin pages.

The second reason is that cotton gloves used by libraries and universities around the world can get just as dirty as bare hands – if not more so.

At most, wearing gloves can be said to be a neutral approach (though as aforementioned, it probably does more harm than good). However, many institutions indeed demand that gloves be used due to norms that have been established over time. A strange result of this is that these institutions often don’t bother teaching their handlers how to properly hold and browse through manuscripts, based on the assumption that glove-use is sufficient. An assumption that turned out to be mistaken.

So the next time you’re handling a rare manuscript (and every manuscript is rare, don’t let anyone tell you otherwise), remember that the best way to read it is with bare hands, which were washed in soap and dried carefully beforehand. However, if the manuscript you intend to touch is infected with a harmful fungus or covered in some sort of hazardous material, it is recommended, and even crucial, that you use gloves. In addition, the room should be properly ventilated and a protective mask should be worn as well. Why would a manuscript be hazardous, you ask? In one recent case, researchers at the University of Southern Denmark discovered three books dating back to the 16th and 17th centuries which were covered in a green pigment containing arsenic – a highly toxic substance that would become even more common in the Victorian era, when it could be found in everyday items. At the time, people were not fully aware of the dangers of the substance.

Incidentally, it is unclear when people started using gloves in libraries and universities in order to handle rare manuscripts and books. This is probably a new practice, which began in the second half of the 20th century. Some associate it with the practice of photographers, who as early as the nineteenth century, used gloves when working with negatives. Or perhaps the answer is concealed in the book, The Name of the Rose by Umberto Eco. Have you read it?

Read more on the topic in this study from 2007.   If you liked this article, try these: The Package is Secure: How Jewish Women Were Smuggled to Safety in 19th Century Italy Spotting a Fake: The Flourishing Industry of Jewish Manuscript Forgeries Saving a 400 Year-Old Manuscript