How did the only original written copy of "HaTikvah" arrive at the National Library of Israel? And how does it differ from the version we know today? 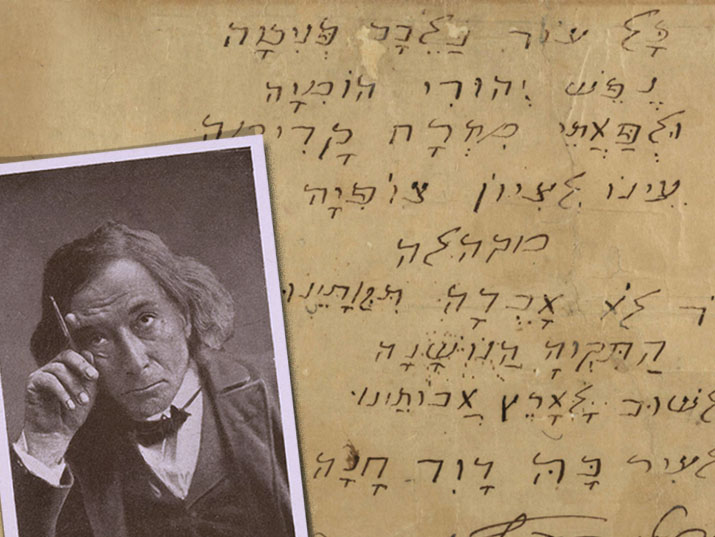 Decades after his death, the writer of Israel’s national anthem, “HaTikvah” would become known as “The First Hebrew Hippie.” A more common moniker, and perhaps more fitting, was “Imber, the Wandering Jew”. Indeed, the title reflects some of the adventures of this man who was a bit of an enigma in the eyes of his contemporaries, and has largely remained one to this day. Even after arriving at the destination about which he wrote so many poems, he only managed to stay there for five years before moving on to continue his wanderings.

In 1882, Naftali Herz Imber closed the shop where he sold matches, charms and amulets in the market of Istanbul, and went to meet Sir Laurence Oliphant, a Member of the British Parliament and businessman. Imber’s initial goal was to declare before Oliphant that the Jewish people didn’t need Britain’s favors in order to return to their ancestral homeland. However, as he described later on, “when I entered, I laid my eyes on Mrs. Oliphant for the first time.” This was enough for the young man to come up with a new plan – a joint journey to the Holy Land. That same year, funded entirely by Oliphant, (Imber was broke and wouldn’t have it any other way), the three reached the port of Haifa.

After arriving in Ottoman Palestine, the members of this strange love triangle parted. The Oliphants, who were essentially Protestant Zionists before the term had even been coined in the modern sense, chose to travel and enjoy the beauty of the land and its holy sites, all while working on a plan to return the Jews to their homeland – which would, of course, hasten the coming of the Messiah.

Meanwhile, Imber, according to every available account, preferred to drink the days away. Whenever he found himself in the proximity of a fair maiden who caught his eye or a patron with enough wine at his disposal, the poet pretended that he had been struck by inspiration at that very moment, proceeding to “compose” the legendary poem which captured the essence of Zionist longing before their very eyes, Tikvatenu – “Our Hope”.

The impressions left by Imber’s time in the Land of Israel can still be witnessed today, in places such as Gedera, Yesod HaMa’ala, Mishmar HaYarden, and Rishon LeZion all of which claim, without exception, that the poem that would later become the anthem of the Zionist movement and the State of Israel, was written within the boundaries of their own territory.

In truth, Imber most likely began to compose the poem which would bring him world fame in the city of Iași in Romania, basing it on a German song, Der Deutsche Rhein (“The German Rhine”), which also opens every stanza with the words “As long as”. In 1884, in Jerusalem, he finally completed the composition. The final version of Tikvatenu consisted of nine stanzas. Later, the poem was abbreviated to two stanzas and some of the words were changed in order to fit the contemporary context of people returning to their homeland. The last modifications were made by Dr. Y.L. Matmon-Cohen, founder of the Herzliya Hebrew Gymnasium high school. Cohen replaced the words “the ancient hope” (hatikva hanoshana) with the words “The two-thousand-year-old hope” and replaced “To return to the land of our fathers, the city where David encamped” with “To be a free nation in our land, The land of Zion and Jerusalem”. These changes sealed the final version of the song, with its new name, “HaTikvah”. In 1886, a farmer named Samuel Cohen composed a tune for Imber’s anthem of longing.

Three years later, when the farmers of the Jewish settlement of Rishon LeZion rose up in rebellion against Baron Rothschild’s bureaucrats, they would choose “Tikvatenu” as their protest song. Imber, who at that time happened to be visiting Rishon LeZion, was lucky enough to hear them singing – as he sat at the dining table of one of those very bureaucrats. This event marked the beginning of the song’s ascent into the heart of the Zionist pantheon, and it also served as Imber’s sign to continue his wanderings. He soon left for England, and from there on to New York.
During the last year of his life, Imber was admitted to a Jewish hospital in New York, where he met a young singer – Jeanette Robinson-Murphy. At her request, he wrote down the original words of the first two stanzas of his song, which would become the national anthem, on a piece of hospital paperwork that was at his disposal at that moment. In 1936, Ms. Robinson-Murphy sent the manuscript, the only one of its kind in the world as far as we know, for eternal keepsake at the National Library of Israel in Jerusalem.