Marvin Antelman, an American rabbi and conspiracy theorist, was one of the many strange figures who wrote letters to Gershom Scholem, the distinguished scholar of Jewish mysticism. Scholem, however, was not impressed... 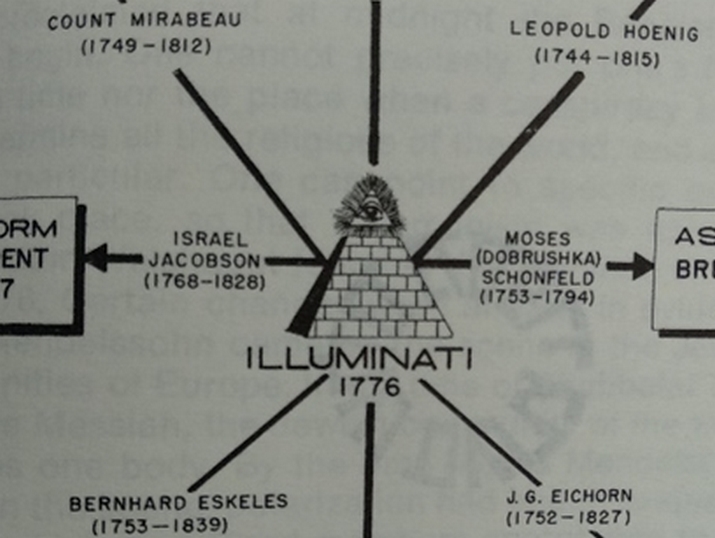 Gershom Scholem loved to write in his books. He wrote many types of comments; bibliographical, content, cross references, etc. Occasionally he also took swipes at other authors by pointing out flaws in their research. These comments usually appeared on or across from the title page. On one book he wrote “a waste of nice paper”, on another “woe is to the teacher that this [author] is called his student.”

In one particular volume, Scholem wrote “Nonsense based on me!!!​”. These words were scribbled on the inside cover of “To Eliminate the Opiate: The Frightening Inside Story of Communist and Conspiratorial Group Efforts to Destroy Jews, Judaism and Israel“, by Rabbi Marvin S. Antelman, published in New York – Tel Aviv in 1974.

In his work Antelman (who also held a PhD in chemistry) painted a detailed conspiracy theory incorporating the Jewish Enlightenment, Reform Judaism and Communism, tracing their origins back to the false messianic movement of Shabbtai Zvi, his Polish successor Jacob Frank, the Illuminati movement and Jacobin Society.

Here is where Scholem, the preeminent scholar of the Sabbatean movement enters our story. Antelman references him regarding the possible influence of the Sabbatean movement on the development of the Jewish Enlightenment and Reform movements but goes well beyond Scholem’s noting of a possible cultural influence –  Antelman lunges into a full-fledged conspiracy theory, so complex as to be beyond the scope of this article.

Interestingly, Antelman’s book got him into hot water with the rabbinic establishment in his home town of Boston, where he was summoned by the local rabbinic court to defend the book. It wasn’t Antelman’s outlandish claims concerning the Reform movement and the Sabbatean roots of Communism that raised the ire of the Boston rabbis, however. What really got them upset was Antelman’s decision to take sides in a fierce 18th century controversy, by claiming that the famous sage Rabbi Yonatan Eibeschutz was a Sabbatean (a position also shared by Scholem). Antelman wrote back at length defending his position based upon prior rabbinical authority (Rabbi Yaacov Emden and others) and refused to submit to the authority of the Bet Din of the Massachusetts Council of Rabbis unless they met various conditions, including being able to call scholarly witnesses (Gershom Scholem?) to testify on his behalf.  He also mentions that he had at one time served as the New England Coordinator for the JDL [Rabbi Meir Kahane’s Jewish Defense League]. It is also telling that whereas Antelman titles the subject of his letter “Reply to your summons…to answer heresy charges”, the word “heresy” appears nowhere on the actual summons that he received from the rabbinic court. . He later turned to a rabbinic court in Los Angeles which vindicated him of the charges.

Antelman sent the rabbinic court correspondence to Scholem, along with a personal letter. Scholem kept these letters together with the book in his collection.

In the 1990s Antelman published a Hebrew book on R. Yonatan Eibeschutz (Bechor Satan) detailing his prior claims, and here as well he relied heavily on Scholem’s research. In this book he published a copy of the letter from the Los Angeles Bet Din exonerating him of the heresy charges leveled in Boston.

This letter explicitly mentions “Professor Gershom Shalom” [Scholem] as the authority upon whom Antelman based his research regarding R. Eibeschutz. The Los Angeles rabbinic court even threw its support behind Antelman’s strange theories, claiming in the letter that he was “enlightening the Jewish reader in the danger of Reform, Conservative and Jewish Communists”. It is interesting to point out that though Scholem’s work was cited as a source by both Antelman and his friends in California, Scholem himself was hardly a typical example of Jewish orthodoxy.

Antelman eventually went on to serve as “Chief Justice” of the “Supreme Rabbinical Court of America” that he founded. Among the more dramatic acts of the court was the excommunication of American Secretary of State Henry Kissinger in 1976.

In his later years he was active in finding solutions for women who had difficulties receiving an halachic divorce. Antelman eventually made Aliyah and spent his last years in the Israeli city of Rehovot.

The author thanks Rabbis Elli Fischer and Daniel Yolkut for help with this research.

Robinson Crusoe in the Languages of the Jews