So What’s the Deal with Shavuot?

Home > Shavuot > So What’s the Deal with Shavuot?
Judaism

Ladder cakes, all-night prayer sessions and tractor parades! The strange evolution and quirky traditions of one of the oldest holidays in the Jewish calendar... 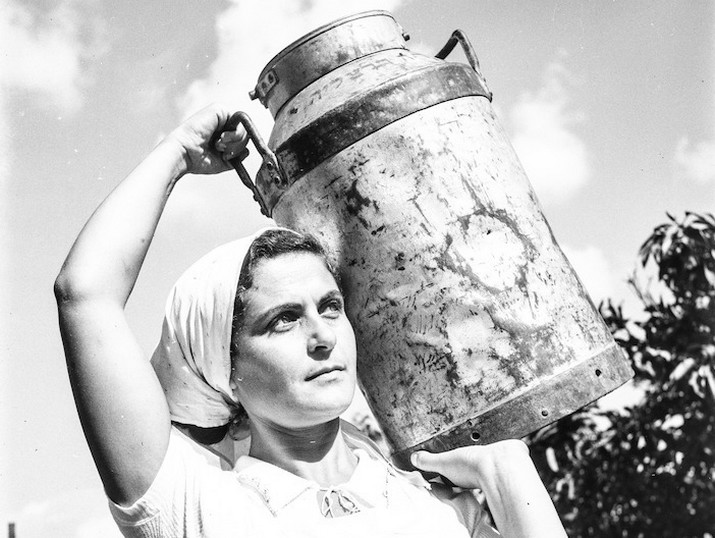 A kibbutz member carries a milk can, 1941. Photo: Rudi Weissenstein, the Photohouse Collection

The Festival of Shavuot is the second holiday of the Shelosha Regalim, the three Biblical pilgrimage festivals. The holiday has many names, the most widely used are Chag HaBikkurim (Festival of first fruits), Chag HaKatzir (Festival of the Harvest), and Chag Matan Torah (Festival of the Giving of the Torah).

Common customs of the holiday include Tikkun Leil Shavuot (an evening of study held on the night of Shavuot), as well as the reading of piyyutim (Jewish liturgical hymns) and azharot (warnings).

The Book of Ruth is also read on Shavuot. Tradition has explained this in a variety of ways. The Book of Ruth deals with an act of kindness that takes place during the harvest. It tells the story of Ruth the Moabite, who accepted the Torah and joined the people of Israel. At the end of the story, which takes place in the vicinity of Bethlehem, it is told that Ruth is the great-grandmother of King David. Thus, we see that a number of Jewish values underpin the Book of Ruth, including kindness to strangers, the rewarding of acts of benevolence, acceptance of the Torah, and the legitimacy of the kingship of the House of David. The reading of the Book of Ruth on Shavuot reaffirms these values.

Another custom popular among Israeli communities on the Festival of Shavuot is the eating of dairy products. The reason for this is not exactly clear, but some claim that the roots of the custom date back to when Moses brought the Torah down to the People of Israel from Mount Sinai. The Israelites supposedly didn’t have time to slaughter livestock and prepare meat to celebrate the event, and therefore turned to dairy foods instead.

The National Library archives contain notes by the folklore researcher Yom-Tov Levinsky, in which he documents the Shavuot traditions of different ethnic groups. The following description can be found among them: “In Ashkenazi communities it was customary to bake cheesecakes in celebration of the holiday, ‘Mount Sinai’ cakes filled with fruit and cheese”. However, Levinsky does not describe the preparation of dairy foods alone.  The motifs of Mount Sinai and Moses’ ascent to receive the Torah on the mountain unleashed the creative memory of different communities: “In Italy they would bake sulam (“ladder”) cakes, for sulam is numerically equivalent to Sinai in gematria [the system which attributes a numerical value to each Hebrew letter]. Among the Sephardic Jews there is a custom still common today to bake a “siete cielos” (seven heavens) cake for Shavuot, in honor of the seven heavens from which God descended to Mount Sinai, or alternatively, commemorating Moses’ passing through the seven heavens until he reached the Divine Seat of God in order to receive from him the Torah for the People of Israel.“

The baking of symbols for the Feast of Shavuot is documented by Levinsky as a custom among the Jews of Tripoli in Libya, who would bake all sorts of symbolic cakes: “We make ladder-shaped biscuits because it was a ladder which Moses used to ascend to Mt. Sinai. Moreover, sulam (ladder) is numerically equivalent to Sinai.” But ladders were not the only symbols baked by the Tripoli community. Hamsa hands, the tablets of the covenant and even doves would often emerge from the ovens as well: “We prepare hamsa hands because one holds out one’s hands to receive the Torah, and we prepare two tablets of the covenant like those we received on the day the Torah was given on Mount Sinai, and we also bake dove-shaped biscuits symbolizing the People of Israel who received the Torah [peacefully] like a dove.”

In the Land of Israel, before the establishment of the State of Israel, Shavuot was chosen as the day to express the connection of the Jewish People to the Land. In the agricultural settlements, the tradition of harvest ceremonies and the presentation of the first produce of the season was re-established. Especially notable is the tradition of bringing forth the first fruit, which became central in the kibbutzim. This was an opportunity to display the achievements of the kibbutz farmers, who had spent the year toiling in the fields. Kibbutz members would parade their decorated wagons, heavily loaded with fruits and vegetables, showcasing the latest available innovations in agricultural machinery, as their families and friends looked on, including all of the babies born on the kibbutz since the previous Shavuot.

In addition, a theatrical aspect developed with parades gradually becoming more elaborate and plays and performances being staged in front of large audiences. In the archives of the National Library there are numerous documents attesting to this aspect of Shavuot in the kibbutzim. Standardized forms of the “Inter-kibbutz Festival Committee” including suggestions as to how to decorate the wagons illustrate the visual aspect of the holiday: “A car whose sides have been removed and covered with tent cloth until it resembles a sort of a hill, on which the various grains are suitably arranged in a natural fashion“. The dairy production branch could opt for the following suggestion: “A decorated cow, whose horns are coated in gold, carrying a basket in which a calf has been put“. The committee even thought of the fisheries: “A boat on a wagon. Nets and fishing equipment. The fish itself – the first produce to be presented – should be placedin the net“.

The documentation at the National Library also includes humorous takes on this kibbutz tradition. For example, in Beit Zera, those working in the fisheries would recite in Hebrew: “Look here and see, we’ve brought you every kind of fish, to enjoy the feast in glee“. But in most cases, the preparations for the celebrations actually had a serious tone to them, as did the performances themselves. The authorities of the Kibbutz Movement were also strict in demanding a detailed report from the kibbutzim as to what had been done on each day of the festival, what content was chosen for the performances, which biblical verses were used for the public signs and so on.

Unsurprisingly, children were often involved in the various holiday celebrations and performances, but there were some who felt this was inappropriate. This approach is evident in documents held in the National Library, including forms sent out by the “Inter-Kibbutz Festival Committee”. On one of these forms, representatives of Kibbutz Beit Hashitah wrote the following: “The festival of Shavuot is the festival of those who sowed and planted and hoped all year long, and they are those who deserve to sincerely rejoice and exhibit that which they have produced. The children did not sow in tears, nor did they reap in mirth (except for on the children’s farm), therefore it will be a sacrilege and a lack of respect to allow the children to represent this moment of seriousness and happiness in the festival. The children shall be made part of the celebration in accordance with their participation in the work […]. If there is no truth in the festival, it cannot in any way express or satisfy those who celebrate it.“

It was not only the agricultural communities that marked Shavuot with parades. The National Library collections include posters from the 1920s and the 1930s inviting the public to large popular parades in the cities. The Histadtrut (the National Workers’ Union) used to organize Shavuot parades in the streets of Haifa. Similar parades took place in Jaffa and in smaller towns. Shavuot was an opportunity to identify with the agricultural and ideological backbone of the Jewish settlement in the Land of Israel. There were even organized tours of kibbutzim and moshavim which allowed the city folk, for a fee, to watch the colorful parades of the proud Zionist farmers as they exhibited their fresh produce and shiny metal tractors to rapturous applause.

The Opposition to the First “Jerusalem Reunification Day”