The Story of the First Hebrew Animated Film 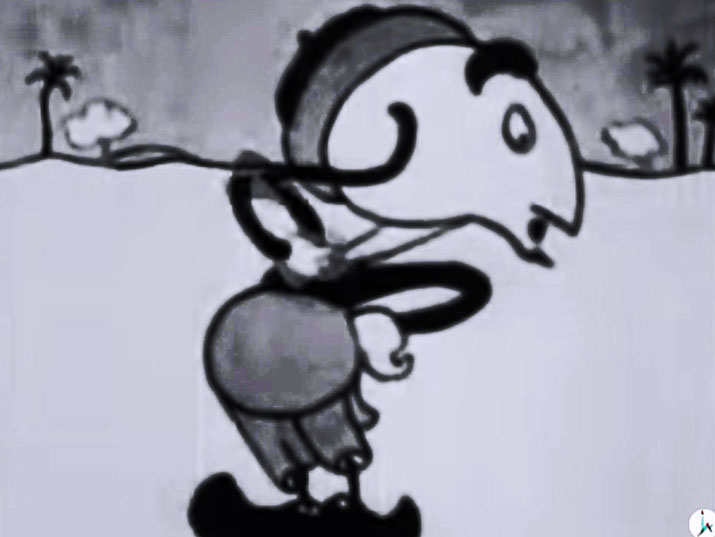 A young Yemenite-Jewish boy wanders the streets of Tel Aviv. He tries his hand at a string of jobs, but doesn’t last long at any of them. He looks for love and finds it, but only after many trials and tribulations, including floating above 1930s Tel Aviv while clutching hold of a cluster of balloons, for example. This is the basic plot of “The Adventures of Gadi ben Susi,” considered to be the first Hebrew animated film ever made.

The original Gadi ben Susi, you may recall, was one of the twelve spies Moses sent into the Land of Canaan ahead of the entry of the Israelites. He was a representative of the tribe of Manasseh, and this was the only time his name appeared in the Bible. Those familiar with the story will remember that, with the exception of Kalev ben Yefune and Joshua ben Nun, all the spies were considered sinners because they spoke critically of the land. This then is the possible allusion contained within the name of the star of our film. Was there any special intent in selecting this biblical name or was it just a random choice? We’ll let our readers decide.

Young Gadi, as noted, was apparently a newly-arrived immigrant who, based on his hair and clothes, was born in Yemen. According to the captions, his immigration to the Land of Israel transformed him into a new man and now, the time had come, after having studied Torah, for Gadi to find work. Setting out to roam the streets of little Tel Aviv, he hears a cry for help, but like Don Quixote, he misjudges the situation and ends up in trouble with the police. Next, he tries his hand at selling ice cream and roasted almonds, against a backdrop featuring iconic Tel Aviv buildings of the day, such as the famous Herzliya Gymnasia high school.

The style is entirely dream-like and surrealist: limbs can suddenly stretch to outrageous lengths, Gadi is swallowed up by an ice cream truck, and his future lover is able to save him from a deep well with the help of an especially flexible palm tree and, of course, the power of love. The plot is rather lacking and the characters are two-dimensional, but a twist lies in wait. We won’t give away the ending, however.

A few technical details about the film: it is silent and contains no soundtrack whatsoever. The plot is advanced with the help of slides containing narrative text and dialogue.  The drawings are in black and white. It is eight minutes long and was produced in 1931. For the sake of comparison, we should bear in mind that four years earlier, another black and white animated film starring a famous mouse had captured the world’s imagination. Alas, this was not the fate of our Gadi, whose own creators would end up making fun of him.

The film was produced by the Agadati brothers, Baruch and Yitzhak, who were among the founders of the Hebrew film industry in Israel. They hired the talented poet Avigdor Hameiri to write whimsical rhymes for the project, and the artist and cartoonist Arye Navon, who was put in charge of animation. Much can be written about all of them, beginning with the fact that all three arrived in Mandatory Palestine on the famous ship Ruslan. However, we will focus here on the illustrator, whom we can safely call the first Hebrew animator in the Land of Israel.

Arye Navon was born in Ukraine and as mentioned, arrived in Palestine in 1919 with his family. He and two of his brothers, three out of a family of five siblings, became artists. Over the course of his long career, he drew caricatures for the Do’ar HaYom newspaper, as well as for Davar. In addition, he illustrated books by major authors and poets, painted portraits, designed scenery for the theater and created comic strips.

In his autobiography Bekav u-bekhtav (“In Line and Script”), published shortly before his death, Navon concisely described the process of the making of the animated film (he even mistakenly called the character “Yossi ben Gadi”): “For around ten days I sat in [Agadati’s] studio and drew many pictures. Agadati, together with his brother Yitzhak, photographed the drawings on the animation table, which was quite primitively constructed. The electric lamps that lit the illustrations were placed on top of a special structure. Yitzhak would climb to the top and adjust the light from there. Another problem was that the light attracted flies, which would land on the drawings. In the screen test, these photogenic flies looked like elephants . . . it was a pretty awful film. Walt Disney did it much better. At any rate, it was the first animated film in the country.”

Returning once again to our Gadi, this “pretty awful” film did not leave much of an impression on the Israeli film industry, and its single claim to fame is that it was indeed “the first.” It played for only a week before it disappeared into oblivion. Luckily, it can still be viewed today thanks to the Steven Spielberg Jewish Film Archive.