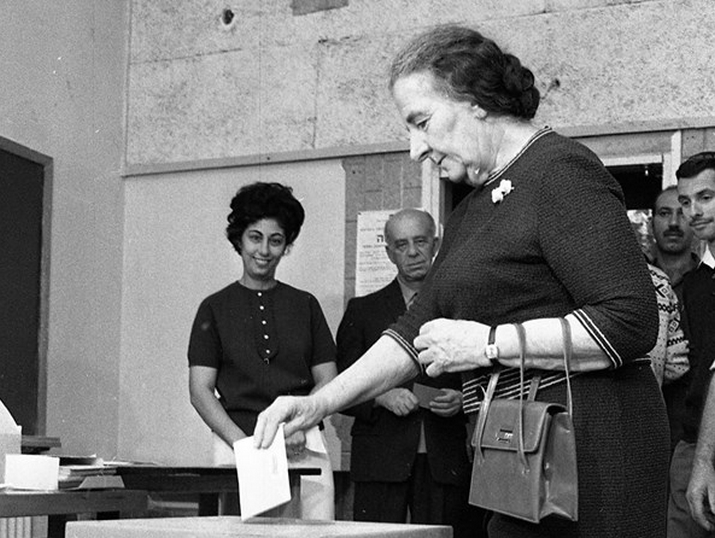 Besides being the year of two elections, 2019 also marks half a century since one of Israel’s most peculiar and pivotal political contests, when David Ben-Gurion, Golda Meir, and Menachem Begin each led a faction into the country’s first polls after the Six Day War.

The elections for the Seventh Knesset were held in October of 1969. Just over two years after the miraculous victory of 1967, the country was coming down from its euphoria and the War of Attrition was taking its toll. The country’s “forgotten war” would claim the lives of some 1,000 Israeli soldiers in just three years, lost in numerous skirmishes and missions along its newly expanded borders with ever-belligerent neighbors.

While security and conflict with those neighbors were always hot election topics, 1969 marked the first time the political and geo-political ramifications of those expanded borders became campaign issues, which they remain to this day.

The 1969 elections came following the death of Levi Eshkol, the first Israeli prime minister to die in office. Golda Meir, who came out of retirement to replace Eshkol, led the country for more than six months despite not being chosen in a general election. She and her HaMa’arakh (The Alignment) faction would go on to win big in the ’69 elections, nearly securing a Knesset majority on its own with 56 seats – a feat unimaginable in today’s political realities. Even more inconceivable is the fact that the faction she led prior to the election held even more seats. Golda would remain prime minister for another five years, winning reelection just after the Yom Kippur War, only to ultimately resign a few months later once it became clear that she had lost the trust and support of much of the Israeli public and her own ruling party.

The Seventh Knesset elections would also be the last for founding father David Ben-Gurion, who was known to call Golda “the best man in government”. After serving as the young country’s prime minister for much of its first two decades, “The Old Man” had refused to join The Alignment as part of the Rafi party he had founded four years prior. Instead, he started yet another new party, HaReshima Hamamlakhtit (The National List), with former Mossad head Isser Harel. They secured a paltry four Knesset seats in the 1969 race and Ben-Gurion retired from public life the following year. Strangely enough, what remained of their National List would go on to become a founding faction of Menachem Begin’s Likud Party.

Following the October 1969 elections, Golda Meir set out to form a government. Though Ben-Gurion’s National List sat in the opposition, Golda and Begin joined forces for the common good, and a 102-member strong left-right-center, secular-religious-traditional, Jewish-Arab coalition was formed.