He was the complete package: actor, singer, dancer, impressionist and entertainer. A relative of Danny Kaye reminisces about the actor, singer and comedian with the big Jewish heart. 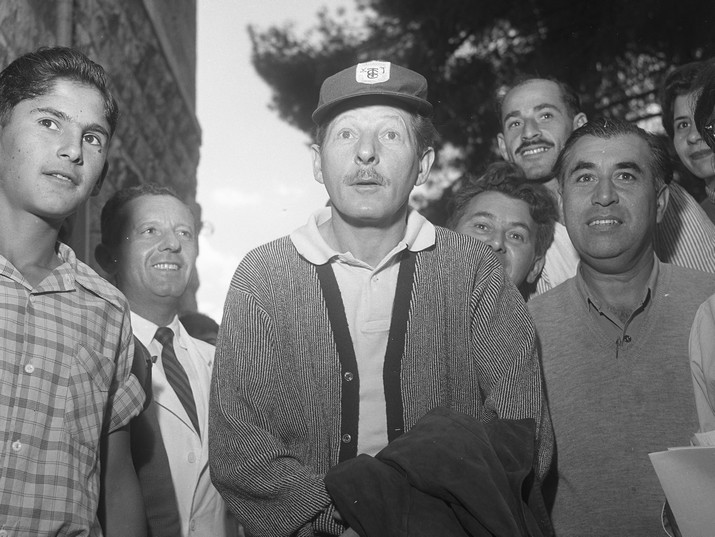 Danny Kaye in Israel, the Eddie Hirschbein Collection, the National Library of Israel

I first learned about Danny Kaye from pictures in our family albums and from stories my mother told me about “the uncle from America,” and from neighbors in Netanya who met him when he came to visit his cousin (my grandfather), Marion Kaminsky.

Danny Kaye, born David Daniel Kaminsky, was blessed with talent: in addition to his stage abilities and some unique talents (as exhibited in the song Tchaikovsky, in which Kaye reels off the names of dozens of Russian and Polish composers, some famous and some obscure, at lightning quick speed – the tune is less than a minute long), he also had an amazing musical sense, despite never having played an instrument. With captivating humor he offered living proof of his talent while conducting various orchestras. He is fondly remembered for having conducted the Israeli Philharmonic Orchestra at a number of benefit performances for Israel (which he visited dozens of times over the course of his life and unconditionally supported during difficult periods, including wartime). He was, moreover, a great pilot and a decorated chef, specializing in Chinese cuisine.

In the early years, Israeli public television would broadcast the best of this Jewish comedian’s films, including Merry Andrew, The Court Jester (a wonderful movie), Wonder Man (according to many – his best film), White Christmas, The Secret Life of Walter Mitty, Knock on Wood, and Hans Christian Andersen. It is true that over the years, the glamour of some of Kaye’s movies has faded and some of them may now seem somewhat outdated. But, and this is a big “but,” nothing will diminish the greatness and virtues of this wonderful artist. Even in his most mediocre films, he was the complete package: a fine actor, graceful dancer, wonderful singer, and excellent impressionist and entertainer.

By the early 1970s, Danny Kaye had stopped appearing in films. He was focusing mainly on television (the award winning The Danny Kaye Show) and humanitarian activity such as his work with UNICEF. Besides receiving the Oscar for lifetime achievement in the early 1980s, Kaye also gave some unforgettable performances on the small screen, including in dramatic roles. In the excellent television drama Skokie (1981), based on a true story, Kaye played the role of Max Feldman, a Jewish Holocaust survivor who was one of the leaders of the protest against the proposed Neo-Nazi march through the village of Skokie, Illinois, home to many Jewish Holocaust survivors. The elderly Kaye was already suffering from heart disease, but he insisted on playing the part despite his declining health.

And let’s not forget his warm Jewish soul, because there never was and (it seems) there never will be a truer friend to Israel in Hollywood than Danny Kaye.

On leaving Israel after his first visit in 1956, he said: “I now have a real reason to be sad. As the moment of my leaving this country approaches, I am filled with more and more sadness. I want you to know that I leave Israel a different man than when I arrived. My visit to Israel was the greatest experience of my life. I was given a new perspective. My faith is renewed. I see people standing taller and straighter here than in any other country I have visited. Believe me, I haven’t been able to sleep at all these past few nights because of my excitement and high spirits. I plan to return to Israel soon, maybe even sooner than you think. But then I won’t come as a representative of the UN or as an American ‘star,’ or even as a tourist — I will come as a simple Jew.”

He promised to return and he fulfilled that promise!

May his memory be a blessing.

Written by Meirav Kaye, a relative of Danny Kaye, and Erez Bar, a scholar of culture and a lecturer on film and music

What Did Barbra Streisand Write to Assi Dayan?