Who Stood with the Orphans When the Nazis Came?

Home > Antisemitism > Who Stood with the Orphans When the Nazis Came?
Diaspora

Meet Doctor Henryk Goldszmit who refused to leave the Jewish orphans to face the Nazis alone. 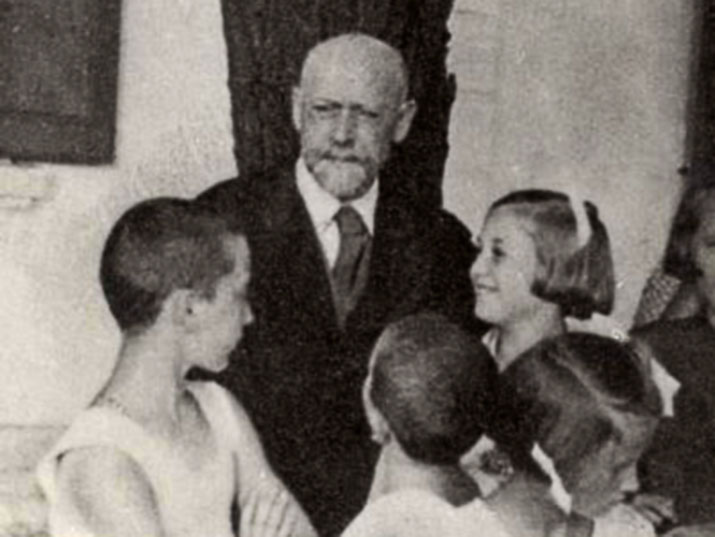 Janusz Korczak, in the yard of the orphanage, the Ghetto Fighters' House Archives

Doctor Henryk Goldszmit makes his way to the Jewish orphanage he founded on Krochmalna Street. As he passes through the gates, he is greeted with the joyous cheers of excited children, happy to see the kind doctor return once again.

In the Polish landscape of the early 1900s, this orphanage was considered atypical compared to other orphanages of the time. Dr. Goldszmit, an advocate for children’s rights, created a system wherein the orphanage was governed by a children’s parliament and courthouse. The parliament set the rules that everyone, including the staff, had to follow. Every child was also fully entitled to summon to court any resident of the orphanage who had injured or harmed them in any way – including the warden and the doctor himself.

Beyond having administrative and judicial power equal to their caretakers, the children in this orphanage received special attention from the institution. This included a higher level of medical treatment, proper nutrition, and most importantly, they were treated warmly and humanely, their dignity and rights were upheld and they were treated with remarkable understanding and patience for their emotions.

Doctor Henryk Goldszmit was not just a successful and well-regarded doctor; he was a war veteran, an accomplished philosopher, storyteller, author, lecturer, host of a popular radio show, and the founder and editor of a popular newspaper written entirely by children.  He was also a well-respected researcher and educator. Despite his many accomplishments and achievements, few know his true name. Most people know him only by his pen name: Janusz Korczak.

In 1937, as the flames of anti-Semitism spread across Europe, Korczak was forced to give up his many high level positions and end his involvement in the Polish orphanage that he ran alongside the Jewish orphanage. He penned a letter expressing his desire to leave Poland and move to the Land of Israel: “I have made a decision: I would like to live out my final years in the Land of Israel, for the time being in Jerusalem. There I will learn the Hebrew language in order to move to a kibbutz after a year.”

His vision for the future never came to fruition despite having visited Israel several times. Korczak remained forever faithful to the children of the orphanage and thus, remained in Poland.

Zrubavel Gilad, an Israeli author and poet, visited the orphanage in Poland in 1938 where he had the chance to experience the unique atmosphere the doctor had created for the young orphans. “When we entered the home we were greeted by loud cheers from the joyful children- the standard exuberant welcome for the beloved doctor,” Gilad recounted.

In 1940, the Jewish orphanage was forced to move from its comfortable and familiar home on Krochmalna Street to the Warsaw Ghetto. The orphanage became crowded and cramped as the number of orphans in the small residence nearly doubled. There, in the shadow of poverty, hunger, desolation, and the spreading plague of typhoid, Korczak fought daily to ensure his children at the orphanage had enough food to live a decent life in as much as the circumstances allowed.

Inside the walls of the ghetto, Korczak continued to run the orphanage with his unique philosophy, producing cultural events and special activities such as concerts and plays to keep the children busy, entertained and happy.

On the 5th of August, 1942, Korczak was forced, along with 192 children and the 10 members of his staff, to leave the safety of the orphanage and march to the main square of the Warsaw Ghetto where they were to board the train to the Treblinka death-camp.

The well-renowned and beloved doctor was offered an escape, a chance to save himself from the inevitable death that faced the passengers of the train. Instead, Korczak marched, head held high, alongside the orphans, as they drew closer to the final ride of their lives.

With a child on each side, and a child in each arm, Korczak marched towards the train, refusing to leave behind the Jewish orphans. They marched together, the children and their greatest friend and advocate.

The witnesses of this scene who survived to share the experience expressed a feeling of unbearable sadness, despair and complete helplessness at the sight of the innocent children and their teacher as they were led to their deaths. They described the doctor, leading the crowd, proud and dignified. One of humanity’s gentlest and most noble figures was ultimately murdered, during that dark and cruel chapter of human history.

When the Nazis Desecrated the Jewish Cemetery of Salonika