Three years into their imprisonment in Africa, the exiles published a book documenting the detention from which they repeatedly tried to escape 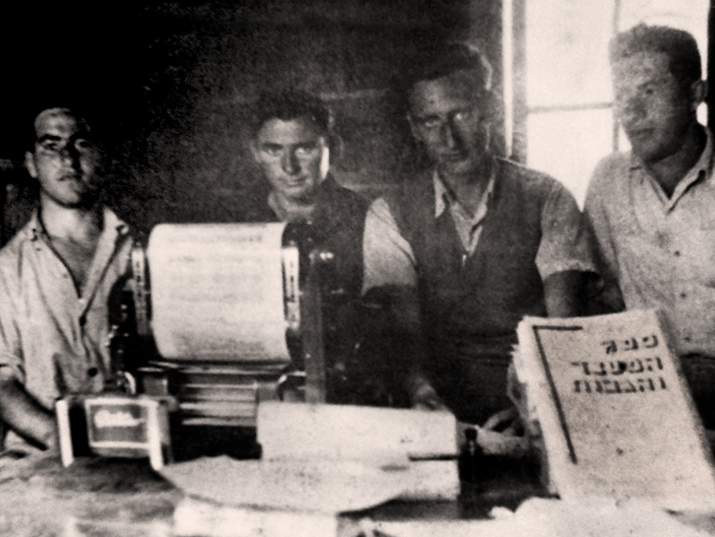 The exiles’ printing press in Kenya

As the Allied hold tightened on the Third Reich, the leaders of the underground Irgun movement in the Land of Israel began to shake off the policy of reconciliation that had been imposed on them since the outbreak of World War II. They renewed arms and efforts against that old enemy of Jewish independence in Palestine – the British Mandate authorities. From the outset, members of Lehi {also known as the Stern Gang) refused to participate in the truce. But, they found themselves reinvigorated by the Irgun’s return to the fight.

In response to the Jewish “terror” that threatened to ignite the situation, the Chief Secretary and Acting High Commissioner of the British Mandate, Sir John Valentine Wistar Shaw put together several proposals as to how to deal with the rogue Jews (the High Commissioner himself, Sir Harold Alfred MacMichael, was recovering at the time from an assassination attempt by Lehi on August 8th, 1944). The recommendations focused on two initiatives: Shaw suggested initiating a series of articles in the British and American press denouncing what the British saw as Jewish terrorism in Palestine, while simultaneously publishing a joint declaration against it by the army and the Civil Administration.

Alongside these two initiatives came a practical recommendation from the Chief Secretary: the forced deportation of hundreds of Irgun and Lehi members held in detention camps at Latrun and Acre. Of the three options proposed by Shaw – Cyprus, Cyrenaica and Eritrea – Eritrea was chosen as the destination of the captive fighters. While the political future of the Land of Israel was unclear, putting a great deal of distance between the problematic prisoners and Palestine greatly appealed to the Mandate authorities. They felt that the chance of escape from Eritrea was slim.

In the early hours of October 19th, 1944, 251 detainees from the Latrun and Acre prisons were loaded onto British Air Force planes. No women from the underground movement were sent to Africa. The few female prisoners who had been held were released in advance. At noon on October 20th, the deportees landed at the airport in Asmara and were taken away by armored vehicles to Sembel Camp, the first African detention camp to hold the underground exiles.

“Returning to Israel was the main concern of the detainees from the day they set foot on African soil,” writes Shulamit Eliash in the second chapter of her book Etzel and Lehi Exiles
British Detention Camps in Africa (1944-1948)
(Hebrew). Although this seems to be an accurate statement – the obsession to return is corroborated by entries in the detainees’ diaries – the detainees placed their focus on another objective which helped to ease the suffering of their forced exile: They poured their efforts into meticulously documenting the details of camp life and the various activities they engaged in during the years of captivity.

The Jewish prisoners began documenting their experiences within the first days of their residence at the Sembel Detention Camp. At the Gilgil Camp in Kenya, the third and last camp to which the detainees were transferred towards the end of their time in Africa, the appointed literary board asked residents to contribute “any text that had anything to do with their stay in the camp,” for a special booklet. All 439 camp residents turned over articles, stories, notes, drawings, memoirs, and diary entries for the cause.

The camp’s literary board, which was named Badad (“Alone” in Hebrew), published several compilations of prisoner works throughout the detention in Africa. The call put forth at Gilgil was in preparation for the fourth such volume. In contrast to the three mini-booklets that preceded it, “There shall be no limit on the number of pages in this special issue, therefore any material worthy of being published will be included.”

What did the daring, young fighters from the underground movements write about? The first text in the booklet deals with the detainees’ unexpected departure from the Land of Israel into exile. “We are in the air,” writes Aryeh Mehulal (penning the entry under his underground name, Avi), “flying. No one knows where. But clearly, beyond the borders of our own country.” As the work progressed, with more and more texts being added as the submissions flooded in from the detainees, it swelled in size until it grew to a thick, typewritten book called The Book of Imprisonment and Exile (Hebrew).

Zvi Hadas documented his first impressions of exile and titled it First Steps. He noted that when the first detainees arrived at Sembel, they sent a delegation to approach the camp authorities: “The detainees will not accept the expulsion and will do their utmost to return to Israel,” the delegation announced. The camp authorities were not impressed by the gesture, “More and more the recognition that our exile is not some brief affair has taken root. As long as our problem is not resolved in Israel, we will be used as a constant whip to threaten the rebellious and the intractable.”

The unusual situation soon became a dull routine. The inaction of the detainees led to the need to implement various cultural and recreational initiatives in the camp, primarily sports and fitness- a central theme in the life of the camp, on which the historian Baruch Forman composed a fascinating article. Boredom was expressed in writing as well. David Sivan summed up the first three months of detention, “A bugle woke us up in the morning. A bugle sent us to bed in the evening. And in between, day after day, we gazed out at the landscape – rich and fertile – and inward toward our souls –barren and desolate. Empty days, terrible days, days of chaos. Thoughts wander through an inventory of memories – yet only the inventory remains. Beyond the fence there is no caller, there is no messenger from the Land. The walls of our cage are transparent and sealed. Days of detached worry, days of dull boredom, and of ignorance.”

On their 56th day in the Sembel Camp, the imprisoned resistance fighters conducted their first hunger strike which lasted for several days. It was at this point that the exhausted detainees received their first letters from home. “Immediately a bell was heard calling the camp residents to the mess hall. It was both funny and painful to see the boys running to the mess hall to receive that which was now dearest to us all.”

Perhaps it is best not to take every word the underground fighters wrote about the extent of their pain and suffering at face value. While their writing tells of the inherent helplessness of their situation and complaints of the tedious boredom and homesickness, the introduction to the reissue of The Book of Imprisonment and Exile (published by the Ministry of Defense, 1980) revealed that the camp was rife with the kind of activity which had led to the exile of the detainees in the first place.

Not only were the contributors to the book not particularly careful to avoid offending the representatives of the British Empire, but sometimes they seem to have been deliberately intent on provocation. Almost all attempts to escape from the three camps in which the detainees were held in Africa (a total of nine) are documented in alarming detail.

Think about it this way: When the book was published in the camp in November 1947, modern Hebrew had already been widely spoken in the streets of the Land of Israel for more than two decades. Would it have been so difficult for the more-than-proficient British army to obtain an interpreter who would easily expose the subversion that is well documented within The Book of Imprisonment and Exile? Did the detainees not see this as akin to disturbing a sleeping dragon?

I found a slight echo of some concern in the forward to the 1980 reissued edition of the book, which was written by two members of the original literary board. “The shortcomings of The Book of Imprisonment and Exile stemmed from the conditions of the camp. There was an inherent need to keep the details of escape and the names of escapees secret. The most significant information gap regards events that took place in the camp between September 1947 and the final announcement of our return to Zion (July 1948). These events were only noted by where they fell on the timeline of our imprisonment in the camps in the appendix at the end of the book.”

The large wooden press that was used for the printing of the book was also secretly used for creating “the seals of the countries in fake Honduran and El Salvadoran passports prepared in the camp. These would be used in the next escape attempt,” the two editors added in a footnote.

The last detainees were released 56 days after the establishment of the State of Israel. They arrived at the port of Tel Aviv in July, 1948. The former detainees were in awe of the changes that had taken place in the young Hebrew state during their four years of exile. With the establishment of the State of Israel, the deportees’ stay in Africa became a violation of international law and, thus, the long-awaited road for their return to Israel was paved.

The struggle to establish a Jewish State in Palestine had already entered its second phase when Arab armies invaded the newly minted state on the day Israel declared her independence. “Who is on the side of the Lord?” was the commander’s call to action before the onset of an Irgun operation, “We have all pledged to this cause for life. The only release from this vow is death” they sang in the Lehi. A dramatic finale to a story of imprisonment and exile. But the real story did not end on the day Israel declared independence or even when they returned to their homeland. The returning exiles would go on to flourish in the new state whose establishment they had heard of from so far away, while crowded around a single radio as prisoners.

Bonus: Two original copies of The Book of Imprisonment and Exile are kept at the National Library of Israel, both of which contain a different, moving dedication. The first is dedicated to the President of the Hebrew University, Dr. Yehuda Leib Magnes. The second, dedicated to the National Library itself (which at that time served as the library of the Hebrew University), reads: “To the Jewish National and University Library, a gift from the camp of exiles in Kenya.”

The 1929 Palestinian Riot Caricatures That Were Banned by the British