The Secret Drafts of the Balfour Declaration

On November 2nd, 1917, a declaration that changed the course of history was published. 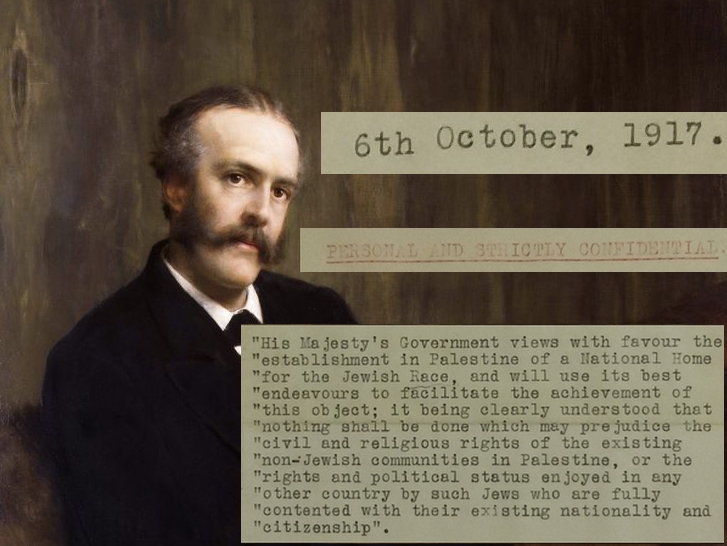 The document that would lay the foundation for the establishment of the state of Israel was  sent in the form of a letter by Lord Arthur James Balfour to Lord Walter Rothschild. Rothschild was to pass it on to the Zionist Organization headed by Dr. Chaim Weizmann.

The unpublished drafts of the Balfour Declaration allow us a rare behind-the-scenes glimpse into one of the most significant episodes in the history of Zionism.

As the Hebrew settlement in the Land of Israel kept establishing and expanding itself, the leaders of the Zionist movement realized they would need political support from one of the world’s great powers, specifically the British Empire.

When the British ousted the centuries old Ottoman presence in Palestine, Chaim Weizmann presented a draft for the founding of a state. This draft was a declaration sent to the then British Foreign Secretary, Lord Arthur James Balfour, on July 1917. The draft declared that Britain would recognize the Land of Israel as the land of the Jewish people.

The declaration did not leave the Foreign Office as it was drafted, of course. In fact, it went through several rewrites. By early October 1917, the draft was processed by the War Office in conjunction with the Zionist Organization delegation.

It was in one of the final drafts of the declaration that the section regarding the Jewish people’s right to the land was omitted and the “Jewish state” became a “National Home” – an unprecedented legal and diplomatic term.

The National Library of Israel holds the draft of the declaration the War Office sent Sir Magnus. The differences in the draft sent to Sir Magnus and the final historic letter were slight, but significant. In the finalized version we see the wording: “His Majesty’s government views with favour the establishment in Palestine of a National Home for the Jewish People”, while the earlier draft speaks of a “National Home for the Jewish Race”.

With this change the British government strengthened the Zionist position of the Jews being a nation among nations, rather than just an ethnic group with their own religion.

Sir Magnus’ reply and draft changes can also be found in the National Library of Israel collections, shedding light on the opinions of non-Zionist British Jews at the time. Sir Magnus refused to distinguish between his opinions as a Jew and as a British subject in a stroke of political brilliance. Sir Magnus made the claim that ever since the Roman exile, the Jewish people had ceased being a political body and shared only a religion and as such did not have a national aspiration in the Land of Israel.

Sir Magnus’ suggested changes, which were later incorporated into the final declaration, had more to do with the people of other faiths and cultures in the region. This is clearly stated in the final draft of the declaration as: “It being clearly understood that nothing shall be done which may prejudice the civil and religious rights of existing non-Jewish communities in Palestine.”

The original letter sent to Lord Rothschild by Lord Balfour is kept in the British Museum to this very day.

The Peacenik Who Flew His Plane into Enemy Territory