In 1867, Mark Twain made a visit to the Land of Israel. What did Twain think of the Holy Land? Join us as we trace his journey. 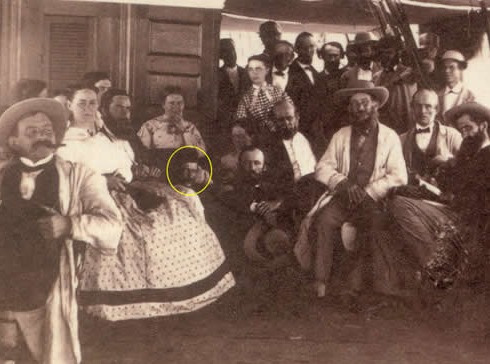 Mark Twain (circled) and the “innocents" aboard the Quaker City

After the invention of the steamboat in the nineteenth century, hundreds of American pilgrims flooded into the Holy Land, in boatload after boatload. In an era when the typical American Protestant was required to master the Bible, many Americans knew the basic geography and the names of the historical sites of the ancient Land of Israel before even arriving in the Holy Land. The first American pilgrims reached Palestine in 1819. With the normalization of diplomatic relations between the United States and the Ottoman Empire in 1832, the final bureaucratic barrier to the already arduous journey was removed.

In 1866, the young author Samuel Clemens, who was just beginning to become known under the pen name Mark Twain, set out to examine the attractions for himself. The rapidly developing religious tourism industry contributed to Twain’s natural tendency toward ridicule and satire. He latched on to a group of pilgrims, whom he deridingly dubbed “the innocents,” and boarded the “Quaker City” en route to the Land of Israel.

Prior to his departure, Twain had signed a contract to write fifty-one short articles during the journey. The letters he penned while in Palestine were combined with articles he wrote later on, the result being “The Innocents Abroad“, a book which detailed his impressions of the strange country he encountered.

A “pleasure excursion” on the deck of a floating “synagogue”

From the moment he arrived on deck, Twain used his sharp pen to lash out in every direction. Referring to the ship’s prayer hall where the pilgrims gathered, he wrote: ‘The unregenerated called this saloon the ‘Synagogue'”. It seems Twain was not impressed with the mood on board either: “…the pleasure trip was a funeral excursion without a corpse” he wrote. His more pious partners soon resented the way he chose to pass the voyage at sea: gambling with the younger passengers, drinking, smoking his pipe and taking the Lord’s name in vain whenever he felt that the ship was being unnecessarily delayed.

What did the famous author think of the Land of Israel?

On September 24, 1867, the author bought an elegant looking Bible for his mother. He asked the shop owner he purchased it from to inscribe the word “Jerusalem” on the cover in Hebrew (probably to impress his anxious mother) before sending it to the United States. But in truth, Twain was not at all impressed by what he witnessed in the Holy Land.

From the long-awaited moment they arrived in the country, Twain hastened to dismiss the religious devotion shown by the rest of the party. According to his reports, his fellow travelers took every opportunity to cry and pray hysterically, but they also never missed an opportunity to remove antiquities from their resting place to take home as souvenirs.  In sharp contrast to his fellow travelers, Twain neither sang nor gushed. Upon crossing into the Holy Land and laying his eyes on the river Dan, he determined that “Its banks, and those of the brook are respectably adorned with blooming oleanders, but the unutterable beauty of the spot will not throw a well-balanced man into convulsions, as the Syrian books of travel would lead one to suppose”.

The residents of the area seemed petty and narrow-eyed, and the exorbitant prices they offered to the pilgrims only reinforced his views. On the banks of the Sea of Galilee, while imagining Jesus giving his teachings to the local fishermen and Josephus commanding his fleet of warships, the pilgrims tried to barter for a ride on one of the locals’ boats. After an unreasonable price of two Napoleons was put forth, the “innocents” countered with an offer of only one. They were then shocked to see the fisherman turn around and sail off, leaving them stranded on the shore: “How the pilgrims abused each other! Each said it was the other’s fault, and each in turn denied it.”

Twain was fed up with the primitiveness of the settlements and roads he encountered: “The further we went the hotter the sun got, and the more rocky and bare, repulsive and dreary the landscape became…There was hardly a tree or a shrub any where. Even the olive and the cactus, those fast friends of a worthless soil, had almost deserted the country”. The statement reflects his general attitude to the ancient land throughout his journey.

One exception to the rule was the city of Jerusalem, which Twain described in glowing terms: “Perched on its eternal hills, white and domed and solid, massed together and hooped with high gray walls, the venerable city gleamed in the sun. So small! Why, it was no larger than an American village of four thousand inhabitants… Tears would have been out of place. The thoughts Jerusalem suggests are full of poetry, sublimity, and more than all, dignity. Such thoughts do not find their appropriate expression in the emotions of the nursery.”

A central motif that weaves through Twain’s writings is the polarization between American progress and the enslavement of the Holy Land to its own past. In his opinion, it was precisely the reverence of the three religions towards the Land of Israel that was responsible for the miserable state he perceived it to be in. In one of the sharpest and most beautiful passages in the book, Twain states that “Palestine is desolate and unlovely. And why should it be otherwise? Can the curse of the Deity beautify a land? Palestine is no more of this work-day world. It is sacred to poetry and tradition – it is dream-land.”