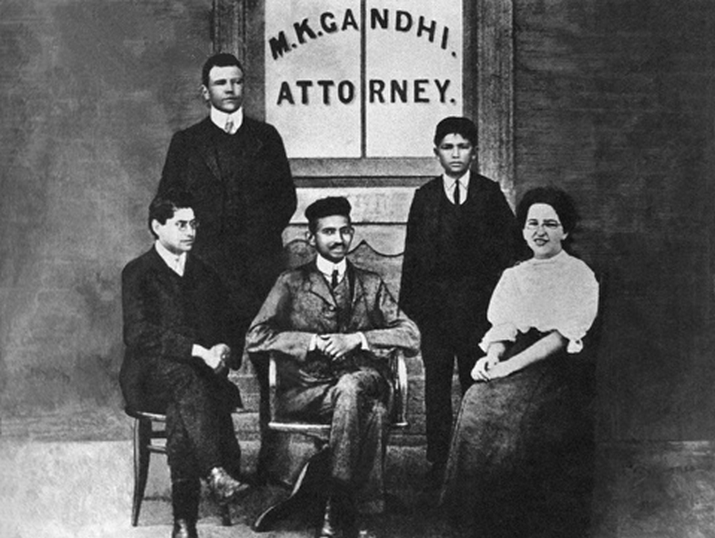 Gandhi (center) with his secretary, Sonia Schlesin, and his colleague Mr. Polak in front of his Law Office, Johannesburg, South Africa, 1905; source: gandhiserve.net

What did Gandhi think about Yiddish? That’s a question probably few have contemplated. Yet the answer casts light on the complex relations between Jews and other groups in pre-World War I South Africa.

Gandhi did think about Yiddish quite often during that period because South African Jews were campaigning vigorously to categorize Yiddish as a European language at the time. Why? They wanted to differentiate Yiddish-speaking Jewish immigrants from Indian and Chinese immigrants.

This campaign arose because in the early 1900s, the white population of South Africa was looking for a bureaucratic way that was not obviously racist to restrict Indian and Chinese immigration. Since Cape Town was at that time the main port of entry for immigrants, in 1902 the Cape Parliament devised and passed Act 47, an immigration law stating that immigrants arriving there had to be able to fill out an application in a European language.

Some in the Jewish community were concerned that Yiddish, although structurally a European language, appeared suspect because it is written in the Hebrew alphabet and is read from right to left, and hence might be classified as non-European. That classification could then be used by those who disliked Jews to restrict Jewish immigration. A campaign was promptly launched to have Yiddish officially designated as a European language, an effort that ended in success: a proviso to Section 26 in the Immigration Act of 1906 stated that “for the purpose of this subsection, Yiddish shall be accepted as a European language.”  As a consequence, Jewish immigrants, most of whom were Yiddish speakers from Lithuania, were exempt from possible exclusion.

Attorney Morris Alexander was one of the major campaigners. He and his wife Ruth Schechter Alexander were both staunch Gandhi supporters; Gandhi even stayed at their Cape Town home on his very last night in South Africa before embarking for India in 1914. Yet Morris Alexander fought with all his lawyer’s skills to get Yiddish specifically included in the bill that stated that immigrants had to write an application in a European language. As a white European, he could support Gandhi in advocating for the rights of Indians but resist any law that classified Jews with Indians and Chinese.

During this period Gandhi was a young British-trained lawyer working to help his many struggling clients, mainly Indian immigrants to South Africa, while often facing discrimination himself. He was gradually developing the theory and practice of massive non-violent protest, satyagraha, which he would take back to India and which would eventually bring him worldwide fame, but all that still lay ahead.

Gandhi was not happy about the campaign to declare Yiddish European. He first called attention to the question in June 1903 in his weekly newspaper Indian Opinion in a short piece interestingly entitled ‘Is Yiddish an Eastern Language?’ His comments in June 1906 on the Jewish success in designating Yiddish a European language were bittersweet: “We are very glad that the Jewish community should have been freed from a galling restriction. But…by its non-recognition of the great Indian languages…the Cape has ruled out subjects…who had, by the Queen’s Proclamation, been promised equal liberties with their white fellow subjects.” Gandhi was pointing out that both India and South Africa were part of the worldwide British Empire and hoping—in vain, as it turned out—that promised liberties would extend to Indian subjects who had immigrated to another part of the Empire. Nine issues of Indian Opinion in 1906-07 mention the maneuvering about Yiddish in some way, indicating his ongoing concern with the issue.

In June 1909, still musing about these matters, Gandhi invoked his ace in the hole: the Sassoons. They were a very large and wealthy Jewish family, originally from Baghdad, who had risen to prominence in India, China, and even England. About Sir Edward Sassoon, who at that time sat in the House of Commons, he wrote in Indian Opinion “…his grandparents lived in Bagdad and Bombay, wore Asiatic costumes, and were never regarded in any other light than as Asiatics”. Yiddish might indeed be linguistically a European language, but Gandhi knew, not from reading it in a book but from his life, that not all Jews were white Europeans. Indeed, he knew about the Sassoons long before he met the Litvaks of South Africa.

Gandhi thought of the Jews as bridging East and West. From his writings one can gather that he felt some combination of disappointment,  exasperation, and resentment that the Jewish communal leaders of that era, rather than join with the Indians and Chinese to oppose what was obviously discriminatory legislation, instead worked vigorously to exempt Jewish immigrants from it.

By contrast, individual Jews were among Gandhi’s closest friends and most devoted supporters. These Jewish allies included the lawyer Henry Polak, the architect Hermann Kallenbach, and Gandhi’s gifted young administrative assistant Sonja Schlesin. These important relationships helped to counteract the distancing he experienced from the Jewish establishment.

This article was adapted from the article “With Gandhi in South Africa: Sonja Schlesin”, by Harriet Feinberg, which appeared in the Passover 2017 issue of Jewish Affairs.