The Jewish Child Soldiers Who Rebuilt Their Lives in Riga

An elaborately decorated Pinkas now kept at the Central Archives for the History of the Jewish People tells the story of the Talmud Torah of Riga which sought to return former child soldiers - and their children - to their Jewish roots. 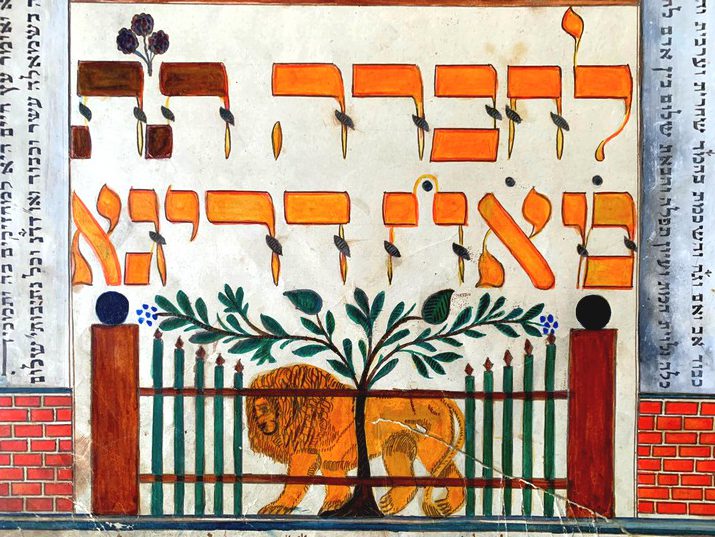 In 1827, the Imperial Russian Army began drafting Jewish citizens into its ranks. When Nicholas I set up the draft laws for the Jewish community, they had some significant differences than the laws applied to the rest of his subjects. The new draft laws forced Jews to contribute more cantonists (children taken into special state schools to be trained for military service) than the general population, creating a disproportionate number of Jewish conscripts. Instead of applying the age requirements already in place for recruitment that called for the draft of 18 year-olds, the law for Jews allowed for children aged 12 to 25 to be drafted into the military. The leaders of the Jewish community were tasked with choosing who would be sent to fulfill the conscription quotas. They were also charged with maintaining the financial and social stability of the community. This meant that the community leadership would select those people who were deemed to be the least useful to the community at large for the draft. This included the unskilled, the unmarried, the poor and the young. Those who would not or could not actively contribute to society on a significant level were included on conscription lists. There were also those leaders who chose to send the less fortunate – meaning, those could not afford to bribe their way out – for the draft rather than include their own children on the lists. As soon as a child was drafted into a cantonist school, their family and community had no choice but to consider him dead, for all practical purposes. Cut off from their homes and loved ones, these youngsters were taken into custody of the state where they were encouraged to forget their religious upbringing, abandon their traditions and convert to Christianity, revealing the not so secret goal of the Czar to utilize the conscription laws as a way to encourage assimilation amongst the most vulnerable parts of the Jewish community. After completing 25 years of mandated service, many cantonists signed on for additional service and became career military men, while those who chose to take their leave were granted full citizenship rights including the freedom of movement – a freedom that was usually only granted to Jews under special circumstances.

For these soldiers, freedom came with more problems than solutions. With families they didn’t know and no home to return to, the cantonists were left with little choice but to build a new life from scratch in a territory that was now open to them thanks to their newly earned freedom of movement.

A visit to the Central Archives for the History of the Jewish People to speak with Dr. Yochai Ben-Ghedalia gave me new insight into the difficulties faced by these Jewish children turned soldiers who managed to make it out of their service alive and maintain their connection to their roots.

A Pinkas (Jewish community ledger) now preserved in the CAHJP tells the story of one such group of soldiers who, in 1865, settled in Riga and joined the local Jewish community. The unique and ornately decorated Pinkas was brought to Israel in the 1970s through Lishkat Hakesher – Nativ, an organization that helped connect people in the Soviet Union with Zionism and the State of Israel and assisted people who sought to immigrate to Israel.

The cantonists who arrived in Riga, which was still part of the Russian Empire at the time, found that they had a united goal: to rediscover and recommit to their Jewish heritage. These soldiers were a rare breed- not only had they made it out of the military alive, but they had also successfully maintained their religious connection and their desire to rediscover their Jewish roots. The soldiers established the Talmud Torah of Riga, an educational institute focused on Jewish study.

The Pinkas opens with a beautifully written introduction reflecting the tenets of the institution, the importance of Torah study in the lives of the Jewish people and the responsibility that falls on Jews as a nation to ensure all Jewish children are educated in the ways of the Torah with a special emphasis on those who lack a proper teacher. The Pinkas includes a letter from a local rabbi giving his full support to the Talmud Torah and their important and worthy works and then goes on to list 23 points of action in regards to the practical operations and the rules of the organization.

The Talmud Torah took upon itself to hire two teachers who were provided with room and board and were charged with educating participants. Students were divided into two different classes: one dedicated to those who were just starting on their Torah journey and would begin study with the Alef-Bet, the Hebrew alphabet, and one for those who were more advanced and could move forward to bible study and the study of Jewish law.

Membership in the Talmud Torah was approved for any “army orphan,” which essentially referred to any boy born to a cantonist father who was killed during his service. The Talmud Torah also accepted children whose fathers could not care for them or provide them with a proper Jewish education. Admission into the institution was determined by three Gabaim, the people in charge of the day to day logistics of managing the organization.

Years went by and the Talmud Torah continued to serve as an institute of learning but also grew to become a full-fledged synagogue with a surrounding community. The Pinkas begins to discuss the purchase of a plot of land on which to build a new home for the synagogue. As it grew, the Talmud Torah joined forces with other organizations that provided poor children with food and clothing. 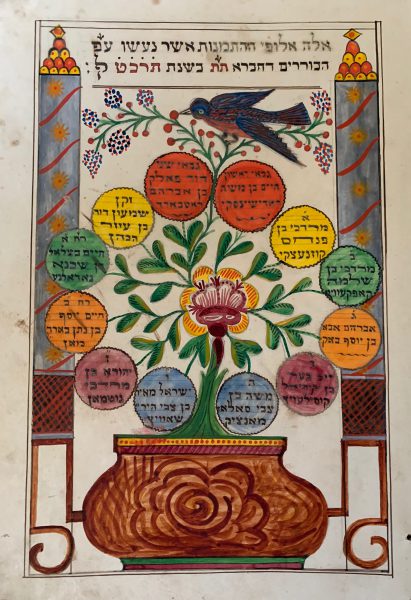 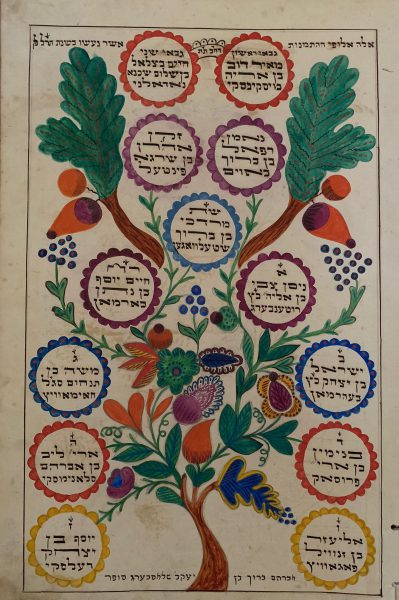 The Hanhala (administration) of the Talmud Torah was changed every few years through an election process described in the Pinkas. For every new administration that took charge, a new elaborately decorated page was added to the book to honor the incoming leadership. Interestingly, many of the pages contain similar elements though they were not necessarily created by the same artist. Several of the pages include large, fierce-looking birds, a symbol of the Russian Empire, reflecting the original purpose and members of the Talmud Torah. 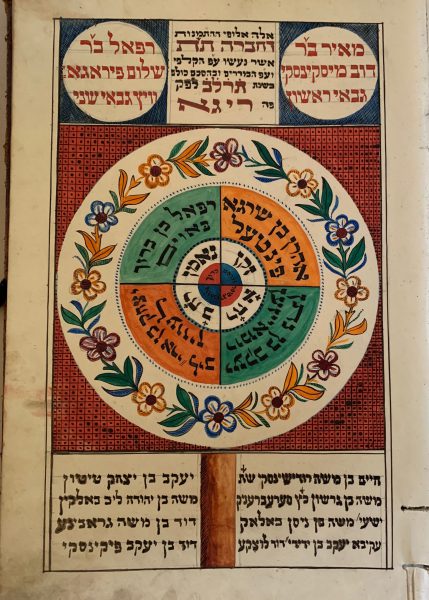 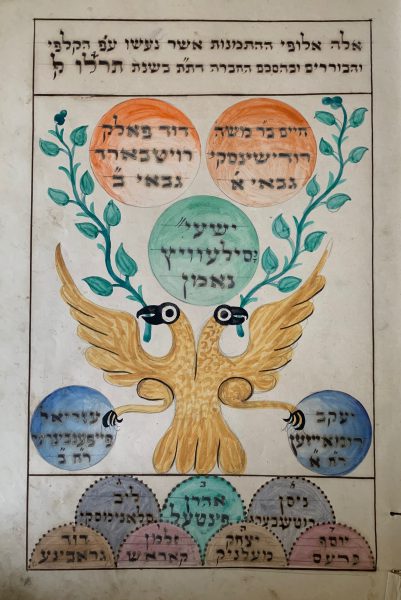 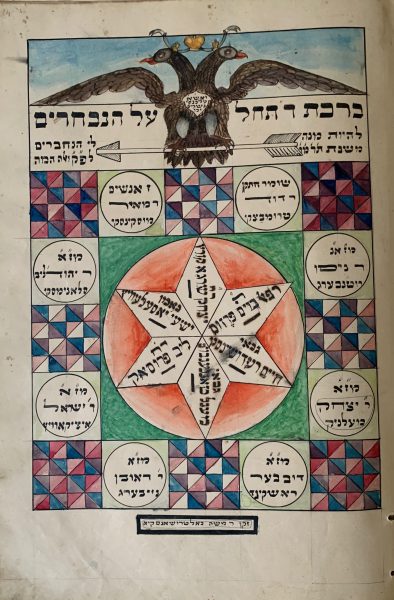 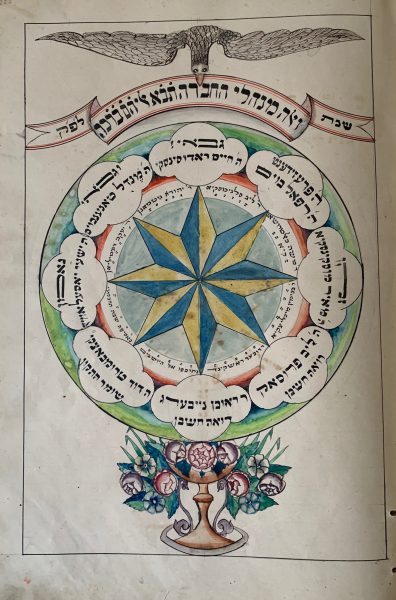 In 1937, a page was prepared and designed in dedication to the latest administration but it was never completed. The records in the Pinkas drop off suddenly during the years of the Nazi occupation. While we do not know the specific story of what happened to the participants of the Talmud Torah during the Holocaust, we do know that the majority of the Jewish community in Latvia was murdered in the war. The Pinkas managed to survive the war and a new page was later added in 1959.

When I think back to that five-year-old boy who was taken from his family for a life in a military school before joining the ranks, I can only hope that his future held a community and an adoptive family like the one built by the soldiers who settled in Riga. Their dedication to their heritage and their desire to continue to grow and experience life as Jews, despite the efforts of the authorities to strip them of their families, religion, and identities, is astounding. While the Talmud Torah of Riga may no longer be active, the history of the organization and the strength and dedication of those who worked to build it lives on in the archives of the National Library of Israel.

Special thanks to Dr. Yochai Ben-Ghedalia and Dr. Gil Weissblei for their assistance in writing this article.