Letters from Edith Gerson-Kiwi, the Grande Dame of Israeli musicology, reveal particular and universal truths about the 'age-old capital of the world' 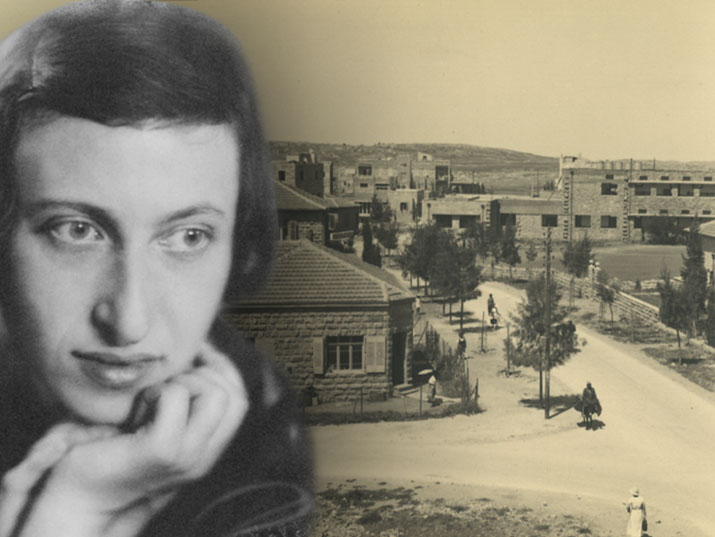 Edith Gerson-Kiwi and the Jerusalem "garden suburb" of Rehavia, where she lived (Images: Gerson-Kiwi in 1933, from the Edith Gerson-Kiwi Estate at the European Center for Jewish Music / Photo of Rehavia in 1937 taken by Shmuel Joseph Schweig, from the Pritzker Family National Photography Collection at the National Library of Israel)

It is December 5, 1935, when a young woman from Berlin arrives in Mandatory Palestine.

Equipped with an alert mind, a fair amount of ambition and astonishing energy, she has decided to turn her back on her homeland and build a new life in the ‘Land of the Fathers’. It seems she takes great pleasure in what she finds: in a letter written shortly after her arrival to her friend Eva, who was then exiled in Amsterdam, the young woman effusively describes the purifying and uplifting effect the country has upon her, drawing on the arsenal of Zionist metaphors and images:

“There are also wonderful people here, the country embraces and nurtures them; for many of them it was a complete rebirth, I myself have gone through it in a very intense way. And then: all these young people, suntanned and strong, and a rhythm of work, freedom and hope that is inspiring and quite intoxicating.”

The author of the letter is the German-Jewish musicologist Edith Gerson-Kiwi, remembered today as a pioneer of Israeli musicology; one who made lasting contributions to the field, and connected Israel to the wider world.

It was written on September 29, 1936, and is just one of over 6,000 letters being catalogued as part of a research project at the European Center for Jewish Music (ECJM) in Hanover, Germany. They are part of the extensive Gerson-Kiwi Estate, the bulk of which is housed by the ECJM. A smaller number of documents can be found in Israel, including the Edith Gerson-Kiwi Archive at the National Library of in Jerusalem.

It is the earliest known letter written by the young woman after her arrival in Palestine, and reflects that fateful turning point in her story: referring to the life she left behind, while at the same time mapping out the horizons of her future.

From Berlin to Jerusalem

Edith Gerson-Kiwi was born in Berlin in 1908 into an assimilated Jewish family and enjoyed a typical bourgeois upbringing. As a young girl, she attended a humanist Gymnasium (selective high school), and her evident musical talent was nurtured by piano and composition studies at the Sternʼsche Konservatorium, a renowned music academy. After gaining her university entrance qualification, she reads musicology, minoring in philosophy and literary history, at the universities of Freiburg, Heidelberg and Leipzig.

One searches in vain for a Zionist socialization in this biography. The ‘push factor’ driving this young woman to the Orient is not the idealistic longing for the ‘new Jew’, but rather the increasing anti-Semitic pressure in Germany. The first thing to fall victim to this is her relationship with her non-Jewish fiancé and fellow student Fritz Dietrich (1905–1945): while her parents, after initial hesitation, agree to the match, his parents do not accept her because of her Jewish identity.

The year 1933 finally brings the decisive turning point: while defending her dissertation in Heidelberg on January 30, the day of the transfer of power to Hitler, she hears soldiers and students clashing in the street.

The young musicologist no longer sees a future in Germany.

She goes to Bologna to study paleography and library science. Meanwhile, Fritz Dietrich gains clarity about his future aspirations, deciding in favor of an academic career in Germany and thus against a relationship with a Jewish woman.

A single encounter is all that is needed to prompt Gerson-Kiwi to take a big step: she meets a group of young Zionists from Palestine in the university cafeteria in Bologna and makes a spur-of-the-moment decision to immigrate there.

Many, if not most, Jewish immigrants from Germany who relocated to the Land of Israel after 1933 did not feel at home or even uplifted upon arrival, given that they came as refugees rather than idealists.

While the Land of Israel represented a place of yearning and a Jewish home for the Eastern European Jews, for assimilated German Jews it was an exile.

Yet, Edith Gerson-Kiwi’s encounter with her old-new homeland is thoroughly positive, all the more so since “everything in my personal life suddenly became good once more”: newly arrived in the country, she meets Kurt Gerson, an engineer and architect from Hamburg.

Four months later, they get married.

“A Prussian island in an Oriental sea”

“We live in a new garden suburb of Jerusalem that is populated by many German immigrants. […] We have a charming attic apartment on top of a brand-new complex of houses – and a large terrace as well, from where there is an extensive view over the hill country of Judea with its fantastic colors [and] scenery.”

The garden city is Rehavia, Jerusalem’s noble villa district, designed on the model of Berlin’s Grunewald, to which chroniclers such as S.Y. Agnon and Amos Oz have created a literary monument. Built in the 1920s according to plans by German-Jewish architect Richard Kauffmann, this oasis, which was then on the outskirts of the city (though long since swallowed up by the city center), soon became the preferred place of residence for educated people and intellectuals of the German cultural world: professors and staff of the still-young Hebrew University, writers and journalists, doctors, pharmacists and lawyers, cultural workers and civil servants.

Quite a few of them had made their way from Berlin to Jerusalem, where this “Prussian island in the Oriental sea” became their home. Here they cultivated the German way of life and culture to which they were so strongly connected, yet which now had come to an end in Germany itself.

New paths to a new future

Many Germans succumbed to the feeling of foreignness. Unable to heed the demand for integration, they retreat into their inner circles. Gerson-Kiwi, by contrast, opens herself up to the wealth of new impressions, is inspired by the Zionist spirit of optimism and enchanted by the “completely different atmosphere” of Jerusalem: this “age-old capital of the world” with its “Jews from all over the world, Persian, Bukharic, Yemeni, Moroccan, Samaritans, and others, representatives of all peoples, races, and religions”.

After years of professional and personal hardship and disappointment, she discovers in the Land of Israel new forms and ways of being Jewish.

Shortly after her arrival in Palestine, she meets Robert Lachmann (1892–1939), who also arrived in 1935, and joins him as his assistant. Lachmann, of the Berlin School of Comparative Musicology, has been tasked with the establishment of a phonogram archive for Oriental music in Jerusalem, and introduces Gerson-Kiwi to Middle Eastern musical cultures.

At the same time, she rediscovers Judaism: the writings of Gershom Scholem bring her, an assimilated Jewish woman of Berlin’s educated bourgeoisie (Bildungsbürgertum), closer to a Judaism in its deeper, mystical form that transcends enlightened, rational thinking, “in a time when I was rather in controversy with the principles of our Jewish religion” (letter to Chanah Milner, June 20, 1972).

She finds and appreciates this mystical form of faith and thought adopted by her new neighbors, the Oriental Jews.

Tirelessly, she devotes herself to documenting, researching and popularizing their “melodic treasure trove” that is in danger of being lost in the modern melting pot that is the Land of Israel. In addition, other musical cultures of the Middle East attract her interest – those of Arabs, Druze, and Oriental Christians. She will make around 10,000 sound recordings during her lifetime, documenting the Land’s polyphonic soundscape.

Rehavia is also characterized by a climate of tolerance towards the Arab population of Palestine, resulting from the German-Jewish immigrants’ own minority experience and the values of liberalism and universalism that Central European Jewry acquired with the emancipation. It is no coincidence that “Brit Shalom” was founded in Rehavia: a short-lived peace alliance (1925–1933), which adopted a moderate position in the Jewish-Arab conflict, respected the Arabs and their territorial claims, and advocated a binational state solution.

Edith Gerson-Kiwi shows solidarity with the Arabs throughout her life. As an “old pioneering champion of Jewish-Arab friendship, of peace, and, above all, of intellectual awakening” (letter to Hellmut Federhofer, June 29, 1973), she not only maintains memberships in institutions striving for dialogue and understanding, but also supports Arab musicians and music researchers, committing herself to the dissemination of Arab music through research and teaching.

And yet, from the very beginning, there was also a downside and a complexity to this new life in the Land of Israel and among its different communities. This complexity is revealed quite starkly as Gerson-Kiwi’s description of the advantages of her living situation in Rehavia transition into acknowledgement of a bitter reality:

“We live here in a quiet and secluded environment; that’s ideal for us, and it’s also a consequence of the unrest. It’s precisely here in and around Jerusalem that the contrasts are particularly stark, because everyone lives cheek by jowl. Almost every night there are gunshots in our area; during the day there are only a few streets in the Jewish ‘center’ where you can move freely, and for more than five months now a curfew has kept everyone at home from 6.30 in the evening. Overall, this is a severe shock and the first big challenge to be faced. But we all believe that we will meet this challenge, because we know what we are fighting for and how much blood has already been shed in this cause.”

The mass influx of Jews, especially after 1933, had triggered the Arab Revolt (April 1936–1939), with insurgents demanding that the British Mandate government stop Jewish immigration, prohibit the transfer of Arab land to the Jews, and establish a national government.

The Palestinian Arabs initially react with a general strike affecting trade and commerce. A series of acts of violence against the British and Jews followed, until the mandate government finally put down the revolt with military force.

Over the decades, numerous letters written by Gerson-Kiwi tell of how attacks and wars overshadow and restrict her life and work. “It is indeed a bad fate of ours, always to be after or before a war”, she lamented in a 1970 letter to Grace Spofford, a colleague in New York.

Not all the hopes of the early years were fulfilled.

The visions of a better social order and peaceful coexistence with the Arab neighbors turned out to be illusions. Political tensions, economic shortages and inner-Jewish conflicts, Arab uprisings and wars dominated everyday life.

While the 1956/57 Suez Crisis and the 1967 Six-Day War may have brought new, fascinating and promising worlds to light for musical orientalists like Gerson-Kiwi, later catastrophes such as the Yom Kippur War (1973), the Lebanon War (1982) and finally the Intifada (from 1987 onwards) created only horror, helplessness and resignation.

In a 1989 letter to an unknown correspondent, she wrote:

“We still live here in western Rehavia in our peaceful surroundings, but the gates of hell have suddenly been opened, and the killing is taking on new and ever worse forms every day. […] No peace treaty will restore things to how they were…”

In addition, she increasingly realized that her life’s work – the collecting, preserving and spreading of the endangered Jewish Oriental traditions – had become a thing of the past, that it could not withstand the dawning future. “A radical fault line has formed between the generations,” she lamented in a 1976 letter.

Edith Gerson-Kiwi died in Jerusalem in 1992. Fifty years after her immigration, her episteme – born of the never-ending tension between exile and Europe –  already belonged to a bygone age, yet many of the themes and sentiments described in her earliest letter endure until this day.