Rare Pictures: When the Haganah Trained on the Beaches of Tel Aviv

The Haganah's Camp Yona was located in northern Tel Aviv, on a site occupied by a luxurious hotel today; this was the location for a string of historic events, from the murder of Arlosoroff, to the shelling of the Altalena 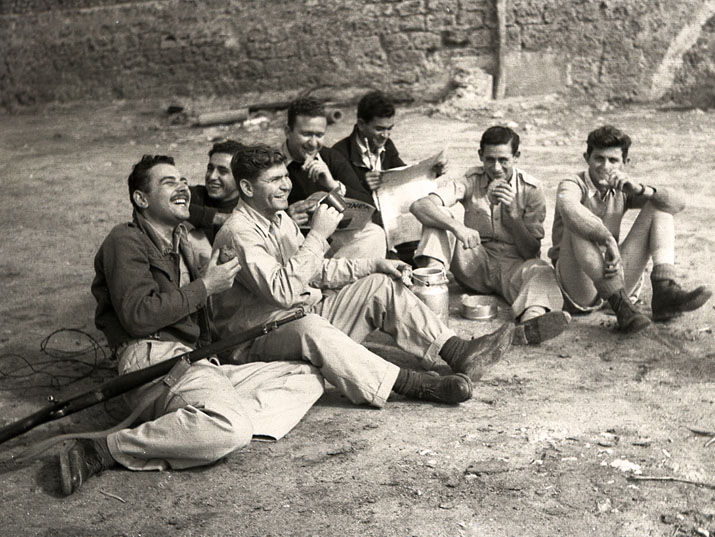 In the archives of Benno Rothenberg, one of the most prominent photographers active during the early years of the State of Israel, is a series of pictures showing members of the Haganah military organization training at Camp Yona. The photo archive was recently scanned and is now preserved at the National Library of Israel, courtesy of the Meitar Collection. These photos of the men and women of the Haganah running, jumping, crawling, undergoing briefings or simply posing – together and individually – can today be viewed on the National Library website. The training drills took place in the “Old North” area of Tel Aviv, close to where the Hilton Hotel and Independence Park (Gan Ha’atzmaut) stand today. I became curious about the story of this camp, which not only hosted the Haganah training sessions, but also witnessed several notable affairs in Zionist history.

It wasn’t always the Haganah doing its training at Camp Yona. The camp came under the organization’s control in late 1947, when the British army withdrew from the area in December of that year. The Haganah quickly seized the vacated former British bases in Tel Aviv, which of course included the Sarona compound (which serves as the IDF’s central headquarters today – the “Kirya” base), as well as Camp Yona. Three days after the withdrawal, Yona Rasin, a Haganah commander, was killed on his way to Jerusalem. His comrades promptly named the vacated military base after him.

What happened before all that? In the early 20th century, the area served as a Muslim cemetery. The people of Jaffa, located further south on the coast, were suffering from a cholera epidemic and had to bury their dead far from the city (for the same reason, the Jewish cemetery on Trumpeldor Street was established at that time). In 1942, during World War II, the British set up a resort on the cliff for Royal Air Force pilots. Why here of all places? For the same reasons people wish to visit Tel Aviv today. The camp was located near the beach, in a town full of cafes, cultural events, festivities and of course – alcohol. British soldiers from all over the Middle East came to the stay at the resort for rest and recreation.

At the foot of the camp positioned on a kurkar cliff, lay the strip of sand known today as the Hilton Beach, named for the hotel which looms overhead. It was here that Sima and Haim Arlosoroff took a stroll along the water on the Friday night of June 16th, 1933, after leaving a café just to the south, where the Dan Hotel can be seen today. There, they spotted two strangers who had been following them for some time, when one of them pulled out a gun and shot Arlosoroff, then the head of the Jewish Agency’s political department, something akin to the Zionist movement’s foreign minister. The murder shook the Jewish community of Mandatory Palestine and fingers were pointed at members of the Revisionist movement.

Let’s fast forward a few years – 15 years, to be exact – to June, 1948. Off the coast of Tel Aviv, the ship known as Altalena ran aground after fleeing from Kfar Vitkin beach further north, where the confrontation with IDF forces had begun. In the ship’s hull was a load of weapons ordered by the Irgun for its soldiers. The IDF was ordered to stop the ship, using artillery fire. Where were the cannons that shelled the ship deployed? That’s right, at Camp Yona on the kurkar ridge. Another anecdote is that Abraham Stavsky, one of the Betar youth movement members accused of murdering Arlosoroff, was killed on the Altalena during the conflict.

By sheer coincidence, two key events in the bitter struggle between the Jewish community’s left-wing and right-wing camps occurred near the Haganah base which no longer exists. What else transpired at the historic location? New Haganah battalions were established at Camp Yona and it was here that numerous new recruits were first indoctrinated into the Haganah when the War of Independence broke out. Camp Yona was also used by the IDF’s medical corps in its early days. In addition, the Israeli army’s physical training and combat fitness training facilities, as well as the Physical Education School, were located at the camp until they were moved to the Wingate Institute in the 1950s.

During that decade and the next, a bitter dispute ensued between the Israeli government and the Tel Aviv municipality, which sought to evacuate the camp and build a large public park in its place. Ahead of Israel’s first Independence Day, half of Camp Yona was cleared away and in April 1949 the construction of Independence Park began. It was not until the early 1960s that the IDF cleared the entire area and the park was finally completed. The Hilton hotel was built on part of the land, where it stands to this day.

The photos in this article and other photos of the men and women of the Haganah at Camp Yona can be found here. If you recognize yourself or your relatives in these photos, please let us know in the comments below, or on Facebook or Twitter.

Many thanks to Peleg Levy and Modi Snir of the Toldot Yisrael project, for providing information that assisted in the writing of this article. Thank you as well to Dr. Nir Mann for his research.