The trial of Adolf Eichmann had a profound effect on Holocaust discourse in the young State of Israel. During the trial, a heated debate raged within Israeli society over the appropriate punishment for the senior SS officer… 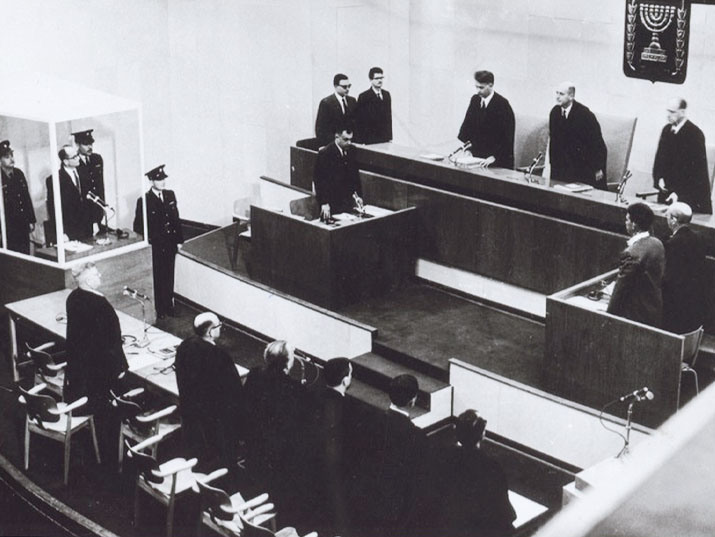 What is the punishment for absolute evil? What is the proper response to war crimes? Is it necessary to avenge inconceivable murders or does criminal punishment serve a different purpose? These are some of the enduring questions of jurisprudence, but exactly 60 years ago, they were being debated in Israel. The country’s political leaders and public intellectuals, along with leading figures from across the Jewish world, were all preoccupied with one question: what is the appropriate punishment for the Nazi war criminal Adolf Eichmann, one of the key figures in the effort to exterminate the Jews of Europe.

A concise summary of previous events: In May 1960, the Mossad abducted Eichmann from his home in Buenos Aires and brought him to Israel to stand trial. The trial, which began in April 1961, was a milestone in the history of Holocaust remembrance and consciousness in Israel, and it is considered to have significantly influenced the treatment of Holocaust survivors living in the country. Prosecutor Gideon Hausner’s opening speech, the dramatic testimonies of personalities like writer Yehiel De-Nur (Ka-Tzetnik) and Zivia Lubetkin, the documents and public discourse the trial evoked, left lasting impressions. The videotaped trial was covered by many international journalists, among them Hannah Arendt, as well as Israeli poets Nathan Alterman and Haim Gouri.

At the end of the year, the trial concluded with Eichmann being sentenced to death. His appeal was denied, as was his request for a presidential pardon. The execution was finally carried out at two minutes before midnight on May 31st, 1962. Throughout this period between the sentencing and the execution, a heated public debate raged on the morality of the punishment. While there was widespread support for the death penalty for the senior SS figure, there were also many prominent figures who opposed it. An examination of materials preserved in the National Library of Israel’s Archives Department as well as the Historical Jewish Press collection offers us a view of these dissenting opinions.

Eichmann’s case attracted worldwide attention, and Jews living in the Diaspora expressed their views on the issue. A review of the newspapers reveals that world Jewry—and world citizenry in general—also saw fit to make their voices heard, and some certainly opposed the death penalty, even for a man who had committed crimes of the magnitude of Eichmann’s. A letter from New York, preserved in the archive of Samuel Hugo Bergmann, then director of the National Library of Israel, is one example of several expressions of protest from around the world. The sender addressed the letter to “all true Jews in the United States, Britain, the State of Israel, and people of good will everywhere.” On a blue sheet of paper, at the bottom of which is typed three times, the commandment “Thou shalt not kill,” the writer claims that the death penalty is an act of vengeance and does not accord with Judaism. He concludes by asking his readers to work to change the decision.

One of the most famous examples of world Jewry’s resistance is that of Nelly Sachs, who was herself a Holocaust survivor, and later a Nobel Prize-winning author (1966). Sachs sent then Prime Minister David Ben-Gurion a letter in which she asked for the death sentence to be changed to another punishment. She writes in the letter, which is preserved in the State Archives, “Israel is blessed with the words of Abraham: ‘Perhaps ten righteous people will be found there [in Sodom]?’ And I myself know such righteous people, who risked their lives and often even paid the price just to save [others]. These righteous people also worked in the time of Hitler, and the undersigned is one of their survivors. Please do not allow a death sentence for Eichmann. The righteous also worked in Germany, and if only for them there should be a measure of grace.” She ended her letter with a poem she wrote, which begins with the words:

So lonely is Man


where melancholy shows in dawn’s face.

The east turns red with the rooster’s cry

At the same time, the most pronounced opposition to Eichmann’s death penalty came from a group of intellectuals in Israel. Among the prominent members were the philosopher Prof. Martin Buber, the scholar of Kabbalah Gershom Scholem, and members of the Department of Philosophy at the Hebrew University, Samuel Hugo Bergmann mentioned above, and Nathan Rotenstreich, among others. Even the poet Leah Goldberg was among those involved. Their opposition stemmed mainly from moral grounds and a fundamental opposition to the death penalty. They did not seek to protect Eichmann or diminish the severity of his actions. They sought, they said, to prevent the Jewish people from committing what appeared to them to be a moral injustice. Beyond that, some feared that the execution would provide a basis for the assertion that this would atone for the Nazis’ sins and silence claims of the Jewish people against its murderers and executioners.

During the hearing of Eichmann’s appeal in 1962, this group urged the president to commute his sentence to life imprisonment. In Martin Buber’s archives in the National Library, we found a draft of a letter—without the names of the signatories. “We do not ask for his soul,” it says, “because we know that there is no man who deserves less mercy than he. . . . We do not want this hateful person to turn us into the hangman. . . Antisemites around the world wish for us to fall into this trap. For carrying out the death penalty will enable them to claim that the Jewish people have been paid with blood for the blood that was shed [by the Nazis].”

When word spread about the petition’s existence, some supporters of the death sentence protested and others wanted to know why the professors were asking to spare Eichmann’s life. In the archives of Samuel Hugo Bergmann, we also found a letter written by three female students (apparently), as well as the draft of Bergmann’s reply. The students wrote to the professor in July 1961 asking for clarification, “We heard a rumor about a petition regarding the pardon of Adolf Eichmann of which you are among the initiators and signatories . . . We would be grateful if you would also explain to us the reasons that motivated you to take such a step.”

Bergmann explained in his reply that he was opposed to the death penalty in principle, and in particular to the idea that those responsible for the sentencing need not be involved in the execution. He stressed that in his opinion only He who gives life may take it. Bergmann also detailed other issues in his letter: he believed that even though there was no statute of limitations on genocide, the many years that had passed since the acts necessitated further consideration. He argued that the death penalty was a lighter punishment than life imprisonment in Israel (adding that there was no adequate punishment for Eichmann’s actions). Bergmann’s first concern, he stated, was for the soul of the Jewish people, and he explained his thinking that Israel must spread love throughout the world, whereas hanging Eichmann would only serve to perpetuate the cycle of hatred.

Another intellectual who dealt with the subject was the scholar of Kabbalah Gershom Scholem. In his archive, we found a draft of an article published in the journal Amot around 1962, which dealt with the issue of execution. According to the draft, Scholem believed that there was no effective punishment for Eichmann’s actions under any circumstances, and that his hanging might seem an unsuitable “atonement.” Scholem wrote: “There is no question whatsoever that Eichmann deserves the death penalty. I have no doubt about it, I do not seek his acquittal, nor do I discuss the arguments concerning his actions and his responsibility for them. All this belongs to the legal aspects of this trial. My assumption is that in this respect nothing can be argued in his defense, he deserves to die a thousand deaths a day and is unworthy of mercy . . . there is no appropriate punishment in the laws of humane society for Eichmann’s crimes . . . whether he is to be hanged or not, there is no conceivable correlation between his crime and his punishment. Furthermore, there is nothing in his execution that can serve for “the sake of watch and learn”, [as an example] to the antisemites and others who seek to destroy our people . . . carrying out Eichmann’s death sentence is a mistaken ending [emphasis in the original – A.N.]. It distorts the historical meaning of the trial by creating the illusion as if something of this event can be settled by hanging a man or the obliteration of one person. This illusion is extremely dangerous, because it may give rise to the feeling that something has been done to ‘atone’ for something for which there is no atonement.”

As we know, the arguments against Eichmann’s hanging were not accepted. President Yitzhak Ben Zvi rejected the request for clemency. Eichmann’s sentence was not commuted and the execution was carried out. Eichmann’s ashes were scattered in the Mediterranean Sea. This year marks exactly 60 years since the beginning of the trial that drastically changed public perception and discourse concerning the Holocaust in Israel.