He swam to Haifa in 1940, unknowingly escaping the ill-fated "Patria", then spent most of the 1948 war as a POW, saved from death more than once by his Arab Legion captors 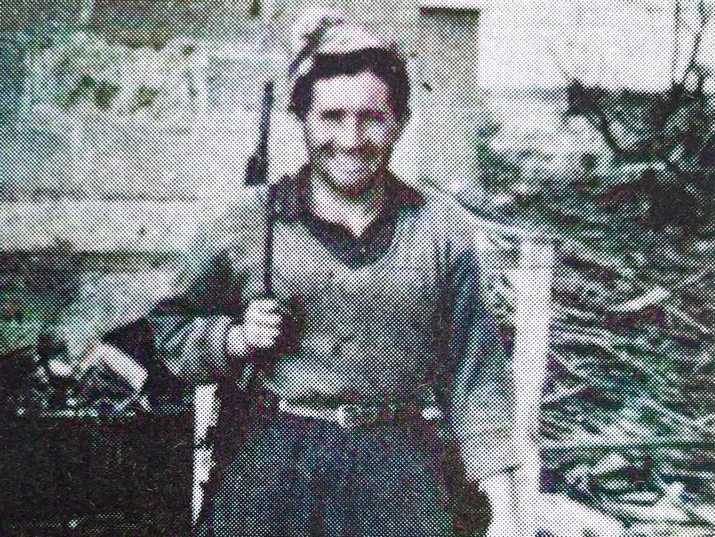 David Ben David during the 1948 siege of Kfar Etzion, where many of his comrades were killed by enemy forces. From his autobiography, Gesher al Tehumot (Bridge over the Abysses), in the National Library of Israel collection

David Ben David first crawled into the Land of Israel from the sea.

He was half-naked, soaking wet, exhausted and alone. His first night was spent in a cement mixer.

With restrictions on Jewish immigration to Mandatory Palestine, the British had transferred hundreds of European refugees – including Ben David – onto a ship known as the Patria, which would take them to the island of Mauritius off the coast of Africa.

On November 25, 1940, the Patria sunk in the Port of Haifa – the result of a failed Haganah attempt to disable the ship in order to prevent the deportation of its passengers, nearly 300 of whom perished.

Days before, unaware of the tragedy to come, 20 year-old David Ben David – never a great swimmer – had leapt from the ill-fated ship.

Just as his strength was about to give out, a wave came and lapped him ashore. As the sun rose the next day and he exited the cement mixer, Ben David found himself among the port workers and heavy equipment. He hid inside a tub, where someone threw him a sweater and a hat.

Ben David’s presence raised the suspicion of a local policeman. With no papers to show and no use trying to flee, he was taken to jail, where a Jewish police sergeant instructed him to pretend to be crazy, which he did well enough to be released with just a warning.

It was Friday afternoon, erev Shabbat. The sun was leaning to the west.

“For me, it was the happiest moment of my life. I was a free man in the Land of Israel. My greatest dream had come true,” he later recalled in his autobiography, Gesher al Tehumot (Bridge over the Abysses).

Ben David – who had been raised Hasidic before joining the religious Zionist movement – had not been at a proper Shabbat table for a year due to historical circumstance.

Still barefoot, he found the sister of an acquaintance from the Patria who gave him some food, drink, socks and shoes and then he went on his way to the local chapter of the Bnei Akiva youth group in which he had been active in his native Czechoslovakia.

“My first Shabbat in the Land of Israel, in the Hebrew Haifa, will never be forgotten. In the park, children played with their parents, two- and three-year-old children who spoke Hebrew… It seemed as if the entire world was joyful like I was…”

Some seven years later, David Ben David was readying for a very different type of Shabbat.

The Etzion Bloc was falling.

Hundreds had been massacred in Kfar Etzion, where Ben David was known as the kibbutz’s mukhtar (village chief).

He was injured and soon found himself in nearby Masu’ot Yitzhak, the last settlement not yet captured by Arab troops.

Ben David and his comrades prepared for the worst, knowing that Masu’ot Yitzhak would soon to be captured.

They frantically burned or otherwise destroyed anything that might be useful to the enemy.

Food was eaten quickly and plentifully. Clothing was piled on – a strange irony compared to the state of his 1940 arrival in the Land.

Spared a massacre like Kfar Etzion, Ben David and others were taken as prisoners of war and escorted onto a bus headed for Hebron.

Israeli statehood would be declared in the afternoon.

Throughout much of the country, dancing and singing jubilantly marked the end of two millennia of helpless statelessness. Celebrations erupted in displaced persons camps across Europe. Jews around the globe could hardly believe the radio reports.

Yet Ben David and his comrades, bandaged and fearful in the Hebron police station, knew nothing of it.

They sanctified the Sabbath over two biscuits and cried – over friends and loved ones that had been killed, over the fall of the Etzion Bloc and the uncertain future.

In his autobiography, Ben David recalled the feelings of sadness that night rivaling those he felt when the Patria had sunk and when he found out about the destruction of his hometown in the Holocaust.

Saved by the Arab Legion – more than once

The next day the mayor of Hebron – followed by an armed and angry gang of locals – came into the prison compound demanding the blood of Ben David and the other few remaining Jewish defenders of the Etzion Bloc.

As they cocked their weapons and prepared for a massacre, an Arab Legion officer stepped forward, warning them not to take another step, or they themselves would fall victim.

A fight broke out between the Legion men and the mayor’s gang, with the latter ultimately forced to flee.

The officer explained to the mayor that the Arab Legion was responsible for the welfare of the POWs and that King Abdullah I himself had ordered that not a hair on any one of their heads be touched.

Soon after, an Egyptian soldier planned on killing prisoners by dropping a grenade into their cell, an Arab Legion soldier once again interfered, sparing their lives.

The prisoners were held in Hebron for three weeks – a period remembered for its hunger, and crowded and filthy conditions. Finally, on the verge of starvation, the hundreds of POWs from the Etzion Bloc – men and women – were placed in a convoy to be taken to Transjordan.

The vehicles cruelly stopped opposite the remnants of what had once comprised the Jewish settlements of the Etzion Bloc – now virtually unrecognizable heaps of rubble.

The convoy crossed the Jordan River and Arab forces once again had to step in to save the Jews from being stoned to death at the hands of an angry mob. Saved again, they were taken to the Umm Al Jamal POW camp, where they were held captive until the end of the war.

David Ben David finally stepped foot in the State of Israel in early 1949. He had been imprisoned since the day of its birth.

In the years to come, Ben David – who had also fought in the British Army during WWII and helped survivors come to the Land of Israel after the war – would work to give proper burial to those who had fallen defending the Etzion Bloc and support their widows and orphans.

He would also help establish the new communal settlement of Nir Etzion, just a few kilometers from where he had once washed ashore – half-naked, soaking wet, exhausted and alone.

Thanks to the Toldot Yisrael team for their assistance preparing this article. Toldot Yisrael is an initiative dedicated to documenting the testimonies of the State of Israel’s founding generation. The collection is now deposited at the National Library of Israel in Jerusalem. An extended Hebrew interview with David Ben David can be found here: Part I, Part II.