The story behind Ben-Gurion's refusal to wear a head covering at the funeral of S.Y. Agnon… 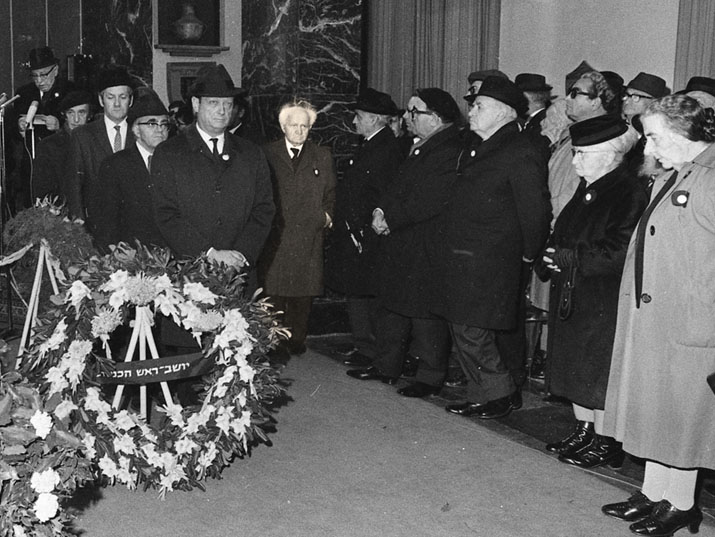 On February 18th, 1970, Israel’s President, the Prime Minister, the Chief Rabbi and Supreme Court judges all came to pay their last respects to the esteemed writer, Shmuel Yosef Agnon.

David Ben-Gurion, by then a former prime minister, also attended the funeral. Unlike the rest of the attendees and contrary to what was customary at Jewish funerals, Ben-Gurion decided not to wear a head covering – a kippah (yarmulke) or any form of hat.

Rabbi Menachem Porush, who was at the funeral, noticed this. Porush, one of the leaders of the ultra-Orthodox political party, Agudat Yisrael, decided to act and approached Ben-Gurion; he figured the iconic Israeli statesman had simply forgotten to bring a head covering and offered him one. To his astonishment, Porush learned this was no mistake – Ben-Gurion had intentionally left his head bare. “I have a hat with me,” Ben-Gurion said, “but I will not wear it in light of the government’s decision to force religion with regard to the question of who is a Jew.”

Ben-Gurion was referring to an amendment to Israel’s well known Law of Return, which carried in the first reading at the Knesset a few days earlier and stated for the first time in the history of law in the State of Israel an answer to the longstanding question: Who is a Jew? After countless debates, arguments, demonstrations and struggles, the Knesset approved the amendment, according to which “a Jew is someone with a Jewish mother or someone who has converted to Judaism and is not a member of another religion.” Ben-Gurion deeply objected to the mixture of religion and state embodied by the endorsement of a halakhic approach to such a sensitive issue.

But Rabbi Porush would not let up. “Don’t you think that the religious Agnon would expect his escorts to cover their heads?” Ben-Gurion had an answer to this, as well: “I visited Agnon not so long ago, and he said nothing when he saw that I was bareheaded”.

Speaking of Ben-Gurion and Agnon, the latter was one of several intellectuals and religious leaders of whom in 1958 Ben-Gurion himself asked to answer the question: Who is a Jew? Agnon replied in a letter that the answer could be found in the “Shulchan Aruch,”, a 16th century book of Jewish law, but added that “religion and state at this time are like two neighbors who are not comfortable with each other. You, upon whom the well-being and the welfare of the state depend, would do well to stay away from discussing matters of religion, for good or for better, so that your attention will be free for matters of state.”

But there’s more; those looking through the historical photographs of Agnon’s funeral may have noticed that at a certain point, Ben-Gurion indeed donned on a hat. Had he changed his mind and decided to honor Rabbi Porush and the ceremony? Not in the least. The chilly winds on the Mount of Olives, where Israel’s first Nobel laureate was buried, were the only reason for the former prime minister’s dramatic change of wardrobe.