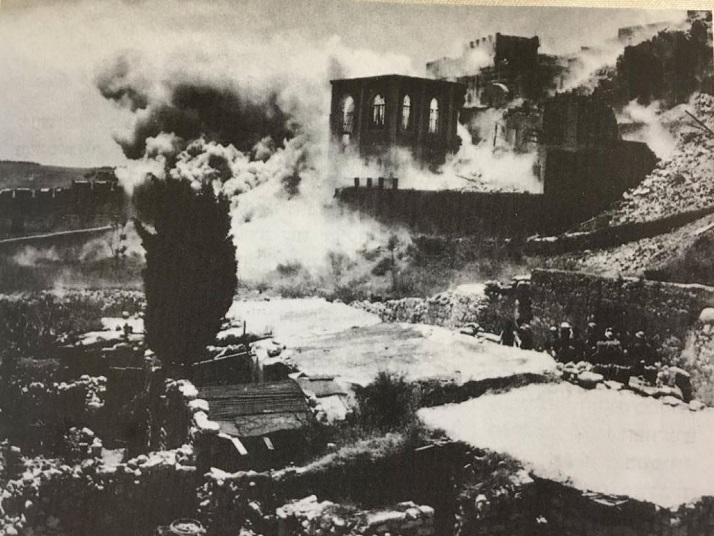 The Old City's Jewish Quarter in ruins. The photograph was taken by the Arab Legion following the battles.

“What is the meaning of the white flag that was seen being carried near the matzah factory?” – read the urgent telegram sent on May 28th, 1948th, from the Jerusalem District Headquarters to the command post in the Jewish Quarter of the Old City of Jerusalem. The State of Israel had been declared exactly two weeks earlier, with the War of Independence underway for nearly six months already.

“We began negotiations on the retrieval of the bodies of the dead in order to stall. The first result of this was the Arabs ordering a ceasefire. Further details are still unknown” – replied the Haganah-appointed commander of the Jewish Quarter, Moshe Rusnak. A few hours later, the entire Jewish Quarter surrendered; nearly all of the Quarter’s buildings were blown up, soldiers were taken captive, and the remaining civilians were evacuated to the new city.

On August 17th, 1948, with battles still taking place throughout Israel, the Jerusalem District Commander David Shaltiel appointed a committee to investigate the surrender of the Old City to Jordan’s Arab Legion force.

On February 14th, 1947, British Prime Minister Clement Attlee announced to his cabinet that Britain would be withdrawing from Mandatory Palestine. Four months after his appeal to the United Nations to appoint a committee to make recommendations “concerning the future government” of the country, the UN presented what would soon be known as “The Partition Plan”, dividing the land into two states – one Arab, one Jewish – that would coexist alongside each other.

The section that was most difficult for both sides to stomach related to the future of Jerusalem: Unlike the rest of the country that would be divided, Jerusalem would not be the capital of either state, but would rather be placed under an international regime sponsored by the UN. Although David Ben-Gurion, then chairman of the Jewish Agency (the Zionist government of the state “in-the-making”), agreed to the plan, many in Jerusalem believed that “even though no violence had broken out as yet, it felt as though all of a sudden an invisible muscle was suddenly flexed. It was not sensible to go to those areas anymore.”(Amos Oz, A Tale of Love and Darkness)

UN Resolution 181 – the Partition Plan – was approved with the votes of 33 countries in favor and set off the battles of the War of Independence. On the very evening the resolution was adopted, dozens of Arabs rushed to the city’s center, looking to harm any Jew they could find. Within two weeks the Old City’s Jewish Quarter was under attack and its residents found themselves under siege of the superior Arab forces. As the fighting grew more intense, the Zionist leadership became more and more convinced they were losing their hold on Jerusalem.

First, Erst and Hausner wanted to explore the military developments that preceded the surrender. They asked Weingarten, “Did we lose a lot of territory between the day of the breakthrough and the surrender?” The “breakthrough” to which they referred was most likely the capture of the Old City’s Zion Gate by the Haganah’s elite Palmach force on the night of the 18th-19th of May. This force, however, was not able to make any further progress, and in fact it was the Arabs who soon stormed the besieged Quarter and began to seize control of more and more positions. The Quarter’s handful of defenders put up a courageous and determined defense to block the Arab advance, staving the invaders off of Sha’ar HaShamayim street, one of their very last strongholds.

Weingarten recounted that as the military situation deteriorated, the fighters’ morale suffered a severe blow: “Spirits were very low. Some of the men were at the synagogues along with the locals and had to be located.” “There were various rumors about the supply of ammunition,” Weingarten added, “there were no grenades” and every bullet was counted before being fired. This was in stark contrast to the Arab Legion soldiers who used mortars, submachine guns and explosives to conquer the Quarter’s buildings as well as the defensive positions scattered throughout.

As the attackers advanced, communication between the Quarter’s headquarters and the fighters deployed in the remaining positions broke down. “A sore wound, the last days were chaos. At times Pinkas [referring to Mordechai Pinkas, one of the commanders in the field] was able to take control; other times he was not. It was like ‘a mouse in a trap’.” The besieged Quarter was not only cut off from food supply from the outside; all of the Quarter’s bakeries were conquered by the invading force, and the only food left for the residents was pita bread they made themselves. “Pita was flour + salt. And some jam.

Two days after the assault began, the Arab Legion’s 6th battalion entered the Old City. 650 Arab fighters now faced 131 Jewish defenders. The attackers were encouraged by the difference in numbers and by their superior arms. There was no doubt the Quarter would soon fall; it was only a matter of time.

Though the Palmach force was able to get as close as Zion Gate, the failure to actually reinforce the desperate defenders of the Jewish Quarter only led to more frustration. Weingarten reported that “The military command did not make a substantial attempt to communicate with the civilians. It was known – ‘backup coming in 30 or 15 minutes’– and this led to disappointment.”

As the days went by and ammunition ran out, the bitter truth was revealed: “A few fought fiercely; others hid.” The idea of ​​negotiating surrender was first suggested by the Arab Legion. “Every day, the Arabs spoke through a loudspeaker in three languages, requesting that we negotiate. We did not answer.”

By May 28, it became clear there was no hope for rescue, and if they did not soon surrender, the Quarter’s residents would be slaughtered by the attackers. Weingarten believed that none of the residents had the courage to personally engage in “negotiations with the Arabs”. At that point, Weingarten conveyed, the Quarter’s commander, Moshe Rusnak, appeared to have been “cracking”, but he refused to consider surrendering. Subsequently, a delegation of rabbis led by Weingarten approached Rusnak and demanded that negotiations for surrender begin before the Legion forces moved against the last remaining defensive positions. Rusnak refused to allow the delegation to discuss surrender; he demanded that the meeting’s agenda be the evacuation of both sides’ injured and dead. Their persistence paid off: “We were sent with a man holding a white flag.”

Around 10 am, the delegation of rabbis met with the commander of the Arab Legion’s 6th Battalion, General Abdullah El Tell, at Cafe Alsheich. The Jordanian commander refused to discuss the evacuation of the injured and dead. Instead, he gave the rabbis an ultimatum: Surrender or else. He gave them an hour and 15 minutes to return with an answer.

At one o’clock in the afternoon, the Quarter’s commanders and delegates gathered to discuss the surrender proposal. All attendees, save for an Irgun representative who abstained, voted in favor of surrender. This time Rusnak joined Weingarten to settle the surrender with the Jordanian commander. Minutes earlier, Rusnak sent a telegram to the District Headquarters, reassuring them and explaining that the talks were about transferring the wounded and dead, and not about the terms of the Quarter’s surrender. Though it is not mentioned by Weingarten, historian Yitzhak Levy suggests that both parties – district commander David Shaltiel and the besieged Quarter’s leader, Moshe Rusnak – knew the defenders had no choice but to surrender, yet they both refused to admit this bitter truth to each other.

“Perhaps more could have been done,” Weingarten concluded, refusing to point an accusing finger at the Jewish Quarter administration or at the Jerusalem District Headquarters, “The Jewish people have a long and bloody history.”