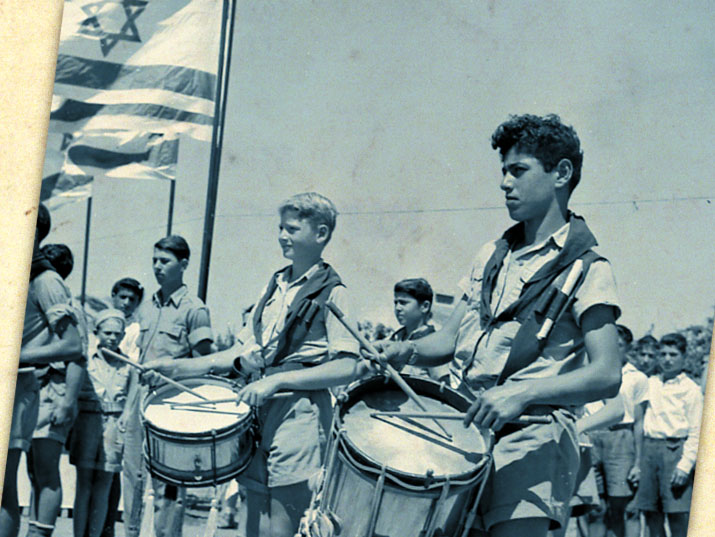 Photo by Beno Rothenberg, the Meitar Collection, the National Library of Israel

How is a holiday created out of thin air? Well, one method is legislation.

Israel’s “Independence Day Law” from 1949 set the date for Independence Day as the 5th of the Hebrew month of Iyar, while also allowing for the holiday to be brought forward or delayed in the event that the 5th falls on a Sabbath. Additionally, the law authorizes the Prime Minister to “determine the symbols of Independence Day” and even “to instruct regarding the waving of flags and celebrations”.

The question of how Israeli Independence Day came to be celebrated in the way that we are familiar with today is a complex one, and we may very well deal with that in the future, but for now, we would like to momentarily return to the 5th of Iyar, in the Hebrew year 5709 (1949), only some three weeks after the above law was passed.

Confusion was the order of the day.

To be completely honest, that 5th of Iyar was not exactly the only “First Independence Day” to be celebrated in Israel. It was preceded by “State Day”, held on the 20th of Tammuz (July 27th, 1948) – just a few weeks after the actual declaration of Israel’s independence. This date was chosen as it was the anniversary of Theodor Herzl’s death, with the state authorities seeking to link between Herzl’s vision and the new State of Israel which had just been established. The main event on “State Day” was the first ever military parade conducted by the young IDF.

But back to the other “First Independence Day” – the 5th of Iyar, 5709, which fell on May 4th, 1949. How were people supposed to celebrate Independence Day anyways? No one knew exactly, but a few things could be taken for granted, including folk dancing in the streets (which reminded people of the jubilant spontaneous celebrations after the UN Partition Plan vote in late November, 1947). Plans were made for celebrations in towns and cities across the country, including light displays, flag-waving, concerts by municipal orchestras, torchlight parades and various rallies and marches.

On the eve of the holiday, Prime Minister David Ben-Gurion held a special Independence Day speech, published the next day in the papers. Many of the events included a memorial prayer for fallen soldiers, as Israel did not yet have an official day dedicated to remembering them. Ben-Gurion also hosted dignitaries from abroad at a special Independence Day reception held at his office in IDF Headquarters in Tel Aviv.

But there was little doubt about the planned highlight of the day – another military parade by “our victorious army of liberation”, the Israel Defense Forces – what else? Not only one but two parades were planned, in both Jerusalem and Tel Aviv. The Jerusalem parade went ahead without major incident, but the big story of Israel’s first Independence Day was the controversial Tel Aviv parade.

“The Parade That Didn’t March”, screamed the Hebrew headline in Maariv the next morning. The name stuck and it is remembered to this day. At first, everything seemed fine. Representatives from the IDF’s various corps marched down the city’s streets: The navy, the medical corps and veterans of the pre-state Haganah organization all displayed their arms. Jewish and Druze soldiers proudly marched alongside each other. Military jeeps and artillery guns were received with cheers by onlookers while a handful of military aircraft flew overhead – all that the Israeli Air Force had at the time. And of course it wouldn’t be a parade without a marching band!

But by 4 o’clock, when the marchers were due to arrive at the main stage erected on Dizengoff Street to salute the Israeli leadership, the rumors had already begun to spread – the parade had been cancelled! “People stood and cried. Like children,” Wrote Maariv editor Dr. Ezriel Carlebach. The parade could simply not make its way to the main stage on Dizengoff Street because of mass overcrowding at the corner of Allenby and Ben-Yehuda.

Carlebach described the scene: “When they [the crowd] were told for the third time that it [the parade] would not be coming because it could not clear a path from Mugrabi Square to Idelson Street, a stretch of some two hundred meters – they simply did not believe it. It could not be true. OUR army? The army that had reached all the way to Eilat, that could easily have entered Damascus, was now incapable of making it to Ben-Yehuda Street? Ridiculous, idiotic.”

The humongous crowds that showed up to watch the parade had spilled over onto the streets and blocked the path of the marchers. All of the efforts by the police to open the roads ended in miserable failure. Eventually, the organizers were left with little choice but to call off the parade before the crowds slowly dispersed in bitter disappointment. A senior IDF officer present at the scene was quoted in the Herut newspaper, saying “The Israel Defense Forces managed to conquer everything except the streets of Tel Aviv”.

In retrospect, it seems that organizational failures led to the debacle. The authorities apparently did not foresee the sheer quantities that showed up to watch the spectacle. Reports cited crowds numbering in the hundreds of thousands – in a country with a population of some 600,000 people. In addition, roads were only blocked off shortly before the event, further contributing to the chaos. The next day, the papers were already reporting that a commission of inquiry would be investigating the reasons for the fiasco.

Following the embarrassment surrounding the Tel Aviv parade, it was decided to hold yet another “State Day” celebration on July 17th, 1949. Another parade was organized, this one on a smaller, more modest scale, in order to make amends and finally complete the unfinished march. This was the last time that Israel’s independence was celebrated on the day of Herzl’s death, and the 5th of Iyar later became solidified as the official Independence Day of the State of Israel. The practice of marking Israel’s Memorial Day on the day before Independence Day began in 1951. This was also the first year of the traditional Independence Day torch lighting ceremony on Mt. Herzl in Jerusalem. The Israel Prize ceremony was first held on Independence Day, 1953, and the first International Bible Contest was held on the State of Israel’s tenth birthday in 1958.

Slowly but surely, year after year, Israel’s Independence Day has developed into the national celebration we know today.

All of the photographs displayed here are taken from the Beno Rothenberg Archive, which is part of the Meitar Collection at the National Library of Israel. Rothenberg documented many aspects of Israeli society, culture and life during the first few decades of the state. You can see more examples of his photography here, here and here.