A Peek into Paradise: What Can Medieval Manuscripts Teach Us about Adam and Eve?

Home > Deciphering Jewish Manuscripts > A Peek into Paradise: What Can Medieval Manuscripts Teach Us about Adam and Eve?
Judaism

Was the serpent originally a form of ape? What fruit did the first sinners eat? And how does Lilith figure into the story? These intriguing questions have stirred the imaginations of illustrators of Hebrew manuscripts throughout history 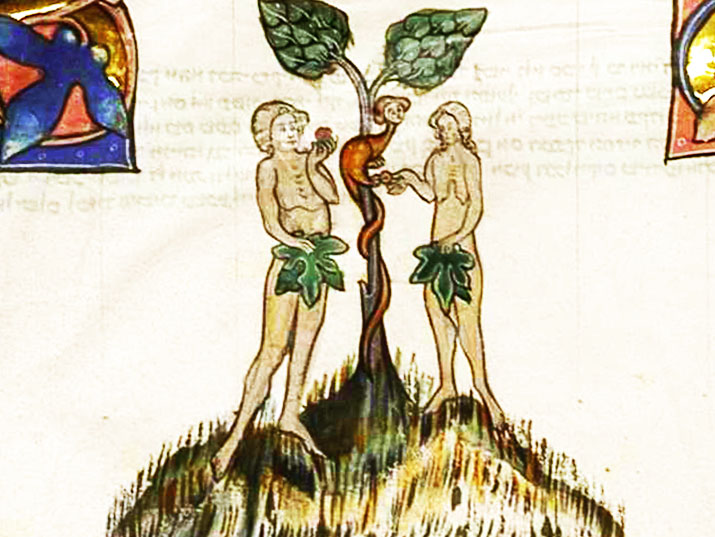 The Temptation of Adam and Eve, an illustration from the Kaufmann Mishneh Torah

And when the woman saw that the tree was good for food, and that it was a delight to the eyes, and that the tree was to be desired to make one wise, she took of the fruit thereof, and did eat; and she gave also unto her husband with her, and he did eat. And the eyes of them both were opened, and they knew that they were naked; and they sewed fig-leaves together, and made themselves girdles. (Genesis 3:6–7)

The year was 1296. Maimonides had been dead for nearly a century, but his groundbreaking writings were still making waves, his unique voice echoing across the Jewish world. In northern France, one of the greatest works in the history of Hebrew manuscript illumination was being copied and illustrated: a manuscript of the Mishneh Torah, Maimonides’ great halakhic work, also known as Sefer Yad ha-Hazaka (“Book of the Strong Hand”). In the 19th century, Prof. David Kaufmann, the head of the Jewish Theological Seminary in Budapest, purchased the manuscript, which is today preserved, together with his entire library, at the Hungarian Academy of Sciences in Budapest.

The title pages of each of the manuscript’s 14 sections are adorned with delicate floral ornaments as well as a rectangular cartouche featuring the opening word of the text in large letters. Some of the pages’ lower margins are decorated with drawings related to the text. Most of the illustrations in the manuscript depict familiar biblical scenes. For example, Samson killing the lion, David and Goliath, the binding of Isaac and Moses receiving the Ten Commandments on Mount Sinai. Aside from these, there are also illustrations of medieval knights and hunters. The prevailing hypothesis is that the illustrator was Christian.

The manuscript’s final illustration (Book 13, vol. IV, fol. 70) shows Adam and Eve standing on either side of the Tree of Knowledge. Most intriguing is the shape of the snake, which has arms! What’s more, the snake bears more than a passing resemblance to… a monkey.

Another question with regard to the Kaufmann Mishneh Torah illustration is why Adam and Eve are already depicted covering themselves with fig leaves if they are only now eating the fruit from the Tree of Knowledge. How are they already aware of their nakedness?

The four chapters of the Bible dedicated to the story of Adam and Eve before their expulsion from the Garden of Eden left future generations with much material for thought and creative expression. While the Jewish sages and later commentators repeatedly discussed various and bizarre questions related to humanity’s original ancestors, the illustrators of Hebrew manuscripts over the generations concentrated almost exclusively on a particular dramatic moment in the story: the eating of the fruit of the Tree of Knowledge and the destructive consequences of violating the divine proscription.

The Comic Strip in the Sarajevo Haggadah

Several decades after the decoration of the Kaufmann Mishneh Torah, Adam and Eve appear again, this time in the work known as the Sarajevo Haggadah. Today, this Haggadah is displayed in the National Museum of Bosnia and Herzegovina in Sarajevo, hence its name. However, it is thought that the magnificent Haggadah was actually written and decorated in Barcelona, around the year 1350.

Unlike the usual focus on the scene of the Temptation, the Sarajevo Haggadah actually shows Adam and Eve in a variety of scenes. After two pages of illustrations depicting the creation of the world, we are introduced to the couple. The panels are reminiscent of a comic strip that reads from right to left and top to bottom. We first see Eve being formed from Adam’s side (or rib) and immediately after, Adam and Eve are seen eating from the forbidden tree while the snake watches them. In the bottom illustration on the right, the couple realize they are naked and cover themselves with fig leaves, and at the left, we see them banished from Paradise. Both are now clothed and Eve is spinning wool while Adam works the land by the sweat of his brow.

Now let us return to one of the most intriguing details in any illustration of Adam and Eve – the shape of the serpent. In the Sarajevo Haggadah, the serpent appears in its familiar form, according to the biblical curse: “Because thou hast done this, cursed art thou from among all cattle, and from among all beasts of the field; upon thy belly shalt thou go, and dust shalt thou eat all the days of thy life” (Genesis 3:14). In the illustration at the top, the limbless snake coils around the Tree of Knowledge, and in the illustration below it is slithering on its stomach. Eve, apparently having learned to be wary of it, looks as if she might use her spindle to rap the snake on its head.

In the bottom right scene, rays of light appear over the tree on the left. According to the Bible, Adam and Eve “heard the voice of the LORD God walking in the garden toward the cool of the day.”  “Where art thou?” God asks Adam, who immediately justifies himself and explains: “I heard Thy voice in the garden, and I was afraid, because I was naked; and I hid myself.” Why? “The woman whom Thou gavest to be with me, she gave me of the tree, and I did eat.” (Genesis 3:7–12). The anonymous illustrator of the Sarajevo Haggadah imagined God as rays of celestial light, a familiar visual tactic for representing the image of God, and especially the divine voice.

The Image of God in the Golden Haggadah

Some 30 years before the writing of the Sarajevo Haggadah, around 1320, another Passover Haggadah was written and illustrated in Barcelona. Named the “Golden Haggadah” for the gilded backgrounds adorning the 128 illustrated pages out of the 322 pages in total in the manuscript, this Haggadah also opens with illustrations of biblical scenes. However, the first illustration does not present the creation of the world. Instead, it shows Adam naming all the animals in Paradise, according to a nearby inscription.

The second illustration in the Golden Haggadah contains two scenes familiar from the Sarajevo Haggadah: the creation of Eve from Adam’s side and the pair eating the fruit of the Tree of Knowledge of Good and Evil. The startling innovation here concerns the portrayal of the image of God, who appears from a cloud to scold the three sinners—Adam, Eve and the serpent. Though the artist may have intended to portray an angel and not God himself, many might consider this illustration a violation of the second commandment: “Thou shalt have no other gods before Me. Thou shalt not make unto thee a graven image, nor any manner of likeness” (Exodus 20:2–3). The inscription above the illustration reads simply: “Adam and his wife naked.”

Similar to the Sarajevo Haggadah, the illustrations in the Golden Haggadah are separated into four panels. On the opening page, below the illustrations of Adam and Eve, we see the murder of Abel by Cain and next to this, Noah and his wife and sons leaving the ark. Here, too, the figure of the watchful God appears above.

Between Judaism and Christianity

The story of Adam and Eve was naturally embraced by Christian tradition. The Western Church even preserved one of the apocryphal books, “The Life of Adam and Eve”, which recounts their story after the expulsion from the Garden of Eden.

Influences in the opposite direction also exist – Hebrew manuscripts from Europe often show the adoption of Christian motifs, methods of copying and illustration styles. The Frankish knights from the Kaufmann Mishneh Torah are but one of many examples.

Another example of the inter-religious influence associated with Adam and Eve can be found in the Schocken Bible. This manuscript, originating in southern Germany, is preserved at the Schocken Institute in Jerusalem, and dates to around 1300. The beautiful title page features 46 miniatures in medallions, each depicting a scene from Genesis. The blue and red color scheme was common in stained glass windows in Gothic churches as well as Christian manuscripts from the period.

The first two medallions are dedicated to Adam and Eve. The first shows the Temptation, and the second, the expulsion from the Garden of Eden. Note that in the Schocken Bible, the couple is depicted naked even after the expulsion. Clearly, even after the sin, “man … shall cleave unto his wife, and they shall be one flesh” (Genesis 2:24).

Indeed, Adam and Eve’s devotion to each other did not go unnoticed in the Jewish artistic community over the ages. We find a hint of this in many Jewish marriage contracts (Ketubbot) adorned with the figures of the first couple. For example in a Ketubbah dating back to 1629 from Mantua, Italy, Adam and Eve are depicted reaching out their hands and holding what appear to be golden apples. The illustration raises another question that challenged the Jewish sages: What kind of fruit grew on the Tree of Knowledge? The most popular candidate is the apple of course, but the biblical text offers no evidence to support this claim.

Two illustrations are devoted to the story of Adam and Eve. The first, on the right, shows Adam naming the animals. Next to it, on the left, is the creation of Eve. Notice how in both illustrations, the artist took care to preserve Adam’s modesty by adding a large-leafed plant to cover his loins.

Illustrations of the first couple can be found in bibles,  halakhic books, Haggadot and Ketubbot. The purpose of the illustrations varied according to the type of text. In Ketubbot, their appearance was meant as a living example of romantic love; in Haggadot and illustrated bibles, their story was intended as a landmark in the historical continuum from Creation to the giving of the Torah and the birth of the Jewish people; and in Maimonides’ Mishneh Torah they are a purely decorative ornament.

In the World of Demons and Spirits

We conclude with a more modern illustration of Adam and Eve—taken from a Jewish mystical amulet. Apparently, the most common Jewish amulets were intended for the protection of new mothers. These amulets cited the names of Adam and Eve, as well as three angels who were called to protect the mother and her newborn.

An entire tapestry of Jewish legends has been woven into the origin story of this particular type of amulet. Some of these legends describe the Jewish mythological figure of Lilith as Adam’s first wife, who was banished before she could bear him sons. In a desperate attempt to take revenge on Adam and all his offspring, the demonic Lilith devotes herself to harassing newborns and their mothers. She strangles babies in their sleep, seduces men and becomes pregnant with the wasted sperm, giving birth to demonic stepchildren.

According to Jewish folklore, three angels—Senoy, Sansenoy and Semangelof—were sent to stop Lilith and return her to Adam. But she claimed that she was now the partner of the great demon Samael and could no longer return to her former husband. The angels managed to extort a promise from her that she would not harm the descendants of Adam from his second wife Eve, which would explain the appearance of their names next to Adam and Eve on the amulets.

The earliest known printed Jewish amulet is a birthing amulet of this sort, featuring a depiction of Adam and Eve and published in Amsterdam around 1700. Suffice it to say, the scene is a familiar one, featuring a notoriously untrustworthy serpent…