The only mentions of a sukkah in the Cairo Genizah refer to communal sukkot in synagogue courtyards. A fact that caused quite a bit of trouble.

False accusations and brawls on Sukkot

The Cairo Genizah is a famous collection of Jewish manuscript fragments, originally stored in Cairo’s Ben Ezra synagogue. It contains around 300,000 items, some of them over a thousand years old. It does not, however, contain any documentation of private sukkot erected in building courtyards or on balconies.

In the overcrowded neighborhoods of Fustat, the medieval capital of Egypt, now Old Cairo, Jewish residents shared common courtyards in multi-story apartment buildings, which was why on Sukkot, the sukkah was built in the courtyard of the synagogue. It should be remembered that for long periods, the synagogue was the center of communal life, the place where the community’s children learned, as well as a hostel for weary travelers, a soup kitchen for the needy and more.

The two synagogues in Fustat—the Iraqi synagogue of the Babylonians, and the “Shami” synagogue of the Syrian Jews, (who worshipped according to the custom of the Land of Israel, which was considered part of Greater Syria or “Sham”)—each had its own sukkah. As communal property, the sukkah was the responsibility of the community leaders, who also were in charge of the day-to-day upkeep of all the communal property. The first document we see here, from 1165, is an account in Judeo-Arabic of the “kodesh” (lit. sacred), meaning the communal assets, in this case of the Shami community. One of the expenses was “cleaning out the pipe in the entry hall, behind the Shami synagogue sukkah, in the presence of the rabbi—31 drahma.”

There was also a sukkah in the courtyard of the Iraqi synagogue, which followed the Babylonian rite. We learn this from an interesting testimony recorded in the middle of the 12th century, about an altercation between two respected members of the community: 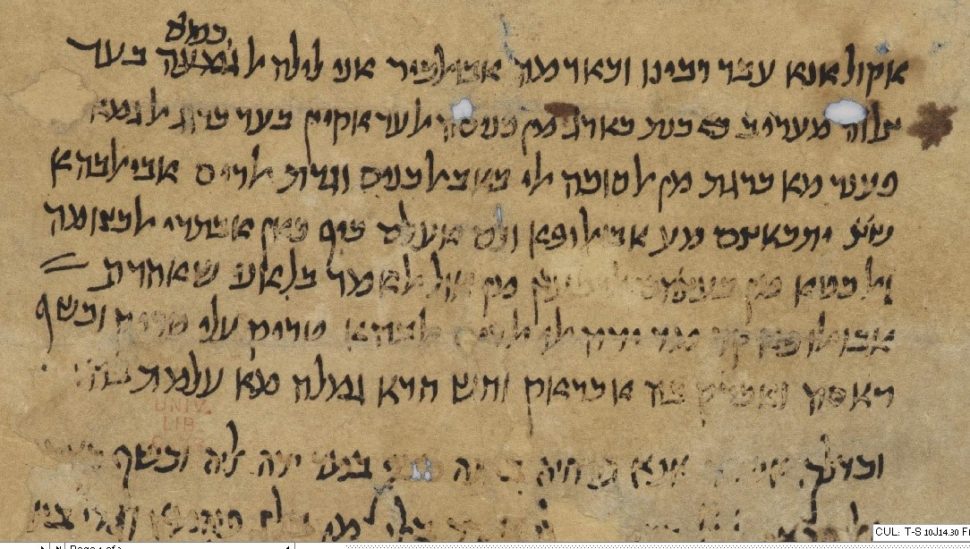 “So say I, slave and servant of our rabbi, Abu Alkhir, that on Thursday evening, after the evening prayer, I was about to leave the Iraqi synagogue after the congregation left. And when I left the sukkah in the direction of the synagogue gate, I saw the honorable gentleman Abu Albaha, may God protect him, quarreling with Abu Alufa, and I don’t know how the quarrel began, but I saw Abu Alufa raise his hand to the gentleman Abu Albaha over and over, and expose his head [i.e., knock his head covering off] and level false accusations at him.”

Another testimony which appears later also confirms the details of the incident described above. The page was sent to the Nagid, the head of the Egyptian Jewish community, but alas, we still do not know the true reasons for the brawl or how the conflict was resolved.

So this year, while it can occasionally get hot and crowded in the sukkah, let’s try to be respectful and avoid any kerfuffles!

The “kodesh” expenditures can be found at Cambridge University Library, TSAr18 (1) .155, and were published by Moshe Gil in his book Documents of the Jewish Pious foundations from the Cairo Geniza, document 67. The testimony, also in Cambridge University Library, TS10J14.30, has not yet been published in full, and is mentioned in Shlomo Dov Goitein’s A Mediterranean Society, Vol. II.