A Mobile Feast: Sukkot on Wheels During the Yom Kippur War

Rare photos reveal how IDF soldiers managed to fulfill the commandment to “sit in the sukkah”, even as war raged in the north and south 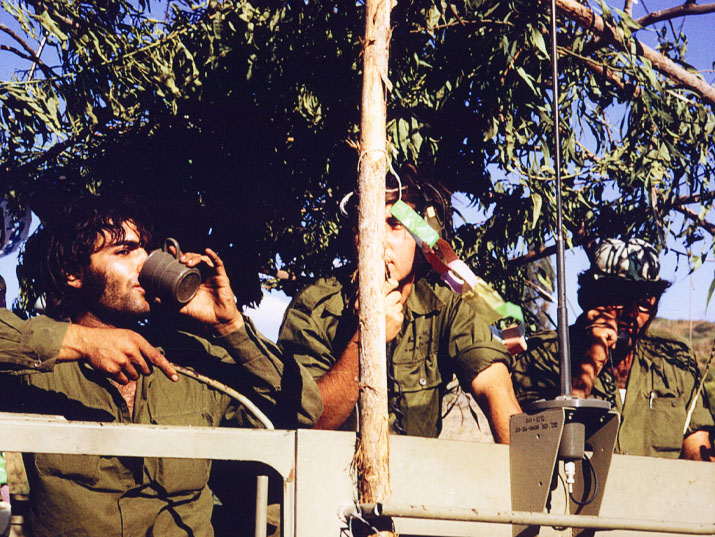 A sukkah on an IDF vehicle, October 1973. The Nathan Fendrich Collection, the Pritzker Family National Photography Collection at the National Library of Israel

The Yom Kippur War took its name from the sacred fast day on which the deadly conflict broke out and surprised the State of Israel. The sirens wailed on Saturday, October 6, at 1:55 pm. However, it is worth remembering that the war was still underway during the Jewish holiday of Sukkot which took place soon after. Thus, enlisted and reserve soldiers found themselves “celebrating” the harvest festival on the frontlines in both the Sinai Desert in the south and the Golan Heights in the north.

“IDF soldiers are exempt from the sukkah commandment,” the chief military rabbi, Brigadier-General Mordechai Piron stated in a special proclamation on Sukkot in the midst of the Yom Kippur War. “Their duty at this time is to completely defeat and destroy the enemy,” the rabbi stated, “and whoever is unable to perform the mitzvah of sitting in the sukkah is exempt from it.”

Despite this unequivocal declaration, there were soldiers who nevertheless tried to observe the mitzvah of sitting in the sukkah, even at the front. What probably drove the battle-weary soldiers was their desire for even a little of the holiday atmosphere, a brief respite.

A reporter for the Al HaMishmar newspaper who accompanied the soldiers in the difficult battles along the Suez Canal in the south reported in Hebrew: “Despite the bitter fighting, there is no forgetting that civilian life goes on. On the frontline we discovered an improvised sukkah: a half-track vehicle decorated with branches, completely kosher.”

In the collections of the National Library of Israel we found several rare photographs documenting soldiers erecting improvised sukkot on jeeps and other military vehicles. It’s unclear if all of these creative sukkah booths fulfill the  requirements according to Jewish law, but it is very possible that for the soldiers at the front, they provided some joy and a sense of home during difficult days.

Among the photos that stand out in particular are those taken by the photographer Nathan Fendrich. The 39-year-old Jewish-American tourist had come to Israel to document historical and archaeological sites. Finding himself “stuck” in Israel at the outbreak of the war, he decided to travel between the various fronts armed with his camera. Among hundreds of fascinating photographs, we found a handful documenting some improvised sukkot.

The Sukkot holiday of 1973 began under the shadow of desperate battles on both fronts, with real concern for the survival of the Jewish state, but by the end of Sukkot the turning point had come, and IDF forces moved from defense to offense. A journalist for Maariv reported on October 17 from deep in Syrian territory:

“On the main road approaching Hushniya—in between two damaged tanks, a yellowing thatch blows in the wind covering an improvised sukkah. A soldier from the Combat Engineering Corps tells us: ‘The guys from the armored division set up the sukkah. Yes, they managed to fulfill the mitzvah of sitting in it, before they were called to destroy the last enemy pocket at the Hushniya junction.’”

The Nathan Fendrich Collection has been reviewed and described thanks to the generous support of The Leir Foundation.