A Half-Angel, Half-Demon Named Azazel and His Connection to Yom Kippur

What are the strange biblical origins of the term "scapegoat"? And what does it have to do with the Jewish Day of Atonement? 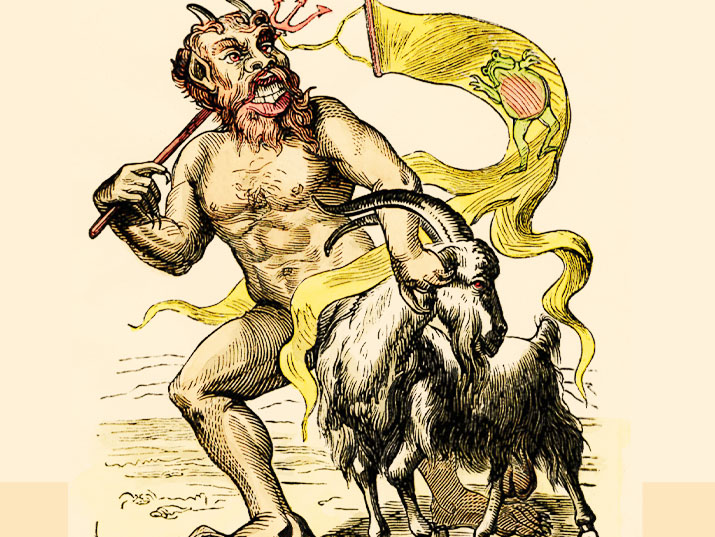 The demon Azazel from the Dictionnaire Infernal

You may or may not be aware that the word Azazel is often used in modern Hebrew in a similar function to the word “Hell” in English – as in a place where you can tell someone particularly annoying to go to. Some of you may also have heard of the ancient Jewish practice, dating from before the destruction of the temple, of se’ir la’azazel (“a goat for Azazel“), the ritual of sending a goat into the wilderness as atonement for the sins of the people, hence the term scapegoat. But did you know that Azazel was also the name of a dangerous and destructive angel, who according to Jewish mystical tradition, was responsible for teaching humans some of history’s most horrible lessons?

So, who exactly is this rebellious angel Azazel and how is he related to Yom Kippur?

It begins with an age-old tradition rooted in the Bible that took place once a year on Yom Kippur. On that day, a day of atonement and fasting, the high priest was permitted to enter the Holy of Holies in the Temple, and bring with him a sacrifice to the God of Israel. After leaving the temple, he cast lots for the two goats. The first would be sacrificed to God on the spot, and the second would be sent into exile to Azazel, after all the sins of Israel had been transferred to it. The casting of the lot symbolized God’s choice of the se’ir la’azazel (the scapegoat to be sent to exile to Azazel).

How are we to understand the instruction to send this creature to Azazel? It all depends of course on the meaning of the word Azazel. According to the Talmudic Sages, the word Azazel, which is mentioned three times in the Bible, is the name of a particular cliff or especially treacherous mountain (Az-el). They explained that on Yom Kippur the high priest would cast lots and decide which goat would be sent to Azazel. Then an emissary would accompany the goat that was selected to the location, some 7 miles from Jerusalem, and there he would throw the poor goat off the cliff to its death.

There is also another way of understanding the word Azazel, and that is as the name of a supernatural being to whom the poor goat must be sacrificed. If God is the essence of good, Azazel is an evil demon or a lesser god that is fed by the sins of the people.

This second interpretation comes from the Jewish apocrypha, or more specifically the First Book of Enoch, which details Azazel’s awful nature. Here there is no trace of a helpless animal forced to carry the sins of the collective through no fault of its own. Rather, Azazel is the rebellious angel at the head of a heavenly plot to take over the earth.

The First Book of Enoch retells the story cited in Genesis (6, 1–4) of the angels who had relations with the daughters of men. The offspring of their unnatural union were the nefilim—giants of renown who filled the earth. Enoch, the seventh generation between Adam and Noah, is naturally the central figure of this book and is chosen to bring God’s message to the rebellious angels. One of those evil angels, and second in importance only to their leader Shemhazai, is our Azazel.

Azazel’s influence on mankind is destructive and eternal: he “taught men to make swords, and knives, and shields, and breastplates, and made known to them the metals of the earth and the art of working them, and bracelets, and ornaments, and the use of antimony, and the beautifying of the eyelids, and all kinds of costly stones, and all coloring tinctures.”  He teaches humans not only how to make weapons of war, he shows them the power of artifice and hypocrisy. And as a result of this destructive influence, “there arose much godlessness, and they committed fornication, and they were led astray, and became corrupt in all their ways.”

Although Enoch warned the rebellious angels, they remained steadfast in their destructive ways. And were punished for it. Thus, Azazel finds himself bound in the desert. This is in fact an original and interesting explanation of the origin of the sacrifice of the scapegoat in the desert:

And again the Lord said to Raphael: ‘Bind Azazel hand and foot, and cast him into the darkness: and make an opening in the desert, which is in Dudael, and cast him therein. And place upon him rough and jagged rocks, and cover him with darkness, and let him abide there for ever, and cover his face that he may not see light. And on the day of the great judgment he shall be cast into the fire.”

Azazel appears in other Jewish works from the first centuries CE, and even more interestingly, he has a starring role in various Christian traditions. The religion that grew out of Judaism also preserved something of the scapegoat from the Book of Leviticus. According to some of the early Church Fathers, Azazel was even one of the names of the devil himself. Is it any wonder that so many illustrations show the devil with the hindquarters and hooves of a goat?

So the next time you decide to make someone a scapegoat, or heaven forbid wish someone a long visit to hell or some other desolate wilderness, we recommend that you hurry and cool off, appease your demons and prove to the devilish Azazel that you were just joking. There’s really no need for all that -after all, the modern kapparot (atonement) chicken is the natural heir to the Biblical and Talmudic scapegoat—a helpless creature onto which we transfer all our sins on the Jewish calendar’s Day of Atonement.