The Temple Menorah in Kabbalistic Manuscripts

Kabbalistic literature looked for ancient symbols through which it could express its daring innovations. It found such a symbol in the Menorah... 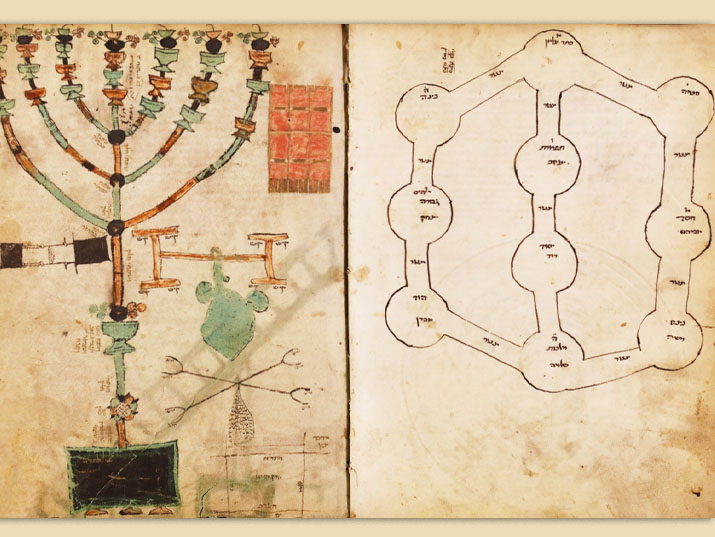 Are the branches of the menorah a symbol of the ten Sefirot (divine emanations) in the Kabbalah? This, at least, is what some kabbalists thought.

Like all Jewish innovators before them, in order to convey their bold new ideas, the kabbalists adopted Judaism’s oldest symbols, in this case—the Menorah. Dozens of illustrated examples in manuscripts and in print offer proof.

The Menorah’s seven branches represented the seven planets according to Gikatilla. The materials from which the Temple menorah was fashioned — gold, silver and copper – in turn hint at the three realms—the upper, middle and lower: “Behold, the secret of the lamp is explained” (Sefer Ginat Egoz, Jerusalem, 1988/89, p. 269).

A more common interpretation sees the Menorah as a symbol of the higher powers, the attributes of God – the Sefirot. Rabbi Asher Ben-David, a kabbalist who lived in the first half of the 13th century in Provence, suggested that the Menorah’s candles “hint at the seven edges,” referring to the seven lower Sefirot.

The seven branches of the menorah were interpreted as the seven lower divine emanations, divided into two groups of three. At their center is the Sefirah of Tiferet (glory), that is the shamash, the middle branch that divides the two halves. Whereas Gikatilla focused on the materials from which the Menorah is made, the kabbalists who interpreted the Menorah as a symbol of the Sefirot focused on the material that lights it—the oil.  The oil and the light of the Menorah provided a solution to the great question of the Kabbalah: How do we reconcile the existence of the one God with the ten Sefirot of the kabbalists?

In ancient times, the Menorah was a sign and a symbol of the divine presence—the Shekhinah that rests over the Temple, and over all of Israel. The Kabbalistic theory separates the hidden God—the infinite—from His attributes and powers revealed in the world—the ten Sefirot that emanate from the infinite.  The oil poured into the seven branches and the light that is lit from them are, as Idel writes, “the abundance which comes from infinity, which is absorbed by the mid-line, which divides them among the six Sefirot, or edges.”