From Amsterdam to Persia: A World of Wine-Stained Haggadot

Home > Passover > From Amsterdam to Persia: A World of Wine-Stained Haggadot
Judaism

Four glasses of wine is a lot, are we really that surprised? 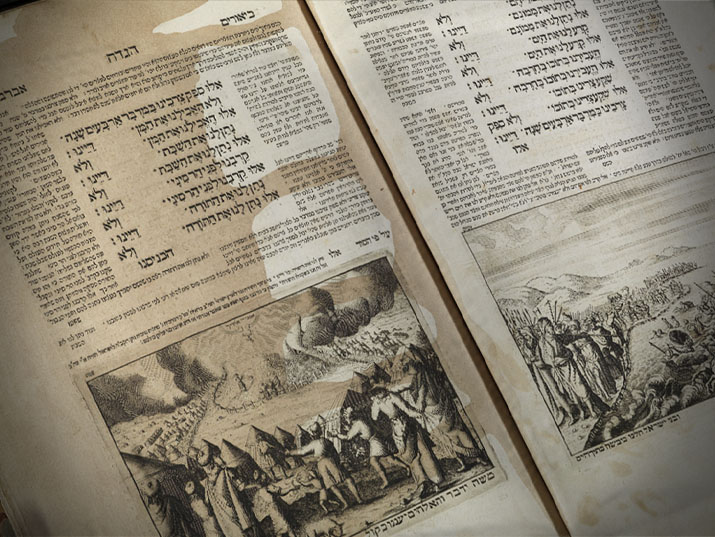 We urge you to please be as understanding as possible. There’s simply no need to rush to judgement here. Those gathered around the Passover Seder table are required by tradition to down four glasses of wine during the holiday meal. As fate would have it, over the course of the Seder, the wine contained in these glasses has been known to spill over onto tablecloths, dishes of food, nearby Seder guests, and even the cherished pages of our Passover reading material: the Haggadah.

Meet the manuscript known in Hebrew as Yom Geulat Avadim (“The Day of Redemption of Slaves”), completed in Persia in the year 1782 by the scribe David Shabtai. This is in fact a Passover Haggadah, containing a distinguishing feature: a series of mysterious stains, which only appear in its second part.

Why is only one section of the manuscript adorned with these stains? The answer likely has something to do with when the different sections were written. Pages 1-13 feature a different script as well as a different type of paper, which was mercifully not exposed to the staining liquid. This section was apparently added to the manuscript at a later stage. It contains a Hebrew piyyut, a liturgical hymn, beginning with the words “Yom geulat avadim”, and also includes a translation into Judeo-Persian.

Generally, when we encounter stained manuscripts, we tend to assume that they resulted from the ravages of time leaving their mark. But in this case, we have reason to believe that the stains are the result of wine spilled during a Passover Seder, as the stained section of the manuscript contains the Passover Haggadah. The work’s colophon states that these pages were copied by David Shabtai, while also adding an ominous warning – “The reader shall rejoice and the thief shall be erased” (“הקורא ישמח והגונב ימח”).

The second stained manuscript we will present here, inscribed in Amsterdam in 1712, also has its stains on the “right” pages. In the case of this Haggadah, the wine stains show up on the very pages which instruct readers to drink from their glasses. True, we haven’t gone to the trouble of sending the Haggadah to a lab to confirm the molecular structure of the liquid we suspect to be wine, but we feel the evidence is quite convincing. The stains naturally re-appear in the section recalling the ten plagues of Egypt, whose reading is accompanied by the traditional dipping of the finger into one’s wine glass. That’s all the confirmation we need.

It seems that four glasses were more than enough for one reader, as a huge wine stain also covers an entire page containing part of the classic Passover song Dayenu.

Ten copies of this edition of the Haggadah came to the National Library of Israel with the deposit of the Valmadonna Trust Collection in 2017. Of these ten Haggadot, the Library decided to digitize the wine-stained copy, as a souvenir of an especially festive Passover Seder held long ago.

The practice of spilling wine during the Seder has endured over time, of course, with our next piece of evidence dating to 1946 – a Haggadah  published in the Land of Israel, towards the end of the British Mandate period.

Here we see that the Jewish pioneers of the pre-state era were just as careless and ill-disciplined as their ancestors in the Diaspora, if not worse! In fact, wine stains can be found on nearly every page of this Haggadah, with no connection whatsoever to written instructions regarding wine-consumption. It seems these people enjoyed their holidays. 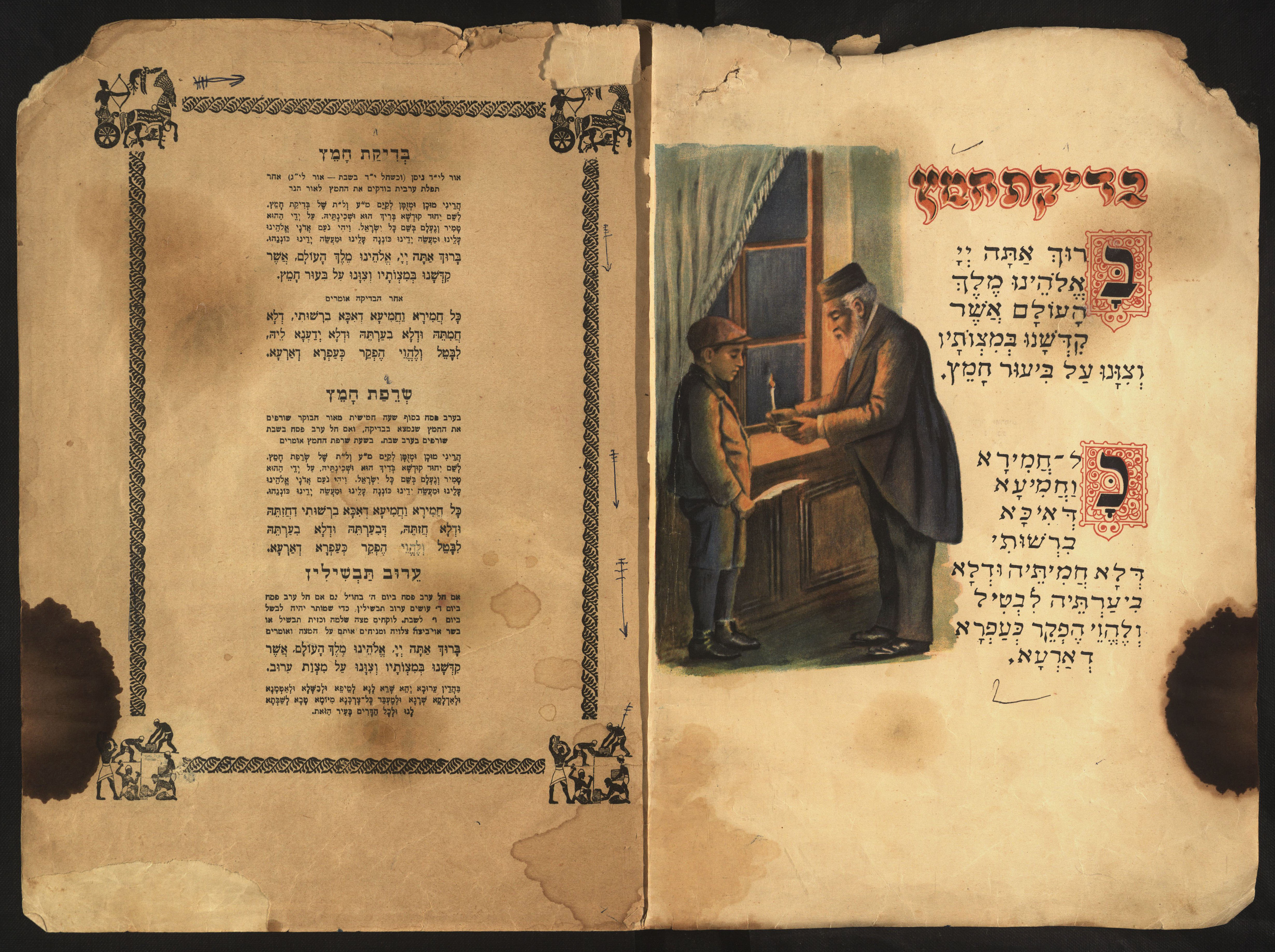 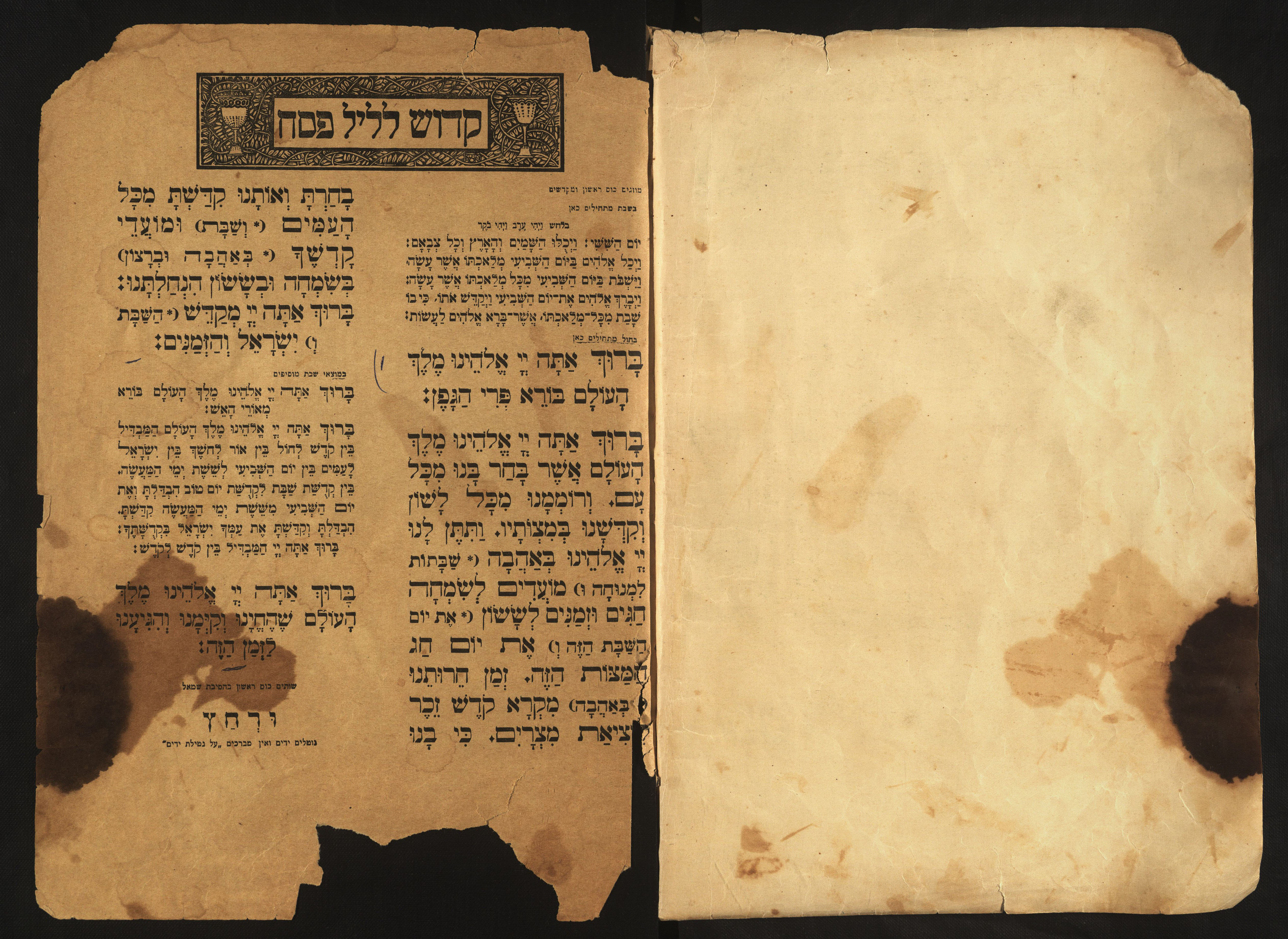