The Worm That Built Solomon’s Temple 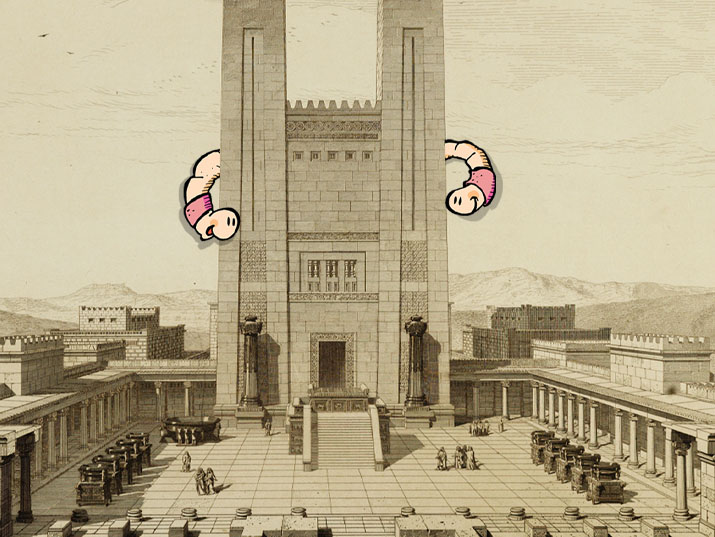 The Book of Kings contains a precise description of the building of the First Temple: its dimensions, the cedar and cypress beams that covered the walls, the gilded ornaments and carvings, and the two cherubim that stood wing to wing above the Ark of the Covenant. It also includes this puzzling verse: “And the house, when it was in building, was built of stone finished at the quarry, and there was neither hammer nor axe (nor) any tool of iron heard in the house, while it was in building.” (1 Kings 6:7)

How could it be that no hammers, chisels or iron tools were used to carve the stones of the Temple, while the Bible also states that the stones were hewn? The Jewish sages offer a simple answer:  the stones were prepared in another location and transported from there to the construction site at the Temple Mount. The Book of Kings even brings support for this explanation: “And the king commanded, and they quarried great stones, heavy stones, to lay the foundation of the house (with) hewn stone.” (1 Kings 5:31).

But our interest here is the alternative explanation, appearing in Rabbinic literature, according to which the stones were hewn with the help of something called Shamir. The obscure Shamir appears in the Bible itself, though not in the Book of Kings. In Ezekiel (3:9) it is written that Shamir is “stronger than flint.” The Hebrew text of Jeremiah 17:1 also makes mention of Shamir, though English versions have translated the word as “flint” or “diamond”: “The sin of Judah is written with a pen of iron, with a diamond [Shamir] point, engraved on the tablet of their heart and on the horns of your altars.” These passages clearly suggest that Shamir is a hard material of some kind.

The Talmud provides additional information about the mysterious Shamir. For example, in Tractate Avot, Shamir is mentioned as one of the ten things created on the “Sabbath eve,” before the completion of the act of Creation. The substances created in that moment were somewhat enigmatic in nature, including the Shamir which had the power to hew stones. Tractate Sotah (48b) explains that the Shamir was used to engrave the stones inserted into the Priestly breastplate (Hoshen), which were cut “like a fig which splits open in summer.” It also says there that because nothing could withstand the Shamir’s strength, it is stored in tufts of wool in a lead box filled with barley bran.

The Talmud, Tractate Gittin (68a) contains the most detailed legend surrounding the Shamir. According to the story, King Solomon asked his advisors how the stones for the Temple could be prepared without the use of an axe or chisel, as it was inappropriate to use tools of bloodshed and war to construct such a building. They told him of the miraculous Shamir but did not know where to find it. The king then summoned forth spirits and demons, but these were also unable to say where it might be found. They did, however, suggest that Solomon consult their lord, Asmodeus, king of demons, who might know the answer. King Solomon sent his general, Benayahu son of Yehoyada, who subdued Asmodeus and brought him to the king’s palace. Asmodeus (or Ashmedai) revealed to Solomon that the Shamir was in the possession of the Lord of the Sea, guarded by a certain bird, a woodcock according to most English versions of the story. Solomon quickly sent off another of his servants who prevailed over the woodcock and managed to steal the Shamir away. From here the story continues, with further twists and turns. You can read a version of the legend in Louis Ginzberg’s classic, “The Legends of the Jews”, as well as a Hebrew version which is available online here (in Kol Agadot Yisrael, ed. Israel Benjamin Levner, Tushiya Publishing).

In Rashi’s commentary to the legend, he deduced that the woodcock was in fact a hoopoe (duchifat in Hebrew, דוכיפת), which became a popular fixture in the legends of King Solomon. But more to the point, he suggested that the Shamir was not a stone or other inanimate object at all, as can be assumed from some of the versions of the legend, but was in fact a living creature—a worm. The source of Rashi’s explanation is unclear, but the phrase “Shamir worm” was born and even made its way into the writings of Mendele Mocher Sforim (Sholem Yankev Abramovic, 1836–1917), who mentions the Shamir as one of the wondrous creatures that Benjamin the Third sets out to find in his travels.

The religious commentators do not agree on whether the Shamir was a living creature or a kind of stone with miraculous powers. On the other hand, based on the Talmud (Tractate Sotah 48b), they determined that after the Temple was destroyed, the Shamir was obliterated from the world. However, about two years ago, a team of researchers in the Philippines discovered a worm capable of eating through limestone. While limestone is a relatively soft form of rock, nevertheless, the existence of a stone-carving worm might not be such an unrealistic notion after all…