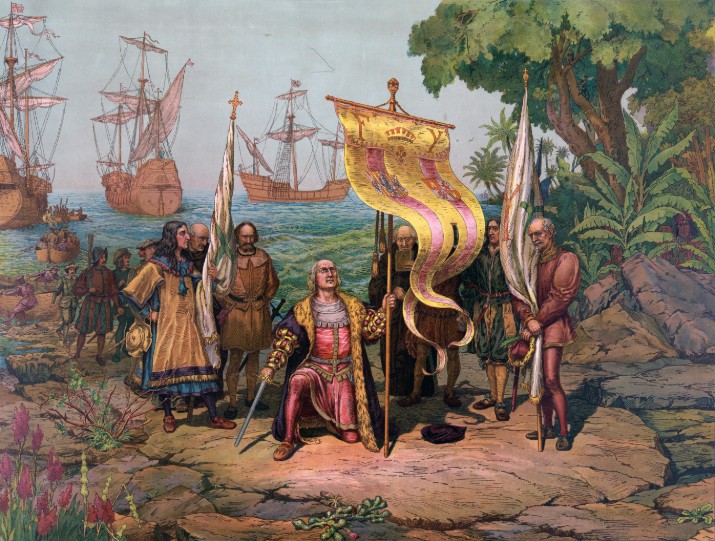 Columbus claims ownership of the New World. Print from 1893.

The rising waves pounded against the holds of the two ships that had embarked on their voyage a month earlier. They were now rocking from side to side and dipping in and out of the chilly waters of the Atlantic. The sailors working topside tethered themselves to the deck in order to avoid being thrown overboard into the depths. In his small cabin, the captain sat at his desk. He had already lost one of his ships, and now he feared for her two sisters. In an effort to stem the bad fortune that seemed to have befallen them, the captain decided to cast lots, in an effort to appease the will of God. Those selected by divine fortune would don traditional religious garb and make a pilgrimage to Santa Maria de Guadalupe.

The lots decreed that the captain himself would embark on the trek to the famous monastery, if they ever made it back to Spain. He thought of his two sons in Cordoba who might soon become orphans, but one fear rose above all others: that word of his astonishing discovery would never reach the ears of the king who had sent him on his important mission in the first place. And so, he dipped his quill in ink, unfolded the piece of parchment, and began writing the story of the long and challenging journey he had begun the previous summer. When he finished, he stamped the parchment with wax and sealed it in a barrel. He threw the watertight barrel into the sea with a prayer that it would somehow reach its intended destination.

The barrel was never discovered, but Christopher Columbus and his crew somehow survived the storm and reached the port of Lisbon several weeks later.

Upon his return to European shores, the captain sent four long letters. First, he wrote to the Portuguese king, explaining the reason for his anchorage in Lisbon while he rested and resupplied for the continued voyage to Spain. Next, he sent a letter to the Spanish monarchs, Ferdinand and Isabella, who had sent him on his journey (and who were responsible for the expulsion of Spanish Jewry just a year earlier). The final two letters were sent to Luis de Santángel and Gabriel Sánchez, key figures in organizing and financing the excursion.

None of the original letters have withstood the ravages of time, but we know of their existence from various sources. Columbus kept a daily log, detailing the voyage westward, his stay in the Caribbean (he believed he had reached the islands east of China and India), and the treacherous return voyage to Europe. In the log, he told of the letter in the barrel that he had cast out to sea. Later in the diary, he noted that he had arrived in Lisbon on March 4th, 1493, and that he had sent his first letter to the King of Portugal.

At one point, the diary was copied for Queen Isabella. But, the manuscript has since been lost. An edited version was composed by Bartolomé de las Casas, the Spanish historian and Dominican friar who gained fame as a social reformer in the 16th century. This version was also lost, and then rediscovered at the end of the 18th century. Until the rediscovery, all that was known of Columbus’ inaugural voyage to the West came from the letters written to Santángel and Sánchez.

In 1989, almost five-hundred years after the epic journey, a copy of a letter composed by Columbus was published. The letter was copied by an unknown source, but it most likely dates back to the 16th century. Some speculate that the copy was based on Columbus’ letter to Ferdinand and Isabella.

The letters to Santángel and Sánchez have been well studied, due to the fact that they were printed a few weeks after they were sent by Columbus. The letter to Sánchez was translated into Latin and titled Epistola de Insulis Nuper Inventis (“A Letter from the Newly Discovered Islands”). It was printed in Rome by Stefan Plannck in May, 1493. That year, the letter was also printed and circulated in Paris and Basel. The Basel copy also features woodblock prints, probably created by Columbus himself.

A short time ago, I received a message from a researcher in England who wanted to know if there was a watermark in a particular book in the National Library catalogue. Watermarks are a type of logo embedded on a page that can identify the paper manufacturer and the period in which it was printed. I found the watermark (a figure in the shape of a dragon or pegasus) and then had a closer look at the book itself.

If this relatively thin book, written in dense gothic letters, had not been an incunable, I probably would not have given it more than a few moments. An incunable is a book printed before the year 1501, during the first few decades following the invention of the printing press. When one of these incunabula comes your way, you give it the respect it deserves. I decided to look into the origin of the title and found that this was a printed copy of the very same Sánchez letter. This rare item had, apparently, reached the National Library in the early 1960s.

The letter began with Columbus summarizing the voyage on which he had been sent on behalf of King Ferdinand of Spain. The printer seems to have forgotten to mention Queen Isabella. This error was corrected in subsequent editions. Another mistake was the misprint of Raphael Sánchez as the finance minister’s name. It was later amended to Gabriel Sánchez.

The letter describes Columbus as having arrived in the Indian Ocean thirty-three days after leaving the Canary Islands. Today we know that it was not the Indian Ocean, but the Atlantic Ocean near the Bahamas. Columbus gave Christian names to the islands and continued on his way. At first, when he arrived on the island of Juana (today known as Cuba), he did not immediately realize that it was an island because of its vast size. When the locals informed him that he had yet to reach the continent, he continued his search until he landed on the island of Hispaniola (today known as Haiti). On arrival, he claimed the island in the name of King Ferdinand.

Columbus described Hispaniola as a veritable paradise, with many rivers, towering mountains, diverse vegetation, fields, birds of song, and precious metals. Columbus went on to record that the residents of the island were healthy and highly-skilled, but easily frightened. Only after the Spanish crew offered them fabrics and other gifts did the residents agree to approach them. In return, the islanders gave Columbus and his team an abundance of gold and cotton. Columbus did not think the inhabitants were idolaters. They believed that goodness came from heaven, and saw Columbus and his crew as angels who came to them in unfathomably large vessels.

The locals moved from island to island in small rowboats. They carried goods to their neighbors on the other islands. They all spoke the same language, and Columbus noted that this could assist the Spaniards in their later attempts to convert the islanders to Christianity.

If Columbus considered the people of Hispaniola frightened and naive, the inhabitants of the nearby island of Quaris seemed particularly violent to him. He wrote that they enjoyed eating human flesh and robbing the inhabitants of neighboring islands. They armed themselves with bows and arrows and allowed their hair to grow long, a direct contrast to the residents of the largest island in the area, whose heads were completely shaven. This island was described as having more gold than any other.

Columbus ordered that a fort be constructed on the island of Hispaniola. There, he left some of his crew with enough food for a year. He added that he had left one of the ships with them (the Santa Maria), but “forgot” to mention that the ship was no longer seaworthy due to the fact that it had run aground while its crew and captain had fallen asleep.

Columbus concluded the letter by praising God for the success of the mission. He proposed the idea of organizing religious festivals to celebrate the discovery of the “lost souls” overseas.

Columbus’ official goal was strictly economic – to discover a shorter maritime route to India. A shorter route would have saved money on long and dangerous commercial excursions to the East. But what did the Spaniards intend to do with the surplus funds? The answer is found in the lost letter that Columbus sent to the King and Queen of Spain upon his arrival in Lisbon.

In the letter, Columbus promised that, thanks to the planned commercial success of his new route, in just seven years time he would be able to finance 5,000 cavalry and 50,000 infantry to embark on the conquest of Jerusalem. He adds, “That was the goal for which I took on this project.” If so, Columbus and the King of Spain planned a crusade to Jerusalem – a conquest unlike any attempted since the 13th century. This startling fact was revealed only after the discovery of the letter in 1989.

With the exception of the First Crusade, which reached Jerusalem in 1099, the conquests that followed all resulted in failure or only partial successes. What would have happened if a Spanish armada, armed with cannons and gunpowder, had sailed to the Land of Israel? One can only imagine, as the plan never came to fruition. Following Columbus’ discovery, the peoples of Europe became captivated with an even more fascinating destination – the New World, America.   If you liked this article, try these: How a Handwritten 12th-Century Manuscript by Maimonides Ended Up at the National Library How Capt. Isaac Benkowitz Saved a World of Jewish Books “Tropical Zion” Revealed