How did a glittering Star of David become the centerpiece of the royal crown and state symbol of a Pacific island nation? What does the Kingdom of Sheba have to do with circumcision? Join us on a journey around the globe as we follow the six-pointed star to the most unexpected of places… 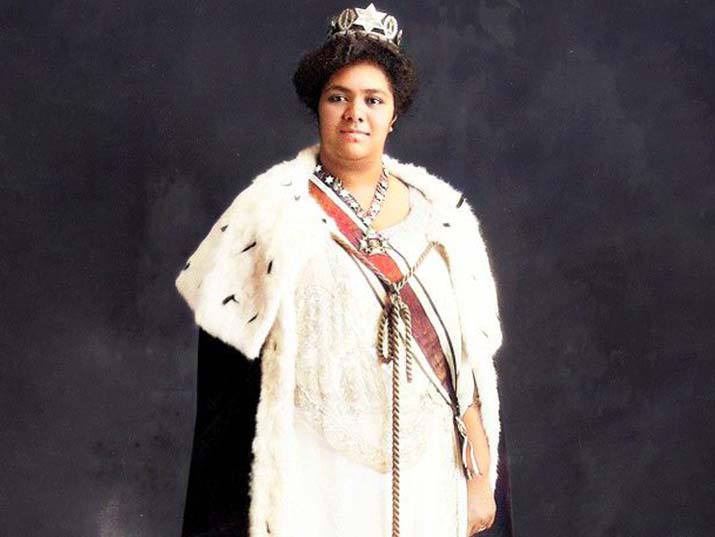 Tonga, a small island kingdom in the southwest Pacific Ocean made headlines in early 2022, when an underwater volcano erupted near its shores causing a tsunami. This was followed by a strong earthquake less than two weeks later. As sometimes happens when a faraway place suddenly appears in the news, our curiosity was piqued, and we wanted to learn more.

What do we know about Tonga? Well, not much. We know it’s an island nation in the South Pacific; that at the Olympic opening ceremony, the flagbearer tends to wear a straw skirt; and that the Disney movie Moana takes place in that general area. The Tonga Islands – there are about 150 of them – are sometimes known as the “Friendly Islands,” a name given to them by Captain James Cook, who chose it, allegedly after having been received on the islands with kindness when he landed his ship there during a major local festival.

The inhabitants belong to the Polynesian peoples that stretch across the islands of the vast Pacific Ocean from Fiji to Hawaii. Admittedly, Polynesian culture, rich with demi-gods and folk tales about such things as the creation of the coconut, is very far from Jewish and Israeli culture. Which is why I was very surprised when shortly after beginning my search for information about this distant kingdom, I came across a very familiar symbol.

A coronation photograph of Tonga’s revered Queen Sālote Tupou III, who ascended to the throne in 1918, shows her wearing a white gown with a ribbon sash across her chest and an ermine fur-trimmed robe in the best European tradition. Around her neck is an elaborate necklace with a pendant in the shape of a cross. However, the most surprising detail of all is her crown, which features at its center the six-pointed Star of David, an ancient symbol not usually associated with the Pacific Islands.

Queen Sālote Tupou III’s 47-year reign (she died in 1965), is the longest of all of Tonga’s monarchs. One could say she was their “Queen Elizabeth.” Yet, unlike Queen Elizabeth II of England, Sālote was famous for her height – she was 6 foot 3 inches tall (1.91 m) – and was dubbed “The Giant Queen” by the world media.

We cannot conclude this episode without relating this little anecdote: During her visit, journalists asked how she came to acquire her perfect English accent, to which Queen Sālote smiled and replied, “What is so surprising? English blood flows through my veins, for, back in the day, my grandfather devoured two English missionaries who had come to our island to spread the Christian faith.”

Returning to Queen Sālote’s coronation photograph, how did this allegedly Jewish symbol find itself in Polynesia, and particularly in a country known to be devoutly Christian since the 19th century? In my quest to find out, I realized that the six-pointed star also appears several times on Tonga’s national coat of arms! At the center is a large white Star of David overlaid with a red cross, while three smaller Stars of David appear at the top left. Some say the group of three stars symbolizes the three main island groups that make up the kingdom. Others say they stand for the three royal dynasties that comprise the current monarchy. The same design also appears on Tonga’s royal flag. What’s more, the Star of David has occasionally appeared on the kingdom’s official stamps and coins.

I wanted to know why Tonga’s people use this particular symbol, but it turns out that in Israel there aren’t many historians who are experts in the history and culture of the Pacific Islands. I tried a different route. I sent my question to the Israeli ambassador to New Zealand who is also responsible for Israel’s relations with Tonga and who just happened to be visiting the islands at the time, but even when he asked his hosts, he couldn’t get a precise answer.

In fact, the six-pointed star appears in many cultures, and is not necessarily related to the Jewish Star of David. The symbol is often displayed as two superimposed triangles, like on the Israeli flag, and it has been known in Eastern cultures for thousands of years, being adopted by the Jews only at a relatively late stage. The historian Dr. Ian C. Campbell, who researched the history of Tonga, told me that the Rev. Shirley Waldemar Baker, a Christian missionary who lived in the Kingdom of Tonga for some thirty years in the late 19th century, was the designer of the above-mentioned coat of arms. Other sources claim a local prince as its creator. In any case, the symbols on it are clearly Western, and likely originated under the influence of external factors, most probably Christian missionaries.

It would appear that the story doesn’t end with the coat of arms. The rose window of the Free Church of Tonga in Nuku’alofa, the nation’s capital, also features a large Star of David, while the highest peak in Tonga is called “Mount Zion.” It turns out that the same missionaries probably introduced additional stories connecting the people of Tonga to the ancient peoples of the Near East, as a way to foster an emotional connection among the islanders with the stories of the Bible.

An English priest by the name of James Egan Molton, who served as head of the Methodist Church in Tonga in the early 20th century, wrote an article claiming that the people of Tonga originated in the Persian Gulf. According to historian Dr. Paula Latu, a native of Tonga, Molton wrote another text that featured the interesting claim that the king of Sheba and his subjects settled in Tonga, Hawaii, New Zealand, Tahiti, and Samoa. The kingdom of Sheba is believed to have been located in the Gulf of Aden, in Yemen or Ethiopia. However,  the missionaries who came to the Tonga Islands, “with the Bible in hand,” likely based their improbable claim of the connection between Tonga and the kingdom of Sheba on Psalm 72, verse 10, in which it is written: “The kings of Tarshish and of the isles shall render tribute;  the kings of Sheba and Seba shall offer gifts.” The Christian missionaries’ imaginations were probably aroused by the mention of the islands in connection with the kings of Sheba and Seba.

The local theologian Dr. Ma’afu Palu expanded on this point. He claims the verse from Psalms deals with gifts that the kings will give to the Messiah. “These are qualities that characterize Tongans everywhere. They are known for their generosity,” he says of the people who, as we recall, inhabit the “Friendly Islands.” “According to this theory, the son of the queen of Sheba abdicated the throne and set sail from the Mediterranean Sea, arriving at last in Tonga,” he says.

According to Palu, the missionaries found additional similarities between the Bible stories and the reality they encountered in Tonga. “The first book of Kings, chapter 22, tells of pagan leaders, whose worship was similar to ours here in Tonga before the spread of Christianity in the 19th century. Furthermore, male circumcision was customary in Tonga from ancient times. The belief was that the same prince of Sheba who – allegedly – started the settlement in Tonga brought these customs here.” On the common local custom of circumcision, Palu adds that the bodies of the kings of Tonga were considered sacred, so they were the only men in the kingdom who were not circumcised.

Clearly, these stories and the Star of David all derive from Christian missionaries who sought to convert the locals by connecting them to the stories in the Bible. The island state enthusiastically adopted these, along with an affinity to the ancient Hebrews, the Star of David, and the name Zion. Nevertheless, besides the mysterious connections to biblical symbols, Tonga and Polynesia also have their own fascinating ancient local traditions with a wide pantheon of gods and myths.

And what of Queen Sālote’s beautiful crown? We still have many questions for which we could not find any answers. We were unable to find any mention of the crown that appeared in the coronation photograph, or when or where it was made. We weren’t able to find out if other kings used it before or since or where it is located today. Perhaps our readers can shed light on additional threads linking the Middle East to the peoples of the Pacific.