In 2012, artist Maty Grünberg decided to revisit his 1984 work, The Bezalel Haggadah – ranked among the finest modern illustrated Haggadot. The resulting volume, The Sister of the Bezalel Haggadah, reveals the artist's creative process, from concept to final print. 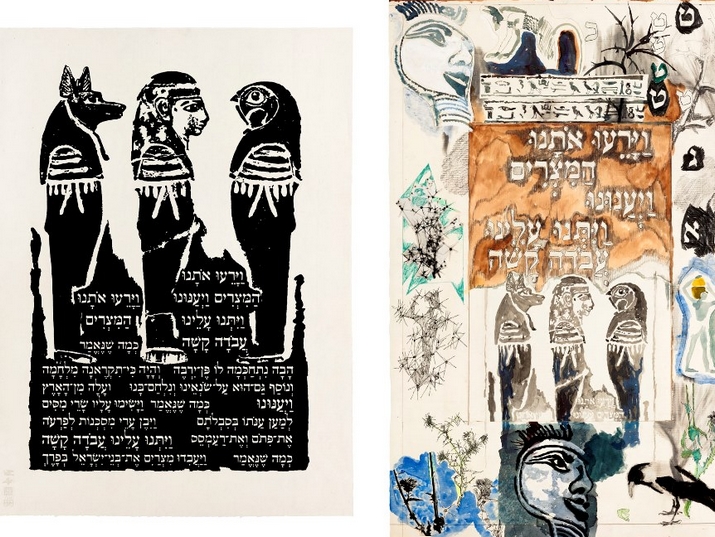 From "The Sister of the Bezalel Haggadah": Grünberg's visual language derived from various sources, including Egyptian art

The National Library of Israel’s collection of Haggadot is considered the most comprehensive in the world, containing more than 15,000 examples from different periods and from across the globe. The collection was recently enriched by a singular new addition: an artist’s proof of The Sister of the Bezalel Haggadah by Israeli artist and sculptor Maty Grünberg, renowned for his limited edition artist books, produced using techniques such as etching, silk screen, and woodcut.

The volume is a companion piece, a “sister”, due to its close relationship to Grünberg’s 1984 Bezalel Haggadah. Considered one of the finest modern illustrated Haggadot, the Bezalel Haggadah has been in displayed exhibitions together with Haggadot by Marc Chagall and Ben Shahn. Copies have been collected by museums, libraries and private collectors.

The “sister” story, however, is about the artistic process. In 2012, Grünberg reviewed his preparatory sketches, and placed them alongside their final versions. The resulting Sister of the Bezalel Haggadah, documents the transformation from early sketch to final print. In this sense, it is also the work of the artist as an older man looking across the bridge of time, revisiting the work of his younger self.

Grünberg is still a working artist whose latest creations – monumental bronze and stone sundials situated in locations like Ascot, UK, the New York Hall of Science, and Teddy Kollek Park in Jerusalem – express a fascination with the passage of time. His most recent was inaugurated on April 7th, 2022, at the Madatech – Israel National Museum of Science, Technology and Space in Haifa. Speaking from his car on the drive up to the ceremony, Grünberg says his motivation for revisiting the Bezalel Haggadah stemmed from an interest in how the process developed.

The story begins following the 1978 exhibition of Grünberg’s Megillat Esther, a boldly colorful volume of silkscreens that drew controversy at the time due to its modern approach. The Jewish Theological Seminary then expressed interest in having Grünberg create a Haggadah, “but they didn’t want a contemporary one,” he says. In the end, the Haggadah was commissioned in 1979 by the Friends of Bezalel Academy of Arts & Design, Grünberg’s alma mater.

The Bezalel Haggadah itself took five years to create. According to Grünberg, the bulk of that time was spent searching for the visual language that would express his view about the creation of the Jewish nation through the story of Exodus from Egypt. His initial sketches for the project were colorful drawings in mixed media. Then something happened.

It was the high point of his search – though perhaps, for the artist, the lowest – a day locked in a heavily guarded room in the British Library in London with the Golden Haggadah (c. 1320-1330). This small but richly illustrated and gilded volume from Catalonia, Spain, is considered among the world’s most famous illuminated manuscripts. Even today, Grünberg says of that encounter, “My hands were trembling. It was the most beautiful thing I’ve ever seen.”

“I was taken to a private room and given white cotton gloves, the librarian came in, rolled a cart in front of her with the ancient book on it, and handed it to me with extreme caution. I was shivering at the beauty of this ancient book. I realized I could not compete with this glorious Haggadah.”

That day, Grünberg decided to change direction, abandon vibrant color, and find another language for creating his Bezalel Haggadah. “I discovered the Prague Haggadah and I switched to woodcuts.”

The Prague Haggadah (c. 1526), the earliest printed Haggadah, featured woodcut illustrations and large, elaborate fonts – now standard elements for Haggadot. The National Library of Israel holds one of the two earliest existing copies of the Prague Haggadah, as part of its Valmadonna Trust Collection; the other copy resides at the British Library.

Now inspired, Grünberg began exploring 19th century woodcut techniques in creating a unique visual language for his Haggadah. “What I like about woodcuts is that it’s very concise,” he says. “Unlike other media, you have to eliminate what is irrelevant.” The inspiration for the images in the Bezalel Haggadah derives from motifs found in synagogues and other sites in Jerusalem, as well as additional ancient Jewish scripts and early Egyptian art.

The resulting volume consisted of 75 pages of original woodcuts printed on handmade acid-free paper, and pulled by the artist on an 1860 Albion printing press. Published in 1984 in a signed, limited edition of 150 copies, the Bezalel Haggadah immediately sold out, acquired by leading institutions such as the libraries at Harvard and Yale, the Jewish Museum, as well as private collectors.

In 2012, twenty eight years after the Bezalel Haggadah was published, Grünberg reopened his files, selected several drawings, placed them alongside the final versions of the woodcuts prints, and began the work on what would become The Sister of The Bezalel Haggadah. The resulting volume contrasts the freehanded concept sketches with their final woodcut print versions – sometimes similar, other times wildly different – to surprising and moving effect.

A decade later, Dr. Yoel Finkelman, Curator of the Haim and Hanna Solomon Judaica Collection at the National Library of Israel, was invited to visit Grünberg’s studio to view the work. For Finkelman, the companion volume represented an exciting opportunity for researchers to understand and track the artist’s creative process: exploration, absorption, interpretation, and expression.

On February 22, 2022, Grünberg presented his work at a modest ceremony held at the National Library of Israel. Finkelman stated “The selection of this volume will enable research on Grünberg’s work, which takes its place in the long tradition of Haggadot, along with the great inspiration and respect for the ancient Haggadot that he examined.”

The Sister of The Bezalel Haggadah was acquired on behalf of the Library through the generosity of Lord Simon Marks of Broughton.