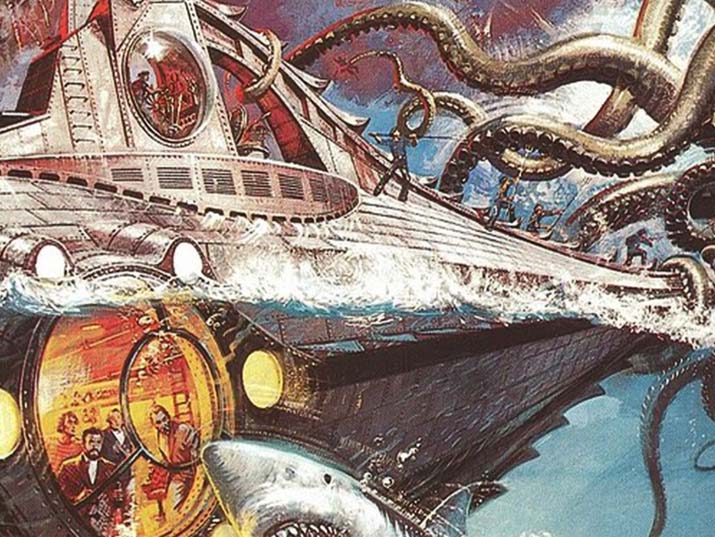 The fictional submarine Nautilus, featured in a Hebrew poster advertising the film 20,000 Leagues under the Sea, based on the book by Jules Verne

Take a moment and imagine Noah’s Ark. Chances are, you are probably picturing a wooden ship of some sort, perhaps with an elephant or a giraffe peeking out of one of the portholes.

But according to the view of a 10th-century Karaite scholar who composed a commentary on the Torah in Judeo-Arabic, Noah’s Ark was much more than a simple wooden vessel filled with animals.

The Book of Genesis devotes only a brief description to the Ark’s construction, consisting of only three short verses (Genesis 6: 14–16). Yet Ya’qub (Jacob) al-Qirqisani, the Karaite scholar in question, goes much further than that. In his lengthy Judeo-Arabic commentary on the Torah, titled Kitab al-Riyad wa-l-Hada’iq, he devoted page after page, in manuscript, to what he imagined was the complex and sophisticated structure of Noah’s Ark.

According to Qirqisani’s interpretation, the Ark incorporated extremely advanced technological innovations, even for his time, including a motorized food distribution system that was able to rotate autonomously (remember, this was the tenth century CE, electricity was nowhere on the horizon!). This system was , in his conception, used to automatically fill the animal troughs. Qirqisani’s Ark was also installed with a sophisticated plumbing system of pipes and waterworks that managed to satisfy the diverse needs of all the various occupants in all three of the Ark’s levels. The commentator also claims that the Ark featured unique methods for allowing in light, but also for preventing water from entering the craft, by means of hundreds of specially glazed windows and doors, some of which even allowed air to enter while still keeping water out.

This is just one example of the new, revolutionary approaches to traditional Jewish texts that we find in Judeo-Arabic works of the tenth century. From around the ninth to the twelfth century CE, most of the Jewish population in the world spoke Arabic as their mother tongue. These Jews, lived in the heart of one of the greatest civilizations of the time, which was a center for innovation in philosophy, theology, science, linguistics, and more. Living in the midst of a rapidly developing scientific world dramatically influenced how they saw and wrote about the Bible. The treasures preserved in Judeo-Arabic Bible exegesis, as well as the fields of exegesis that sprang from this Judeo-Arabic font in later centuries, in places like Iberia, stand witness to this fascinating revolution.