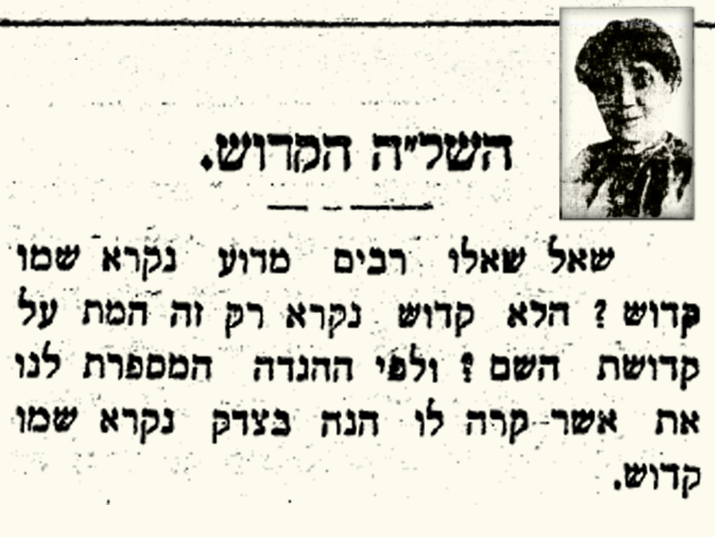 Sarah Feiga Foner née Meinkin (Zager, 1954 – Pittsburgh, 1937) was, as far as is known, the first woman to publish original Hebrew fiction. Between the years 1881 and 1903 she published a novel, two historical-national stories and a memoir about her childhood town Dvinsk in Latvia. In addition to her Hebrew writing, she also wrote a novella in Yiddish, titled Der Froyen Bunt (“The Women’s Revolt”), which she printed on her own, without a date, though she did note the printer’s address in London. On the front cover of Der Froyen Bunt there is a list of the author’s Hebrew publications, which include, in addition to her four known works, an additional story titled “The Annals of the Holy Sh’lah”. This story, which revolves around the Rabbi Isaiah ben Avraham Ha-Levi Horowitz (often referred to with the Hebrew acronymn – “the Sh’lah” – after his main composition, Shnei Luchot Ha-Brit [“The Two Tablets of the Covenant”]), was never found. The assumption was that the author printed it on her own, like the Yiddish novella. 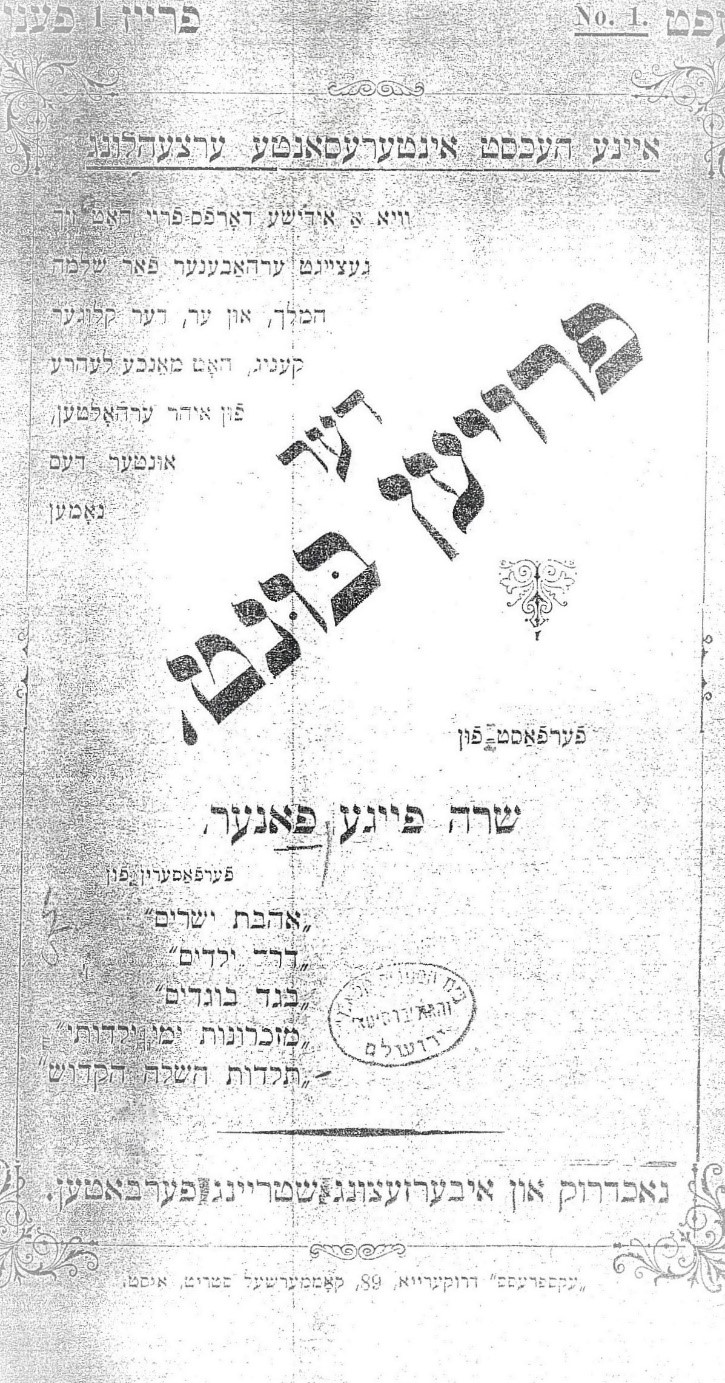 This – until in November 2021 a Hebrew manuscript written in Solitreo (the cursive form used in Ladino) from Ioannina, Greece, arrived at the Manuscripts Department of the National Library in Jerusalem. The manuscript included three copied pieces: one is titled “On the Counting of Years” and consists of a dispute between Yosef Halevi of London and Menashe Grassberg of Trzcianne (near Bialystok, Poland); another includes a story about Rabbi Gershom ben Judah’s boycott of polygamists – this work omits the author’s name, and the third is titled “The Holy Sh’lah” and is attributed to “Sarah Feiga Foner”.

Dr. Yacov Fuchs from the National Libraryof Israel’s Manuscripts Department, who received the manuscript from Ioannina, searched for information about Sarah Feiga Foner and contacted me since I had written a dissertation about her. I was excited to hear about the discovery, but could not read the story since I am not familiar with Solitreo. I hoped to find the source from which the story was copied. The manuscript indicated that the three pieces were copied from “Ha-Yehudi”. A search of the Serials catalog of the National Library of Israel pointed to “Ha-Yehudi: a periodical letter concerning all matters of Jews and Judaism in all the countries,” which was published in London between 1897-1913, under the editor Yitzhak Sovalski. The newspaper’s geographic location and time period fit Foner’s biography, since during the first decade of the 20th century she immigrated from Lodz to London, lived there for a while and in 1909 immigrated to the U.S. with her son Noah.

The National Library of Israel is in possession of the “Ha-Yehudi” back issues, but the newspaper has not yet been digitized for the Historical Jewish Press project. As a result, it is not possible to conduct a quick search for the keywords “Holy Sh’lha” or “Sarah Feiga Foner”. I had to conduct a manual search for the story, page after page. I began the search in 1905, the year when I estimate Foner arrived in London, following the pogroms in Lodz after the failed Polish revolt against the Russian regime. At first I found the dispute over the counting of the years between Yosef Halevi and Menashe Grassberg, which began in late 1906 and lasted well into 1907. Then I found the story about Rabbi Gershom ben Judah, which turned out to be a translation from German by Aharon Leib Bisko for a story by Marcus Lehman. Finally, I located the story “The Holy Sh’lha” which appeared in five installments during 1907. 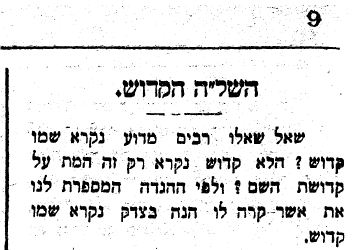 The content of “The Holy Sh’lah” fits well into the transformations which are apparent in Foner’s writing – from an Enlightenment (Haskalah) novel advocating integration into European society and culture to historical-national stories in the spirit of the Revival (Techiya), to childhood memories of daily life in the traditional Jewish community in Eastern Europe. The author’s preference of highlighting a rabbi and Kabbalist who settled in the Land of Israel in the 17th Century and is buried there, confirms her return to the Orthodoxy of her family in her childhood, and her shift to religious Zionism in the vein of the Mizrahi movement.

The search for Foner’s story ended on a pleasant note when I found two ads which appeared in “Ha-Yehudi” early in 1908. In those ads Foner announced that she printed the first part of a story in Yiddish titled Der Froyen Bunt, which she offered for sale from her address in London. As said, in 1909 Foner immigrated to the United States, and no additional ads were found in the newspaper about the subsequent parts of the story. 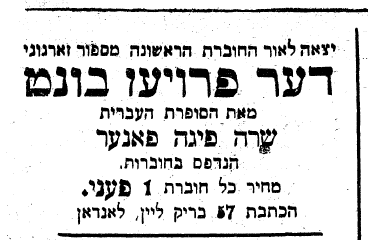 I am grateful to Dr. Yacov Fuchs and all those who took part in discovering the manuscript from Ioannina and sending it to the Central Archives for the History of the Jewish People near the National Library of Israel. Thanks to their conscientious work a new Hebrew story has been added to the corpus of the first Hebrew woman writer. The search for other lost writings by Sarah Feiga Foner still continues. At the top of the list is the second part of the novel “Ahavat Yesharim” which was not published due to lack of funds, followed by a historical story about Don Isaac Abravanel, as well as additional stories in Yiddish.

For further information about Sarah Feiga Foner see the Encyclopedia for Jewish Women.

Michal Fram Cohen works as a seminar paper supervisor at the Open University of Israel. Her book about Sarah Feiga Foner (in Hebrew) is in print by Resling Publishing, Israel.