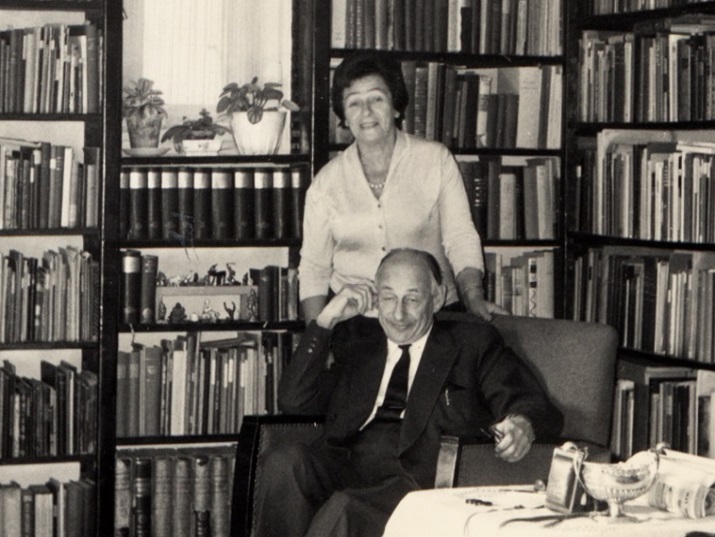 Gershom and Fania Scholem in their Jerusalem apartment

The Gershom Scholem collection at the National Library of Israel is known as the world’s most comprehensive collection of texts on Jewish mysticism, including such sub-topics as Kabbalah, Hasidism, messianic writings and Jewish magic. However, it is worth noting that Scholem did not restrict his book collecting to this field only. His library was much broader and contained books and articles in all the classical fields of Jewish studies: Biblical texts, rabbinic literature, Jewish philosophy and even some halakhic books (especially those noticeably influenced by Kabbalah). Scholem prized this section of his library and thought it should not be separated from the main part. He even addressed this point in a note titled “Regarding my library after my death”:

As regards my library after my death, the university library [today’s National Library of Israel – Ed.] should be aware that outside of my collection on Jewish mysticism there are several comprehensive units on certain topics that should remain together. . . I list here such units in which I invested great effort to assemble. [Details in English]. General Mysticism, Schelling, Meister Eckhart, Neoplatonism, Gnosis, Ancient Magic, Demonology, Witchcraft, Indian Religions, Esoteric Cults in Islam, Christian Mysticism and Christian Cults, Jewish Philosophy through the Generations, Sources and Studies on the Aggadah and Aggadic Motifs, Walter Benjamin.

Indeed, perusing the Scholem collection, one cannot help but be impressed by the wealth of these and other sub-collections, such as German literature, Kafka’s books, Jewish history, the Dead Sea Scrolls, Festschrifts and Yizkor books (memorial books to destroyed Jewish communities). The rich selection of midrashic and aggadic literature includes critical first editions, and in addition to the huge collection of books by Scholem’s friend, Walter Benjamin, the library also contains impressive studies about the famous German-Jewish intellectual. As a side note, I recall that a few years ago a professor of religion from China  who was on sabbatical at the Institute for Advanced Studies at the Hebrew University, would devote a few hours each day to sitting in the Scholem Collection and reading books on Buddhism, Hinduism, Sufism and Confucius.

On the other hand, an occasional peruser of the collection will sometimes marvel at a “basic” book or books that seem to him or her to be “missing” from the collection. Sometimes they even exclaim: “How can it be that Scholem didn’t have . . . ?

The truth is that this approach is fundamentally mistaken, for one must not assume what Scholem did or did not have in his book-filled apartment at 28 Abarbanel Street in Jerusalem’s Rehavia neighborhood based on the books which appear in the collection today. And why is that? In answer, we must consider another note Scholem wrote as an addendum to the 1965 sale agreement of his collection to the Hebrew University.

Books my wife is permitted to keep.

All art and art history books

Midrashim according to her choice

Literature in Hebrew and foreign languages, according to her choice

Books in Jewish Philosophy the Library does not need

Many years ago, at one of the events at the National Library held in memory of Gershom Scholem, an elderly couple approached me and introduced themselves as Jeremy Freud, Fania’s nephew and his wife Dr. Michal Zilberberg. Among the things they told me was that Scholem’s set of Talmud was located in the library of the Israeli Supreme Court! I could not understand the details of their story and was left wondering – why the Supreme Court, of all places? And when and how did the set get there? But more to the point, I decided to try to track down the books and return them to their original home—the Scholem Collection. I immediately called the Court’s chief librarian and asked her to look into the matter. Were the books in fact there? And if so, could they be transferred to the National Library in exchange for another set of Talmud? She promised to investigate the matter, but she came up emptyhanded to my deep disappointment. The physical books were nowhere to be found in the library, and a thorough check of the card catalog and inventory came up blank. Either the couple had relayed to me incorrect information, or I just did not understand what they had told me. I did not give up and consulted some of the Scholem Collection experts, but no one had any idea about it. Sadly, I decided to give up the search and forget about it.

That was . . . until a few months ago, when out of the blue I received a phone call from the Supreme Court’s current chief librarian, Talia Zonder. (I had spoken with the previous chief librarian, whom Talia had recently replaced.) She told me (without her having any prior knowledge of the above story) that Scholem’s set of Talmud is in the private chambers of one of the Supreme Court justices located in the Supreme Court building. The judge was about to retire (she would not tell me who), and would like to donate the set to the Court library. Immediately, I understood that what Fania Scholem’s nephew told me years ago had indeed been true, but just somewhat inaccurate. Indeed, Scholem’s set of Talmud was at the Court, but not in the Court’s official library, which explains the fruitless results of my search. At any rate, she continued, the Court library had no interest in keeping the set, especially since it was not in good condition and was in need of rebinding. She then asked whether the Scholem Collection would be willing to take the books!

I imagine you already know my answer! Eagerly, I filled her in on the entire story, and said that we would be delighted to receive the set, subject to the approval of Dr. Yoel Finkelman, the National Library’s Curator of Judaica (who of course immediately agreed). The next step was for the librarian to obtain the judge’s consent to donate the Talmud to the National Library. After some time, the judge agreed. At that point, I involved the Library’s Receiving Department to organize the transfer of the set of Talmud to the Library and its repair. After some more waiting, the coveted books at last arrived. Unfortunately, I then discovered that the set was incomplete, some volumes were missing. Nevertheless, it is indeed the set of Babylonian Talmud that belonged to Gershom Scholem (printed in Vilna in 1921, without the commentary of Rif [Rabbi Isaac Alfasi]), as one can see from Scholem’s stamp on the title page.

And finally, we can at last divulge the identity of the judge who donated the set…

It is retired Supreme Court Justice Elyakim Rubenstein, who served as Vice President of the Supreme Court and before that as Attorney General as well as Cabinet Secretary. Rubenstein, who was apparently a close friend of Fania Scholem’s nephew, had received the set of Talmud from them as a gift, and made sure to record this fact in each and every volume.

The set is now undergoing disinfection. It will then make a few more stops—including rebinding and cataloging — after which it will reclaim its natural place among the books of the Scholem Collection. Researchers will be able to browse the pages and their margins in search of Scholem’s comments, which he famously jotted down alongside his thousands of texts and which often contain hints of links to other, related works. Perhaps yet another aspect of Scholem’s multifaceted personality (Scholem the Talmudic scholar?), will be revealed to us…