The Age of Discovery as Reflected in Antique Maps

The Age of Discovery led to the broadening of human knowledge about the geography of the world we live in and landscapes and peoples in faraway regions in America and Asia. These discoveries are reflected in antique maps preserved in the National Library 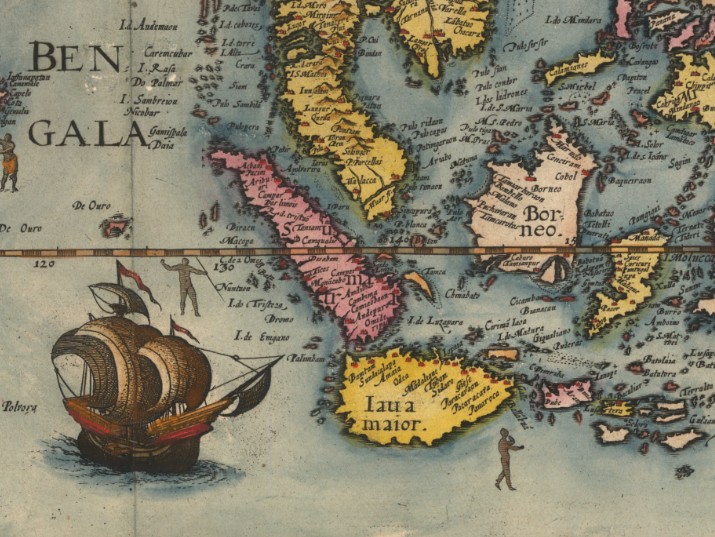 This year marks the 500th anniversary of the death of the famous explorer Ferdinand Magellan. His voyages in the service of the Portuguese and Spanish crowns led to the discovery of sailing routes and parts of the world that were previously unknown in the West. It is possible to trace Magellan’s travels and discoveries as well as the knowledge accrued by other travelers and researchers during the Age of Discovery by studying the antique maps preserved in the Eran Laor Cartographic Collection at the National Library of Israel.

Gregor Reisch’s unique world map from 1503 is one such interesting example. The basic format of the map follows the famous Ptolemy world map, which includes the ancient world that was known to geographers before the Age of Discovery. 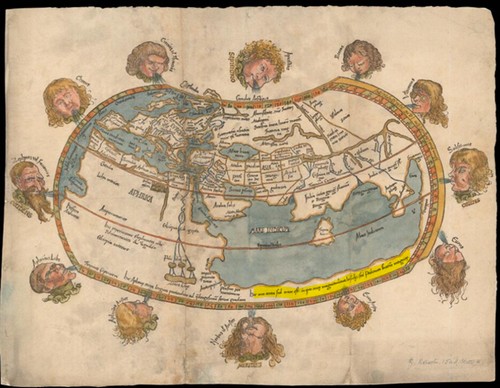 However, at the bottom of this map, on the land bridge linking Southeast Asia to Africa there is an inscription (marked in yellow): “Here there is no continent but a sea with islands that were not known to Ptolemy.” This is the first ever reference on a printed map hinting at Columbus’ discoveries and his belief that he had discovered islands off the coast of Asia.

This is also the first time that the winds are depicted as individualized, stylized faces (and not as cherubs as had been the practice until then); one of the winds is even wearing spectacles, the first printed representation of their use. 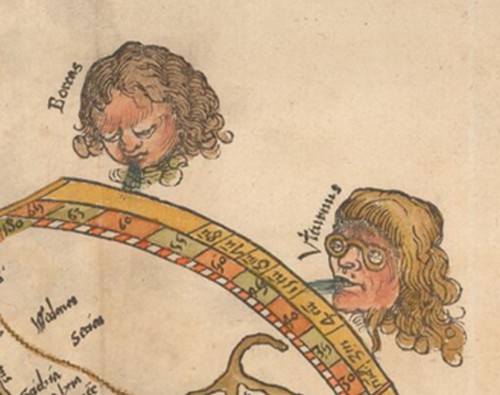 As everyone knows, one of the most significant finds of the Age of Discovery was Columbus’ discovery of America in 1492. In the first decades after Columbus’ voyage, the continent was referred to on maps as the “New World”:

A New Description of America the New World, 1570 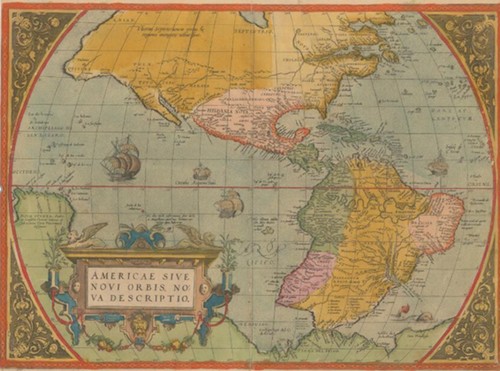 This map of North and South America from 1596 titled “America the New World” includes the figures of explorers Columbus, Amerigo Vespucci, Magellan and Francisco Pizarro, along with the year of their voyages, as well as depictions of ships, an anchor, and navigation tools such as compasses and maps. 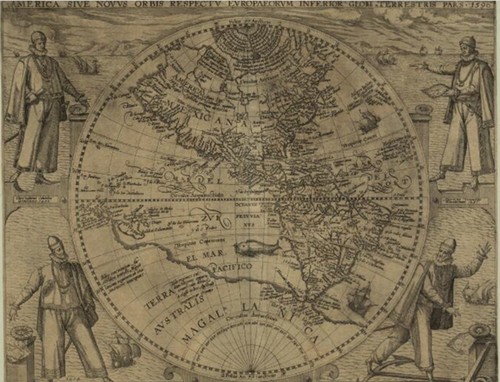 The Clover Map, 1585, presents the continents of the ancient world in the shape of three clover leaves, with “America the New World” in the lower left corner. 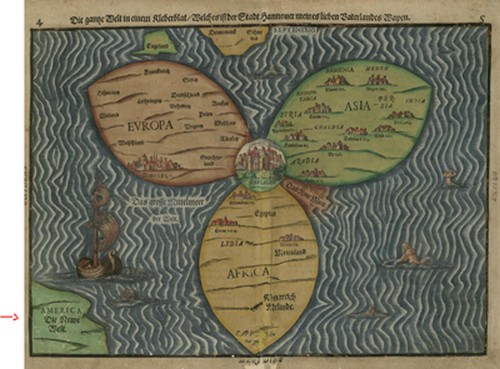 This map represents the old and the new. On the one hand, it presents the three continents of Europe, Asia and Africa as well as the religious motive behind the map’s creation, with Jerusalem at the center and the city of Rome – the seat of the Pope – also highlighted.  On the other hand, the map also features the “new” geographical reality – the discovery of the continent of America.  Although the book from which the map is taken deals with sacred literature, the author felt he could not ignore the new discovery and decided to include it in the map.

The first map appearing in the atlas is a world map that includes America. A caption in the southwestern part of the map refers to Magellan’s discoveries.

The second map in the atlas is entitled “America the New World.” 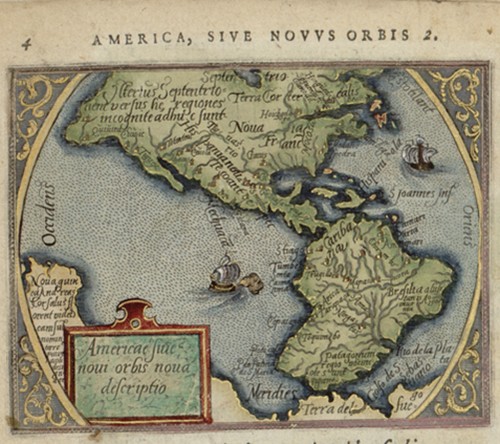 This meticulously hand-painted pocket atlas makes use of gold leaf to give it an impressive, high-quality finish. 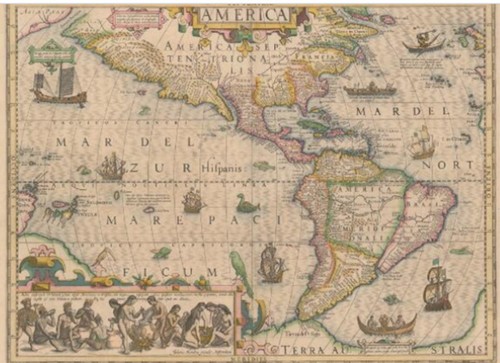 The map features the captions Nova Francia, (today—most of the Quebec region in Canada) and Nova Hispania (today—the central United States and the countries of Central America). With the discovery of these new lands, the European powers were quick to take control of the territories and exploit them for their own needs.

The Europeans who came to South America viewed the indigenous peoples of the new continent with curiosity and they adorned the maps with illustrations depicting the daily lives of the natives. Here, indigenous people in Brazil make an alcoholic beverage from the manioc root (fermentation of the plant root involves a process of cooking, chewing and spitting).

Hunters and fishermen in boats: 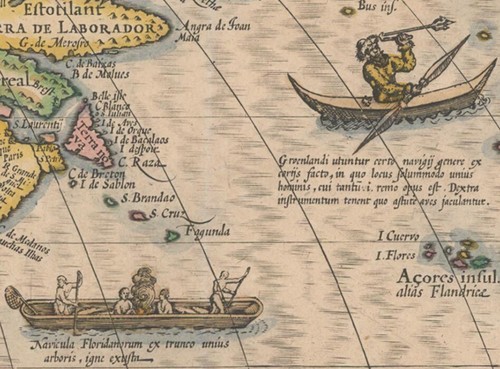 This picturesque map includes both local and mythological fauna. In the sea, we can see a flying fish and a sea monster, and along the bottom frame, the map’s illustrator includes birds native to South America. 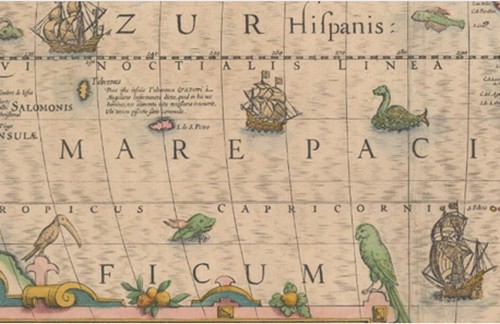 The explorers were not always able to accurately determine the nature of their discoveries in real time. An example of this is the representation of the Baja California Peninsula:

Map of North and Central America, 1669, with the incorrect identification of the Baja California Peninsula as an island.

One can see that the shoreline is mapped in relative detail, while the interior is mostly empty because the cartographers did not yet have the time to study it and map it accurately. Illustrations of animals typical of the area do appear on the map. 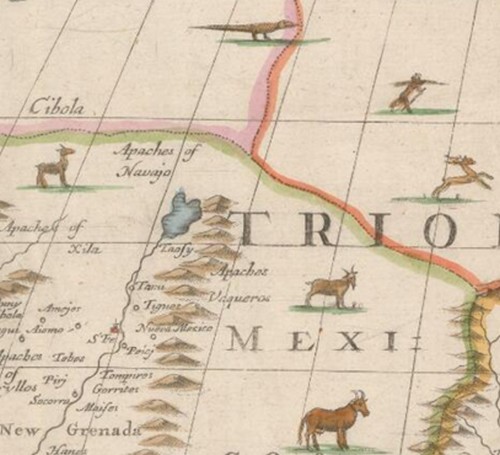 This world map from around 1580 includes an inscription referring to Columbus and the date of the discovery of America, 1492, as well as the inscription “America or New India.” This inscription matches Columbus’ belief that he had reached India (this is the origin of the term “Indians” for the indigenous people of this continent).

In the illustrations on the map in the south and the areas of the oceans, the indigenous peoples engaged in fishing and hunting using spears and bows are depicted half-naked. On land, in the north, most of the figures are clothed. 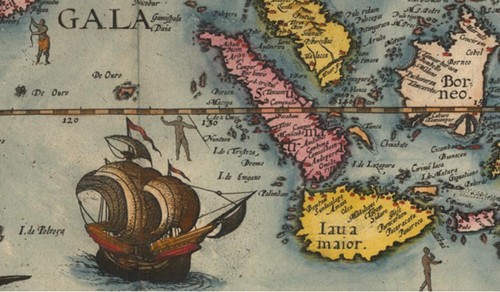 Map of the region of the Philippines, 1595, pointing south. The map features illustrations of animals and a European ship. 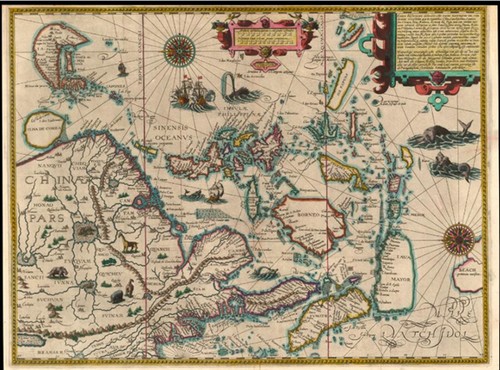 The areas of China on the map include beautiful illustrations of animals that contemporary Europeans were unaccustomed to seeing: 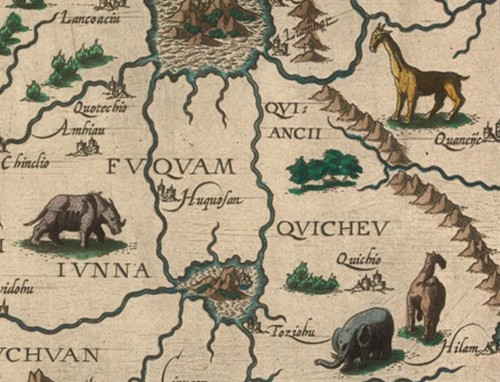 In 1519, Magellan’s ships passed from the Atlantic to the Pacific Ocean through what would later be named the Strait of Magellan. 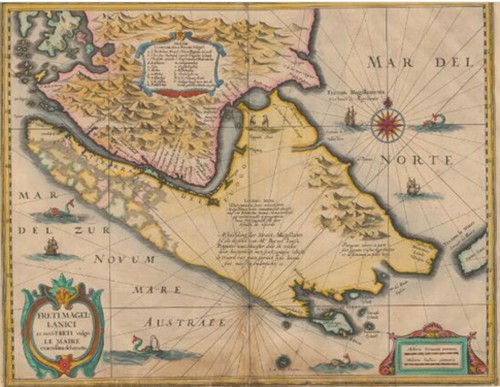 Next to the strait is a pair of penguins standing in the territory of Chile. 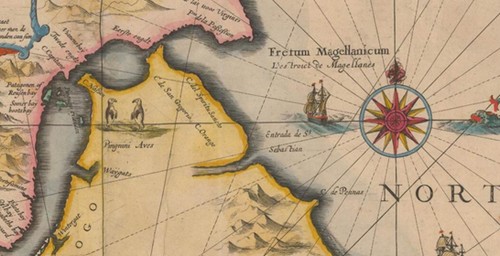 A Portolan chart from Blaeu’s Atlas, 1663, includes markings of the sailing routes in the East Indies and Philippines and illustrations of European ships. 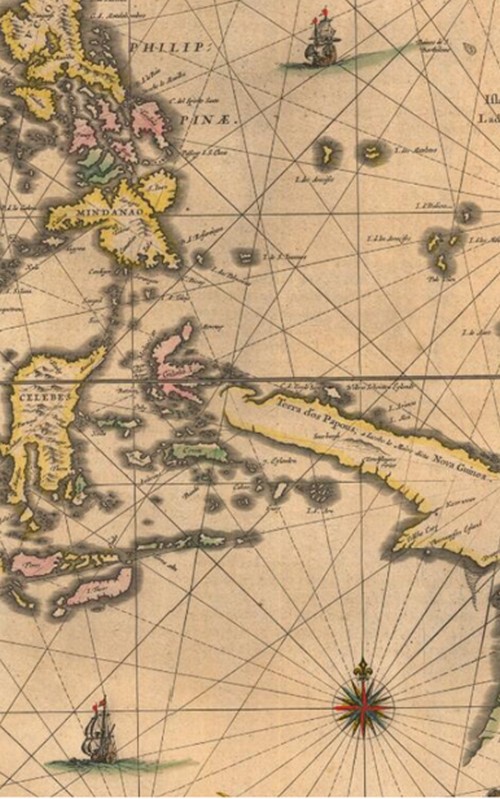 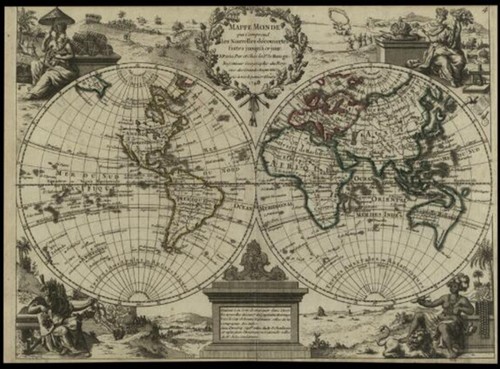 The illustration below shows an example of a newly discovered land in which farmers gather crops in the fields, packed goods await shipping, a hunter shoots an arrow from a bow, while ships sail in the background. 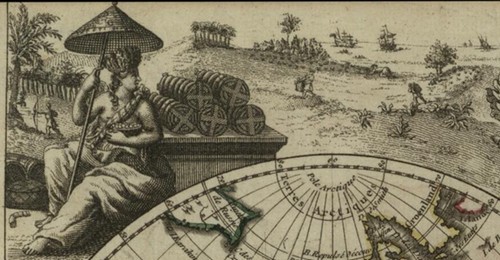 And here we see the deserts of Africa, and a figure with a lion.

Map of the region of Polynesia and Australia, 1790. The map includes markings of the sailing routes of explorers such as James Cook (who was the first European to reach Eastern Australia) and Abel Tasman (after whom Tasmania was named) who discovered New Zealand. 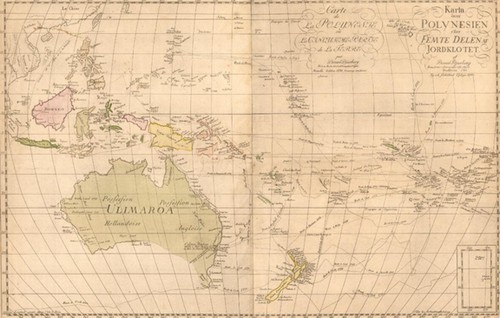 Australia is called Ulimaroa—the name given to it by a Swedish geographer, which remained in use in European maps for about four decades. 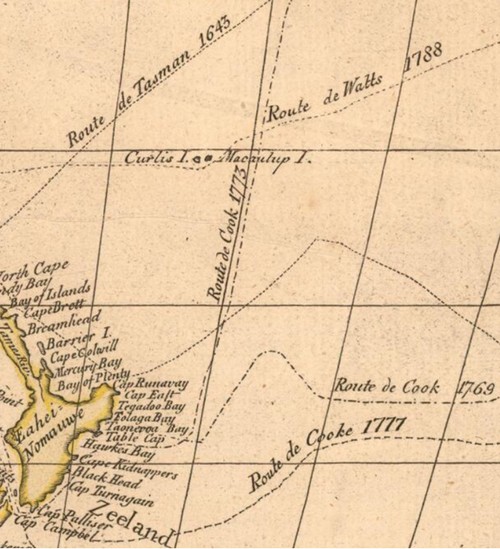 The northeast region of New Zealand with Cook’s and Tasman’s travel routes and the years of their journeys.

Map of the region of Australia and Polynesia, 1796, with the caption “New Holland” for Australia. This was the period when the Netherlands was one of the leading powers in maritime trade and shipping, and the area of Western Australia was under Dutch ​​control. 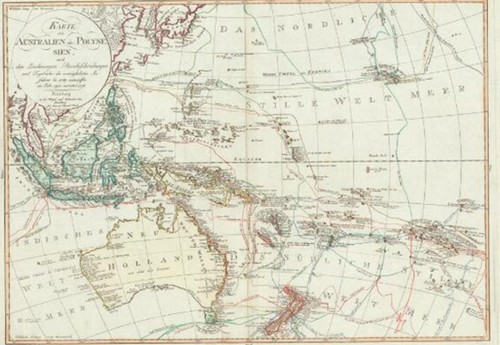 This map too, features the sailing routes of navigators and explorers, including their names and the dates of the voyages.

Magellan’s discoveries and the new findings of the Age of Discovery are reflected in these picturesque antique maps that offer evidence of a changing worldview in light of the new discoveries and the scientific innovation in the fields of navigation and cartography. The maps document not only the new continents, but also the landscapes that were so unique to the Western eye. Today they still offer the viewer an experience that is both aesthetic and educational.

You are welcome to continue browsing the Eran Laor Cartographic Collection– on the National Library of Israel website.