101 years after it was written, "The Kiss" by preeminent Hungarian Rabbi Immánuel Löw has finally been translated into English 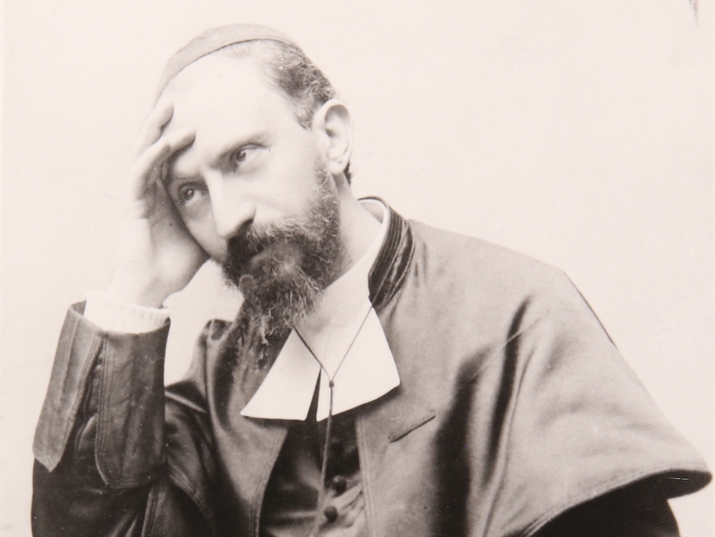 Exactly 101 years ago, on Friday evening, April 23, 1920, the community members of the Neolog Jewish congregation in Szeged, Hungary waited for Chief Rabbi Immánuel Löw in vain in front of the city’s New Synagogue.

On that very day, he was imprisoned for fourteen months based on false accusations.

While still in prison, he began writing his masterpiece, Die Flora der Juden (The Flora of the Jews), in which he describes the flora that appear in the Torah, the Talmud, and medieval Jewish literature. Another result of his imprisonment was that he expanded an earlier essay of his, written on the topic of the kiss. He wrote the first version of Der Kuß (The Kiss) — a significant work in folkloristics — in Hungarian in 1882 for the wedding of his friend, and published it in only thirty copies.

It describes the topic of kisses and the act of kissing in Jewish and non-Jewish literature.

When Immánuel Löw was detained, his son, Lipót Löw (named after Immánuel’s father, who is regarded as perhaps the most important figure in Neolog Judaism) was allowed to send some of his father’s scholarly work to the prison.

Lipót recalled this moment in his unpublished memoir:

“When I was finally able to deliver materials for his scientific research to the prison cell for the Ministry of Justice, I first had to choose between the materials of two of his studies: Der Kuß (The Kiss) and Tränen (The Tears). I chose the first one. An outsider could not know what said content in the cell’s solitude could trigger in the prisoner.”

It was only due to his son’s decision that Löw was thus able to extend the essay he had written almost forty years previously to fifty-one pages and translate it into German. The editors at the Monatsschrift für Geschichte und Wissenschaft des Judentums (Monthly Magazine for Science and History of Judaism) even had to add the following sentence to the first part of the publication in 1921: “For special reasons, the author was unable to read the second proof of this article himself.”

In The Kiss, Löw gives a comprehensive and multi-faceted overview of the cultural history of the kiss, written in an easy to understand and even enjoyable style. Löw describes the act of kiss as a motif and the phenomenon of kissing from linguistic, anthropologic, religious, historical, legal, folkloristic, eschatological and even poetical points of views. He used various sources from a variety of cultural contexts.

The knowledge that permeates his work is fascinating — especially knowing that the circumstances in which he worked on the extended version of The Kiss were anything but ideal.

Despite their historical, cultural and literary value, Löw’s works are almost non-existent in English. To fill this gap, and to preserve the work of this invaluable figure of Hungarian Jewish thought, in the autumn of 2019 we decided to translate The Kiss from German to English.

Throughout the translation process, we strove to create a text that would be easy for a 21st century reader to follow. The bulk of the translation was done during the first wave of COVID-19 and, without the option of physically accessing any of the relevant major libraries, we were forced to do all the necessary background research using only online, digitized collections and email correspondences. The first volume of 1824’s  Geist der pharisäischen Lehre (The Spirit of Pharisaic Teaching), for example, could only be accessed through the National Library of Israel’s Digital Collection.

Löw cited his references only in abbreviated form. The original edition lacks a bibliography and also a list of abbreviations — likely due to the circumstances in which he worked on the piece. Löw composed this work for the readership of Monatsschrift für Geschichte und Wissenschaft des Judentums where he often published articles on various topics. We therefore have to assume that at the time The Kiss was published, his audience was familiar with both the references and their system of citation. With backgrounds in Jewish studies, classical philology, history and the study of religions, and as a result of an extended research process, in most instances we were able to reconstruct which editions Löw would have used when writing this extended version of The Kiss.

Whenever Löw gave volume/page numbers, we looked for the exact edition in which the page number matches with the one mentioned by Löw. Librarians and fellow researchers will certainly be able to identify with our happiness and pride in successfully deciphering a number of these abbreviations, such as Ritter X 258, Goldziher Islam 253 (with the note that Ignaz Goldziher had several works containing the word Islam in the title) and Homil. 30. We plan on sharing the solutions to some of these riddles on our instagram account @szegedjewisharchives.

Though some of the volumes from Löw’s library survived and can now be found in the National Library of Israel collection, the library catalogue was lost following the tragic events of 1944–1945, making it impossible to confidently identify all of the works, sources or editions he referred to in the original text.

Some thirty years after Löw’s 1944 death, a number of his writings, including The Kiss were republished by Alexander Scheiber in Studien zur jüdischen Folklore (Studies in Jewish Folklore). Löw officiated as chief rabbi of the Szeged Jewish community for 65 years and many documents relating to his time there and the community more broadly have recently been digitized and indexed, and are available online via the Szeged Jewish Archives.

The Immánuel Löw Archive is safeguarded among the National Library of Israel collections in Jerusalem.