József Braun was Footballer of the Year and top scorer in his native Hungary, but those that saw him star for the national team couldn't have guessed that his life would come to a tragic end in the Holocaust 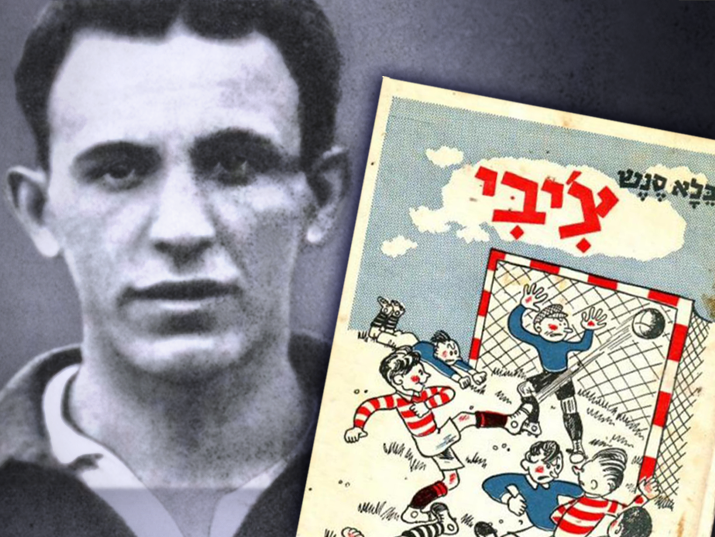 Even those that knew him beforehand would have struggled to recognize the frail figure dressed in the uniform of a forced laborer – thin rags that did little to defend against the harsh weather conditions of the Russian front during the Second World War. But if they looked closely, or happened to hear his name, they likely would have known exactly who he was. Some might have even read the book he inspired: Csibi, written by one Bela Senesh (Szenes).

Senesh was none other than the father of Hannah Senesh, the iconic Hebrew paratrooper and poet who was captured and killed during a daring WWII mission behind enemy lines. Well before that, however, Bela Senesh was a fairly well-known playwright and journalist in Hungary, though Csibi became his most famous work. The book was extremely popular in Hungary during the 1920s, and in the 1950s it was translated into Hebrew by Avigdor HaMeiri.

The plot tells of a fatherless boy, who grows up in a poor working-class neighborhood before being sent to a school where the children hail from more privileged backgrounds. At first, the other children tease him because of his poor upbringing. “Those poor people, they’re unclean by nature”, his classmates remark, while deciding to shun and ignore the boy, fearful that such a person “might suddenly draw a pocketknife and stab us in the back”. They also label him with the derogatory nickname “Csibi” – a word meaning “street urchin” in Hungarian.

Yet over the course of the book, the boy, Istvan Horovecz, displays his virtues and personal integrity, and eventually manages to win over his classmates with his talent on the football pitch. Bravely enduring his classmates’ various pranks and taunts, [SPOILER ALERT] Csibi finally helps his school win a prestigious tournament, and the epilogue tells of how he eventually becomes an international soccer star and later even a doctor. The book became an instant classic for young readers in Hungary.

Though the Jewish connection is not specifically mentioned in the book, the clues are sprinkled throughout. For example, on Csibi’s first day at school, his teacher pronounces his last name as Horovicz instead of Horovecz. The name “Horovecz” with an “e” was adopted by many Jewish families who sought to make their origins less obvious by choosing a more “Hungarian”-sounding name. Csibi’s assimilation into Hungarian society reflected Bela Senesh’s own beliefs regarding the importance of Jewish assimilation.

So who was the original “Csibi”? The inspiration for Bela Senesh’s book was József Braun, whose story is similar to that of quite a few European athletes of the period: They were Hungarians, Germans, Austrians and so on, but for many of their neighbors and acquaintances, they were Jews, first and foremost. In Hungary in particular, many Jews in the late 19th century and early 20th century began turning to a relatively new sport – football. Sports were a path that offered integration into society, a vision that appealed to the young József Braun.

Born to a middle class family in Budapest in 1901, Braun began playing soccer despite his father’s disapproval, and his talent shone even at a young age. At age 13 he was playing with older children and still managing to stand out. In 1916 Braun was invited to join MTK Budapest, one of the biggest clubs in the country, after the coach happened to see him playing in a local park. By coincidence, MTK was actually known as something of a “Jewish” team – aside from the club’s Jewish president, a number of prominent Jewish players also starred for the club, including Béla Guttmann, Gyula Mándi and Henrik Nadler.

Braun, who was nicknamed “Csibi”, played on the right wing, and was an extremely impressive player. Israeli sports journalist Ronen Dorfan has described Braun as someone who was capable of carrying out all of his tasks on the pitch with perfect precision. He was incredibly quick, with excellent ball control skills as well as an eye for goal. Braun won nine Hungarian league titles with MTK as well as two Hungarian Cups. Aside from his achievements at club level, he also starred for the Hungarian national team, scoring eleven goals in twenty-seven international appearances. Dorfan explains that in the context of international soccer in the 1920s, this was a relatively high number of appearances. Braun began playing for Hungary at the age of 18, was Footballer of the Year in Hungary in 1919 and also participated in the 1924 Olympic Games.

Unfortunately, Csibi’s football career came to an end in early and abrupt fashion. At age 20, Braun had already suffered a difficult injury from which he was able to recover, but in 1926, when he was only 25, Braun was forced to hang up his boots after yet another major injury. While he did attempt a comeback in the late 1920s with two American teams (including the Jewish club Brooklyn Hakoah), Braun soon put a final stop to his brief and illustrious career, at an age when most soccer players are in their prime.

During the 1930s, Csibi tried his hand at coaching, spending a few years managing Slovakian club Slovan Bratislava. In 1938, however, with antisemitism on the rise, Braun was forced to return to his native Hungary.

Soon came World War II, with Hungary entering the war in 1941 as a member of the Axis. Braun, who was around 40 at the time, was forced to join one of the Hungarian army’s labor battalions, like many of his fellow Jews. These were, in effect, forced labor organizations, with the prisoners, mainly Jews, required to dig trenches and build fortifications on the war front, while completely exposed to Soviet gunfire.

Braun was sent to the eastern front, and was not among those fortunate enough to survive. Csibi, the international soccer star, died of hunger and exhaustion after two years of forced manual labor in subhuman conditions.

Today József Braun’s name is nearly forgotten in Hungary. Something does remain though – the children’s book which bears his name, as well as the author’s hope of assimilation into Hungarian society through football and sport. Unfortunately, we are all too aware of what became of that hope, as well as the tragic fate of Bela Senesh’s daughter.