His Sugar Cube Vaccine Beat Polio. Then He Took a Shot at Middle East Peace

Albert Sabin may be less famous than Jonas Salk, but he probably shouldn't be 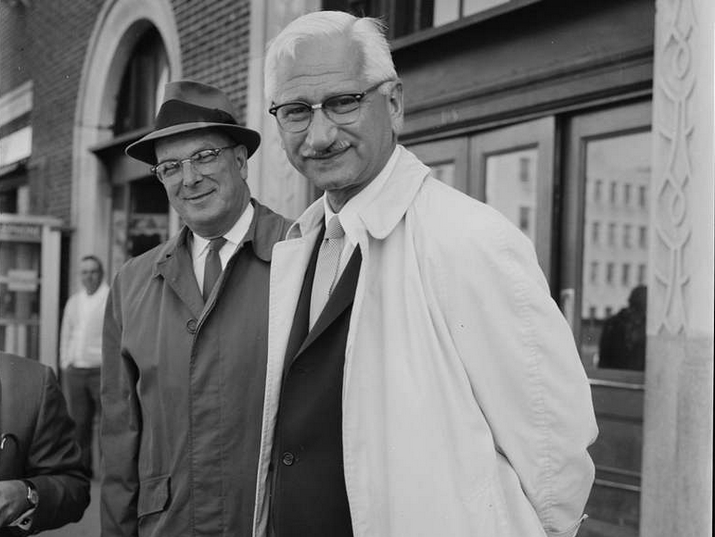 "A scientist who is also a human being cannot rest while knowledge which might be used to reduce suffering rests on the shelf." (Photo: Albert B. Sabin, 1962. From the Boston Public Library collection)

Jonas Salk is rightfully credited with developing the first safe and effective polio vaccine, yet his inoculation was not the one that ultimately brought about the near total eradication of the terrible infectious disease known as “poliomyelitis” or “infantile paralysis”.

Salk’s vaccine, administered by injection, was first approved and widely distributed in the United States in 1955.

Around the same time, another Jewish medical researcher named Albert Sabin was busy developing a different type of polio vaccine – one which could be administered orally and provide significant benefits over Salk’s vaccine, including cheaper production costs and longer-lasting immunity from polio without the need for “boosters”.

An oral vaccine, as opposed to an injected one, also meant that it would be much easier and more practical to use for massive inoculation drives, especially in poorer countries and regions where sterile syringes were not readily available.

Sabin’s vaccine used a weakened “live” polio virus, as opposed to the “dead” virus used by Salk. This made it theoretically more risky, yet with the benefits far outweighing the risks, the Sabin vaccine largely replaced the Salk vaccine worldwide from the early 1960s.

Salk’s vaccine has remained in use and was certainly a critical breakthrough in terms of dramatically reducing the debilitating infectious disease’s prevalence, yet for most of the second half of the 20th century, the oral vaccine developed by Sabin is what facilitated the nearly complete global eradication of polio.

Neither of the men ever attempted to patent their discoveries, seeing it as their privilege and purpose in life to help save millions of people from polio and other ailments.

On the day his vaccine was declared safe and effective for use, Salk was asked who owned the patent. He famously retorted, “Well, the people, I would say… There is no patent. Could you patent the sun?”

Sabin once quipped, “A scientist who is also a human being cannot rest while knowledge which might be used to reduce suffering rests on the shelf.”

From immigrant to global hero

Born in Bialystock in 1906, Albert Sabin moved with his family to the United States in 1921, fleeing the poverty and violent anti-Semitism of their native Poland. Shortly after receiving his medical degree ten years later, Sabin became specifically interested in studying polio.

His research into polio and other ailments continued throughout the 1930s and 1940s. As a high-ranking officer in the US Army Medical Corps during World War II, Sabin traveled the globe studying viral diseases, even developing vaccines for some, including dengue fever and encephalitis.

After the war, he settled back into civilian life and his research on polio. Determined to better understand the polio virus, Sabin and his colleagues performed autopsies on everyone who died of poliomyelitis within a 400 mile (650 km) radius of his home in Cincinnati. Sabin and his team discovered that the poliovirus was found in the intestinal tract – meaning that an oral vaccine could theoretically be developed for it.

As the Salk vaccine had already been widely administered in the United States by the time Sabin’s was ready for trial, he had to test it somewhere else.

Like Salk, Sabin first tested his vaccine on himself, though he would need a much larger scale to prove the vaccine’s efficacy.

For that, he reached out to a most unlikely partner: the Soviet Union, then in the midst of a bitter Cold War with the United States. Nonetheless, the dream of eradicating polio trumped geopolitical tensions.

Massive trials on children in the Soviet Union (as well as other locations around the world including Cincinnati) proved the vaccine’s safety and effectiveness. The fact that it could be administered via sugar cube made it even more appealing.

Sabin and his successful vaccine were feted across the globe, as it became clear that the seemingly unlikely American-Soviet collaboration had helped bring the eradication of polio nearer than ever. He received a prestigious medal from the Soviet Union at the height of the Cold War.

Ultimately, the vaccines developed by Salk and Sabin led to the almost inconceivable decrease in global wild poliovirus cases from millions annually in the 1940s and 1950s to well under a thousand by the dawn of the new millennium.

At a public event in Chicago in 1966, he encouraged President Johnson to listen to the Midrashic teaching that “mighty are those who can convert an enemy into a friend,” warning that “competitive military confrontation” would only lead nations “to annihilate themselves”, and that “if we do not learn cooperation on an international scale in the next 25 years we will not survive.”

Following the Six Day War in 1967, Sabin chaired an organization called American Professors for Peace in the Middle East (APPME), which soon boasted thousands of members from hundreds of campuses across the country. APPME promoted the idea that regional peace was possible and must be pursued, and called for direct negotiations between the concerned parties.

In 1968, Sabin led an APPME fact-finding mission to the region, meeting with leading political and intellectual figures in Jordan and Egypt primarily “to determine whether there has been sufficient change in attitude toward the existence of a viable Jewish state in the Middle East to provide meaningful approaches to a durable peace that would benefit the Arab people as much or more than it would the Jews in Israel.”

For its commendable task, the delegation concluded their trip disillusioned, coming to the “terrifyingly sad conclusion” that there had been no sufficient change and consequently there were no new “meaningful approaches” to the durable peace they sought. There had been no “agonizing re-appraisal” of the situation following Israel’s “astonishing victory” in 1967, which, they concluded, had “achieved… a reprieve from the immediate and greatest threat to its survival, but no prospects for peace…”

They even gave their final report a depressing title: “The Arabs Need and Want Peace, But – Impressions and Conclusions of the Mission of American Professors for Peace in the Middle East to Jordan and the United Arab Republic, June 24 to July 5, 1968”.

Of course being an expert in infectious disease does not necessarily make one qualified to solve the Middle East conflict, but the mission’s conclusions do seem especially prescient in hindsight, as the War of Attrition raged and the Yom Kippur War would rock the region once again just a few years later.

Two years after the APPME report, Sabin publicly warned a different American delegation that Egyptian and Jordanian acceptance of the US-proposed Rogers Peace Plan was a disingenuous “tactical move in order to restore the pre-1967 borders and leave Israel vulnerable again.”

He often looked to Israel as a model for the world – a country he saw as being built from nothing by people willing to sacrifice of themselves for the common good.

Sabin was often honored by organizations for his contribution towards the eradication of polio. He frequently spoke at fundraisers for Israeli and Jewish causes.

In 1962, the “Dr. Albert B. Sabin Children’s Woodland” was named in his honor in the United States Freedom Forest outside of Jerusalem.

He became president of the Weizmann Institute of Science, Israel’s preeminent scientific research center, in 1970.

Sabin’s tenure at Weizmann concluded about a year prematurely, though, when he stepped down at the end of 1972 following open heart surgery. After moving back to the United States, he continued to lecture, pursue his own research and areas of personal interest.

Though his most well-known accomplishment was helping to all but eradicate polio, Sabin’s words and actions showed a commitment to bettering humanity that far transcended the field of infectious disease.

Later in life he became particularly interested in solar energy, and shortly before he passed away in 1993, the trailblazing scientist advised that, “The earliest possible development of a suitable technology for replacing… fossil fuels by inexhaustible, clean solar energy is of the greatest importance for the whole world.”