“Your rabbi was taken as a hostage”: Accounts of Russian Tactics in WWI

Home > World War I > “Your rabbi was taken as a hostage”: Accounts of Russian Tactics in WWI
Diaspora 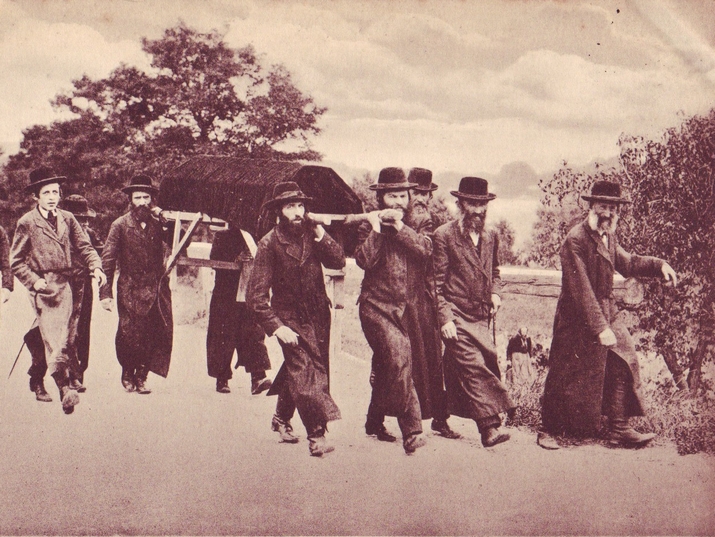 Jewish burial near the Galician theater of war, 1915 (Public domain)

Following Russian advances into portions of Ukraine and Poland in 1914, stories of atrocities quickly spread throughout Europe and beyond. At first, the accounts from Jewish communities were almost too horrific to believe: Packs of Russian Cossack and Chechen soldiers stealing whatever they liked, raping women and girls in the streets in front of their families, cutting off limbs for sport, even crucifying men who dared to speak out against their beastly acts. Others were hung by their tefillin.

The veracity of the stories was sometimes questioned, especially, for example, when promulgated by Ukrainian nationalist elements, though the sheer number of reports and diversity of sources soon dispelled any doubt that war crimes were being committed.

In many cases, Russian authorities opted for hostage-taking instead of murder or forced expulsion. They would identify and detain prominent Jews from each community – rabbis, businessmen, civic leaders – and then warn the local community that the hostages would be killed should any acts deemed disloyal be committed.

“Your rabbi was taken as a hostage. If we hear again that Jews have talked to Germans the rabbi will be hanged,” a resident of the Polish town of Myszyniec (“Mishenitz” in Yiddish) recalled being told. Just two days later, the orders changed and all of the Jewish residents of the town were forcibly expelled, with only about half a dozen Jews, including a few over the age of 90, staying behind. In many cases such decisions were made at the field commander level, yet patterns and similar methods were certainly seen throughout the conflict zone.

When the Russians conquered Czernowitz (“Chernivtsi” in Ukrainian), the capital of Bukovina, they demanded that the Jewish mayor, Dr. Salo Weisselberger, hand over prominent citizens to be held hostage. Weisselberger reportedly refused, saying that he had no control over anyone but himself. He was subsequently sent to Siberia where he remained even after Austro-Hungarian forces recaptured the city, though he ultimately returned home following a prisoner exchange and was knighted by Austrian Emperor Franz Joseph.

Bukovina and neighboring Galicia – multi-ethnic regions that straddle today’s Ukrainian, Polish and Romanian borderlands – saw especially fierce fighting during the war. Hotbeds of Ukrainian culture and education, Ukrainians in these areas were accused by the Austro-Hungarians of being pro-Russian, while the Russians cracked down on local Ukrainian nationalists by mean of imprisonment, expulsion and murder.

Meanwhile, deep-seeded antisemitism, mistrust and geopolitical interests, ensured that accusations of treason and disloyalty against Jews persisted across Europe. The realities of Jewish life and loyalties at the time, though, were far from clear or predictable. Jews, in fact, served and sacrificed on all sides, despite such allegations. The Russian, Austrian and American armies each had hundreds of thousands of Jews among their ranks, not to mention the numerous other nations engaged in the conflict.

Nevertheless, the Jewish civilian population suffered greatly, especially at the hands of Russian commanders who often expelled Jews from the towns and cities they called home simply because of their communal affiliation. They were generally forbidden from bringing their possessions with them into forced exile. With no truly comprehensive statistics available, scholars estimate that during the course of the war, between half a million and one million Jews in the Russian Empire were forcibly expelled from their homes. Scholar Jonathan Frankel has even estimated that some 1,000,000 Jews were already expelled by the end of 1915.

In an excerpted letter published early that year, one exile from the town of Skierniewice recalled his personal experience:

“We were not even permitted to leave behind us the sick and the women in childbirth. Only the Jewish bakers, blacksmiths and a few contractors were allowed to remain. But they did not care to stay and prepared to leave with the rest of us…

The Poles did not even wait for the Jews to leave town before they started plundering our homes and shops. They met with no resistance. The Jews, of course, were powerless…

It was the Sabbath, but the rabbis declared it lawful to set the children, the feeble old men and the women in childbirth on wagons, which we hired at unheard of prices. We took the scrolls of the law in our hands and, amid savage cries of the Poles and the soldiers, we left the town in silence and despair… Even the children cried with us…

The worst part of our experience was, however, that all along the way we were continually joined by ever new hosts of Jews who were even more destitute than we. The livelong day we dragged ourselves along the hard, rutty roads. Besides us moved long lines of Russian soldiers. They were coming to ‘redeem’ the land from the hands of the enemy and it was these redeemers who inflicted upon us the most excruciating woes. Wherever the Russian troops went they were accompanied by a crowd of Poles, men and women and children, who would point at us and shout: ‘There go the traitors!’… ‘Go to Palestine, you accursed Jews!’ the Poles and the soldiers would taunt us…”

A report published later in 1915 described forced expulsions deep into Russian territory as far as the Ural Mountains and Siberia as “an awful picture of the most abject misery”. Train cars packed mostly with Ukrainian Jews, Lithuanians and “other inhabitants of the war zone,” were “filled beyond their capacity… the people are heaped indiscriminately in piles, old men and women, children, sick people, all of them worn out and exhausted by a long journey lacking all human comfort… all of these people are in rags…”

The reporter further described the prisoners as “hav[ing] been shipped like merchandise or worse, like cattle. They are numbered and each one carries his bill of lading. They are not human beings they are treated like a shipment of freight.”

This heap of humanity had been traveling for weeks, having no idea where to go. “It matters little where we are sent to, as long as it only brings us nearer to death,” one of the prisoners bemoaned.

While many of their brethren were sent eastward, thousands of Jewish refugees descended upon major cities across Europe. Just a few months into the war, the Vienna Jewish community, for example, was already feeding kosher meals to some 8,000 refugees each day. In Warsaw, thousands arrived daily, packing communal institutions. Hundreds of people, mostly women and children, even slept in the Zamir literary club, founded and headed by legendary Yiddish author Y.L. Peretz, who cared for them personally. Wall-to-wall beds stuffed the club’s main hall, which looked like an “ant colony that had been destroyed,” according to S. Ansky, the famous scholar and author of The Dybbuk, in his book The Destruction of the Jews of Poland, Galicia and Bukovina. The refugees had come “mostly by foot, robbed, naked, starving, faded by fear and helplessness,” Ansky recalled.

According to historian Peter Gatrell, “for decades the only publication of note in Russian relating to population displacement in the era of the First World War was a brief and tantalising encyclopedia entry on ‘refugeedom’ by Abram Kirzhnits in the first edition of the Soviet historical encyclopedia.”

Kirzhnits termed concerted Russian efforts to massively displace diverse civilian populations a ‘bacchanalia of forced migration’. While “Jews in particular suffered from widespread antisemitism,” according to Gatrell, the forced migrations “ensnared Poles, Jews, Latvians, Lithuanians, Belarusians and Ukrainians… targeted on account of their presumed disloyalty to the empire.”

This “bacchanalia of forced migration” deeply impacted 20th century history, while its effects – and causes – continue to echo in Ukraine and well beyond its borders.