Poems and Stories by the Jewish Children of Kharkiv, Ukraine

A booklet labeled “The Lives of Children”, preserved at the National Library of Israel, contains Hebrew stories and poems written a century ago by Jewish high school students in Ukraine 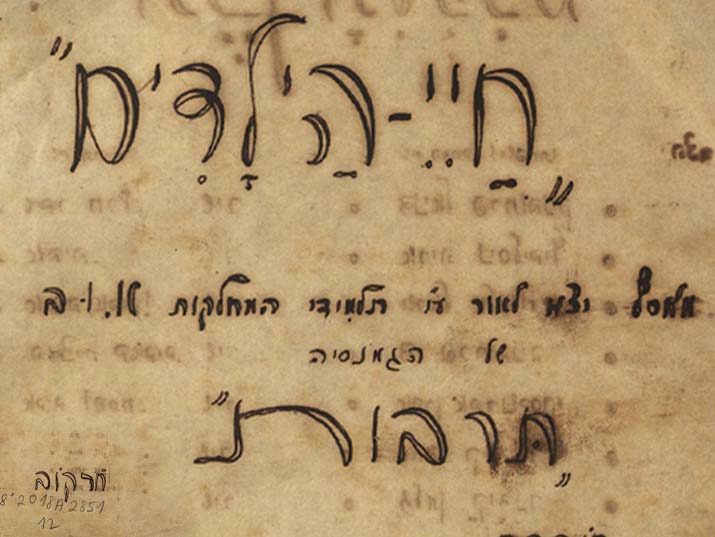 The National Library of Israel’s Rare Items Collection contains a special booklet of poems and stories written by boys and girls in the city of Kharkiv, Ukraine, ahead of the Passover holiday in the year 1920.

A language in the process of revival needs speakers, young speakers most of all: nursery, kindergarten and school age children, who will grow up speaking the language fluently and freely. Apart from speakers, such a language also needs tools for teaching it, and the main early tool developed by the Zionist movement to teach its young followers Hebrew was a compilation of stories, songs, poems, and rhymes. In 1887, Eliezer Ben-Yehuda and David Yellin published the first Hebrew “Reader for Jewish Children” (המקראה לילדי ישראל).

In the last few decades of the nineteenth century and until after World War II, teachers, students, and writers contributed hundreds of original Hebrew texts for the benefit of the young learners in the many Hebrew schools established in Europe. It was a huge project in both its scope and importance, and yet, anyone who has ever studied a foreign language knows that even that it is not enough.

The first stage in language learning is passive absorption; the second stage is practice. The booklet “The Lives of Children” is a vivid example of this second stage: the transition from reading to writing, from passive absorption to spontaneous creation. The truth is that students of the “Tarbut” school (tarbut is Hebrew for “Culture”) in the city of Kharkiv in Ukraine could not have chosen a more appropriate theme for their reader: the renewal of spring and the commemoration of the liberation of the Israelites from slavery to freedom on Passover.

The Tarbut organization, which aimed to establish a network of Hebrew schools across Eastern Europe, was founded only three years before the publication of the booklet, in April 1917, in Moscow. It was a fateful year that saw the fall of the tsar and which ended with the establishment of the Bolshevik government, hostile to both Zionism and the Hebrew language. Following the Russian Civil War and especially due to the Bolsheviks’ anti-Zionist policy, the Tarbut organization was forced to close its Moscow headquarters and start again from scratch in Kiev, Odessa, and Krakow in mid-1918. At first, Tarbut’s Ukrainian branch received short-term funding from the independent Ukrainian government, but this ended when the communists took over that country as well. It also spelled the end for the short-lived flourishing of Hebrew in Ukraine. The booklet from the Tarbut school in Kharkiv was published during that small window.

The booklet “The Lives of Children” offers us a glimpse into the world of Kharkiv’s Jewish children in their own words, in clear and elegant Hebrew. Each piece of prose or poetry is accompanied by the writer’s name, and all the writings, as mentioned, deal with the coming of spring and the festival of Passover. It is in fact a collection of “songs, stories, memories, impressions, and imaginings,” by first and second division Tarbut students. From the texts, it is clear that these are not first or second graders, but most likely boys and girls around the age of 14 or 15.

Following the table of contents is an illustration of a peaceful landscape with the caption, “On the shores of the Dnieper”— that is the Dnieper River, which flows from Russia through Belarus and Ukraine to the Black Sea. 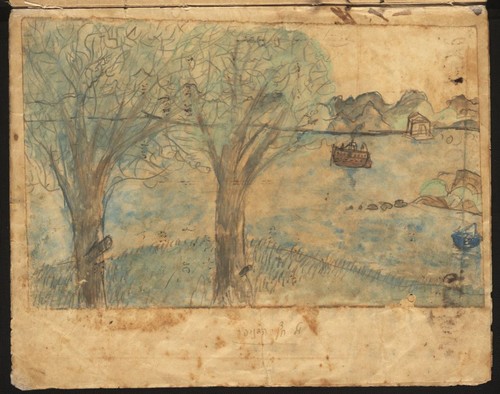 The first work is a poem by Daniel Prakhabmek called Winter is Over. The poem is even dated – 5th of Nisan, 1920:

Winter is over, the cold is gone,

The universe is filled with joy.

Shining in the sky,

Casting a wealth of light on the Earth,

Everything is joyful, alive, and glowing,

The spirit of spring washes over all

Happy are the tall buildings,

Still, there remains a glassy film of ice,

Over the swamps, over the streams,

Still, the trees are bare,

The leaves not yet budded.

The birds not yet returned,

But spring is already felt,

In every corner and square.

The sky has changed

The sea foam is different,

And spring is already seeping,

Into the depths of the soul.

This is not the world,

This is not as the heights of Creation,

Everything is alive, fresh, happy

Everything returns to life! 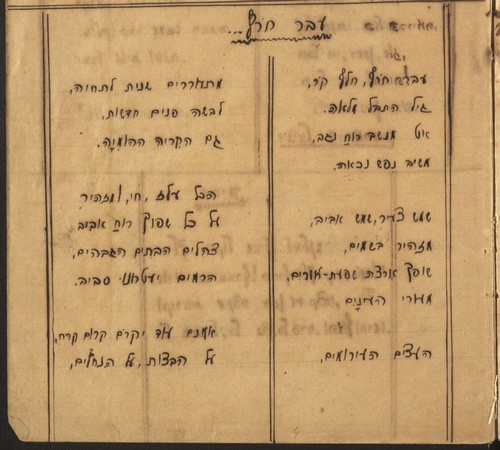 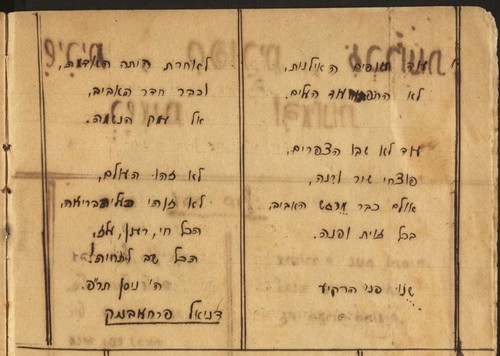 How awful is winter’s great cold

The trees, have you seen, how beautiful they are in the spring,

In winter, they stood, mourning and asleep,

And here, spring is come, they have woken, risen,

They begin to look around, around,

The trees begin to whisper among themselves

-“Now we will grow with the coming of spring!” 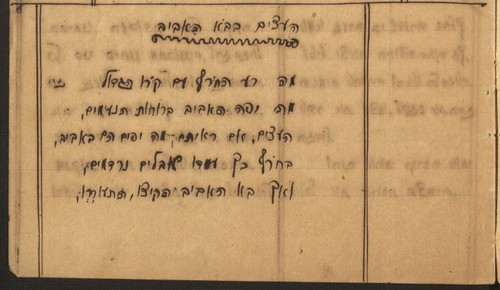 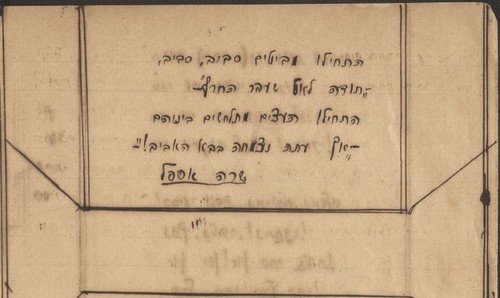 After nine poems devoted to the end of winter, the coming of spring and the Passover celebrations, comes the first in a series of stories. Eliezer Aharonov writes about preparations for Passover:

In our house, work is at full speed. All the members of our household are preparing for the great holiday, the Feast of the Redemption of Israel, which is Passover. My father takes the Haggadot from the closet, my mother and aunt turn over the rooms, clean the tables, chairs, and beds: I wanted to help them but mother shoos me out for a walk. I went outside, the air was clear, the sky was pure and as if the whole world had cleansed itself, to meet the great feast. And here is my sister calling me in for lunch. How hard it was for me to leave the shore and go home, but I comforted myself with this thought: maybe my mother would let me go out after lunch. I went home, ate, and went out again. It’s hard to describe what pleasure I felt in that moment!!! 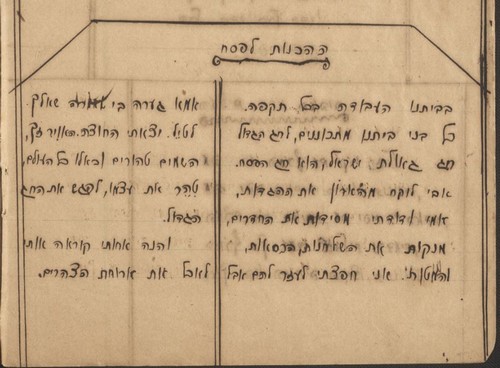 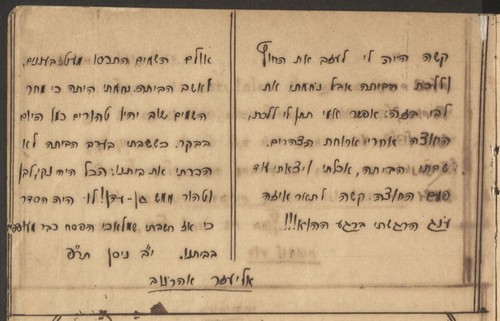 In all the stories (with one exception), the writer is also the main character, and many make mention of the authors’ parents, especially the mothers. Eliezer’s mother sent him for a walk outside so he wouldn’t interfere with the cleaning, while Chaim Sheingald’s story begins with a question he asks his mother: “Why is it bright today? Why are there no clouds like yesterday?”

Contrary to the Zionist myth that the Diaspora Jew was disengaged from his or her surroundings, it is clear that the students in Kharkiv feel an affinity for the nature around them. They experience spring as a vivid and glorious time of the year, a time of incredible changes and beautiful transformations. The cold departs and the rain clouds give way to the warming sun. To these young poets and writers, the association of burgeoning nature with the approaching Passover holiday is clear. 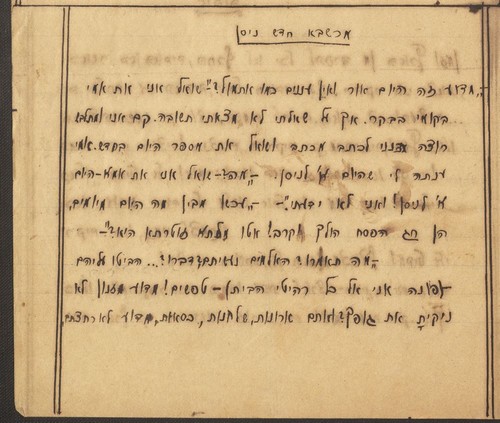 How wonderful to read and reflect on these scenes from the lives of Jewish children in Ukraine—not for the distance in time (more than a century has passed), but rather for the similarity between the students who lived and wrote Hebrew a hundred years ago and the children we were once ourselves. Who cannot relate to the scene of sitting in the classroom and feeling that itch for the school day to end? To finally be released into the great outdoors to roam about in freedom…As David Lomzov writes in his story, “Spring is Come”:

I’m lying in my bed. I’m already awake, but I don’t understand why the light has such a reddish hue? I opened my eyes and here was the sun warming me while I lay on my bed! Happily, I jumped across the bed and saw: the little snow that remained had melted. Spring is come! A thought crossed my mind what a wonderful word is spring! How many thoughts it conjures in my heart! I’ll go to the parks, maybe we’ll go to summer camp, I’ll pick mushrooms, and walnuts and more and more…

I took my book and went to school with a happy face, where I met the cheerful faces of my friends. “Maybe we should go on an excursion today?” one child said to me. Suddenly the bell sounds and I run to our classroom. There they explain all sorts of lovely things and we are not at all interested in the things they are explaining to us, and we pretend to listen, but our hearts are outside. 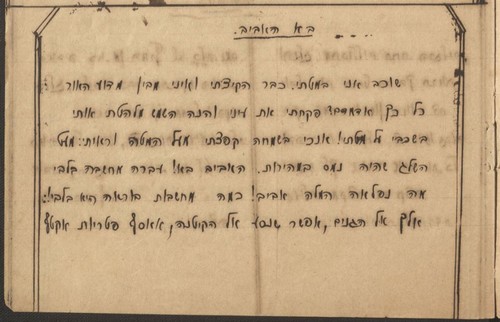 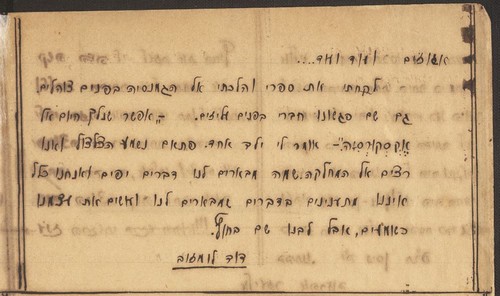 Most of the texts share three main locations: The home – where preparations for Passover are taking place and the Seder night is celebrated; The outdoors – where nature is awakening from its winter hibernation; the synagogue – where the community meets together with the rabbi. Some of the stories, such as the one above, mention a fourth location as well – the classroom.

So, how did Kharkiv’s children spend their Passover? The evidence certainly shows that not much has changed, which is what is so beautiful and moving. Mordechai Halevi Izgur writes:

A few days before Passover, my mother and I carried our Passover utensils to our cousin, because we celebrated the holiday with him in his house. There they began to prepare the utensils and clean the rooms. At nine o’clock in the morning on the eve of Passover, we hurried to eat the chametz [leavened bread] and remove what remained from the house. In a word: we tried to make “Passover” in all the rooms. 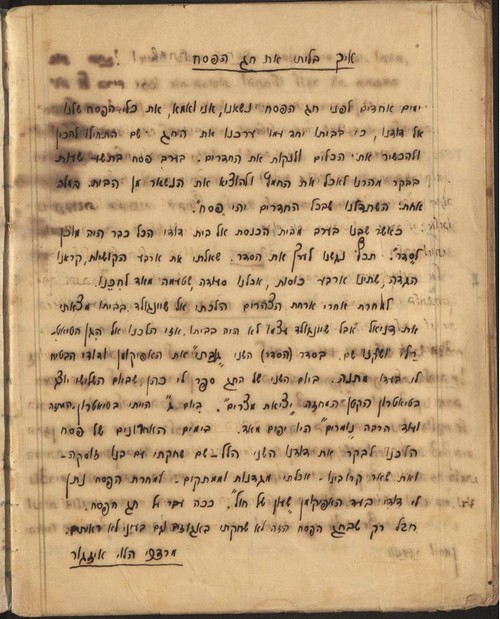 Most of the passages in the booklet were written by boys, but Hannah Brik’s story is unique in that it is included in the section called “Imaginings.” This is the only text not written in the first person. The protagonist is little Sarah, who, feeling tired on the eve of Passover, falls asleep just before her father returns from synagogue. 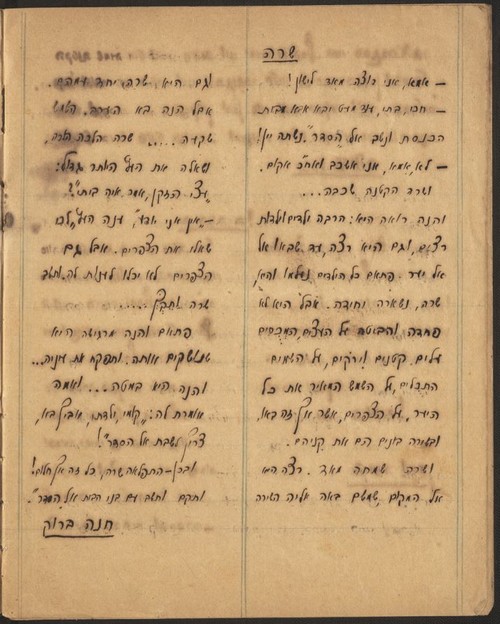 Sarah proceeds to dream of a joyful venture into the forest – she joins the birds in song as time passes among the trees. Later, as evening falls in the dream, Sarah’s mood shifts – “My old tree,” she sadly asks one of her woodland companions, “where is my home?” – “I know not,” the tree replies, “go and ask the birds”. Yet the birds are unable to help as well. Just as Sarah breaks down in anguish, she is awoken by her mother’s kisses, urging her to rise from her bed and come to the Passover table. Father has returned…

We cannot do justice in such a short space to the writings of all the students at the Tarbut school in Kharkiv. But we are happy to tell that the entire booklet has been scanned and uploaded to the National Library of Israel website as part of the “450 Years of the Hebrew Book” project. You can read the booklet here. Incidentally, this booklet is numbered 12, which means that there were at least 11 previous booklets, and presumably more.

We conclude with a prayer for the end of the current war in Ukraine and for the quick return of peace and quiet to the region.