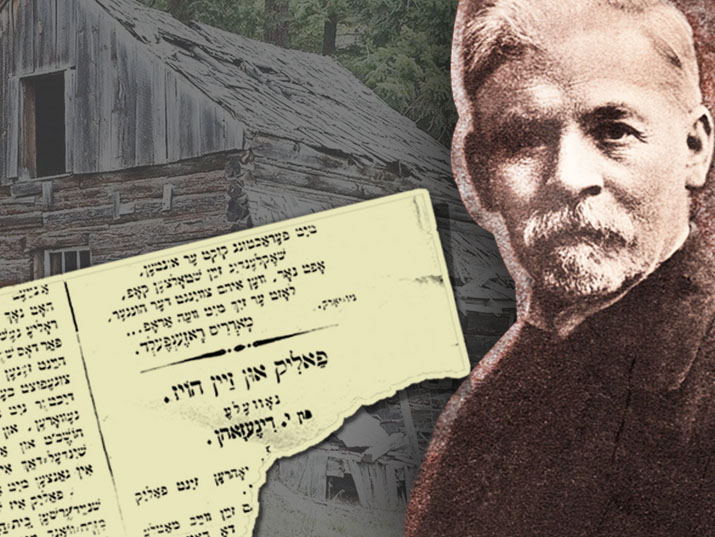 Old Yiddish newspapers now online brought to light the end of the tale of Falik, who refuses to leave the Old Country even as his house literally falls down around him (Image: Dinezon, his story and a shack like Falik's)

There is something exhilarating about making a research find—especially when the discovery adds real historical or literary value. That’s what happened recently when a lost piece of Jacob Dinezon’s writing was located in an old Yiddish newspaper available via the Historical Jewish Press project, an initiative of the National Library of Israel in partnership with Tel Aviv University.

My first encounter with this extraordinary resource was in obtaining information about Dinezon’s death and funeral in the Warsaw Yiddish newspaper, Haynt (Today). Most of these reports, which were translated into English by Tina Lunson and are now online, were published in late August and early September of 1919.

This latest discovery was motivated by the Yiddish translator Mindy Liberman who recently completed the first English translation of Jacob Dinezon’s novella, Falik un zayn hoyz (Falik and His House), which was initially published in fifteen installments in the Yiddish newspaper, Der fraynd (The Friend), in 1904. These installments were subsequently republished by Akhisefer in Warsaw, Poland, as part of a collection of volumes celebrating Dinezon’s 10th yortsayt (the 10th anniversary of his death) in 1929. Interestingly, the book was titled, Falik in zayn hoyz (Falk in His House).

I first met Mindy at a meeting of the California Institute for Yiddish Culture and Language in December 2019, during a commemoration of Dinezon’s 100th yortsayt. After my talk, Mindy approached me and mentioned that she had been translating poems by the Yiddish poet Miriam Ulinover, was enjoying the process, and was interested in continuing her translation efforts with a work of fiction.

At that time, I told her that I was about to take a break from the Dinezon work but that there was one short Dinezon novel, Falik un zayn hoyz (Falik and His House), which had always intrigued me. From what I had read, the plot was most unusual. The story focuses on an old tailor, Falik, whose sons have moved from Eastern Europe to America. The sons want their parents to join them, but Falik, even though his house is falling down around him, doesn’t want to leave the Old Country. According to the Yiddish literary historian Shmuel Rozshanski, “Dinezon was possibly the first of the Yiddish writers in Russia to describe this type of Jew who doesn’t want to leave his old home even though he endlessly suffers in it.” (Translation by Miri Koral)

Mindy and I exchanged email addresses, and a short time later, I sent her a link to an online version of Falik un zayn hoyz made available by the Yiddish Book Center’s Steven Spielberg Digital Yiddish Library.

When Mindy read the Yiddish book, she discovered something startling: the final few pages of the story were missing!

Instead of the end of the story, this notice from the publisher appeared:

Mindy’s translation of the notice:

This story “Falik and his House” was once published in “Fraynd.” Before his death, Jacob Dinezon heavily revised (literal: improved) it, threw out and added whole pages, and had it typeset in book form. He prepared the proofs himself.

The story was typeset until the last page, but he did not manage to set the type for the last few lines of the proof sheet.

We present it as it was left at the hand of the deceased author.

The novella was published without the ending!

I couldn’t believe that Dinezon hadn’t written an ending to his story. Certainly, Der fraynd wouldn’t have published fifteen installments without the final words. Why didn’t they just go back to the original newspaper to find the ending?

Then it occurred to me, the original newspapers were published twenty-five years earlier. At that time, finding an archive of Der fraynd, which stopped publishing in 1913, was probably impossible. So Falik’s publishers did the best they could and printed what they had.

Today we have resources they couldn’t have even imagined back then, including the aforementioned Historical Jewish Press! So I headed online to see if they had issues of Der fraynd and was delighted to find that they had digital images of the entire run of the newspaper!

Now, at this point, I have to admit, there was still a problem: I don’t read Yiddish. I’ve always had to hire Yiddish translators to read any of Dinezon’s books or the research materials related to his life and times. So I knew there was no way I could read the bold Yiddish headlines on my own. But I did have an image of the title from the book, so in effect, like a computer, I basically relied on image recognition.

Starting with Friday, January 1st, 1904, I began scanning through the newspaper, day-by-day and page-by-page.

The first appearance of Falik un zayn hoyz showed up on January 17th. The page was damaged, and the installment number was missing. There was also a surprise: the title was not Falik IN His House but Falik AND His House — which makes sense when you read the story and realize the house is presented as a character who Falik often calls “Brother.”

Jumping forward a few months from January, I found the installment for Part 13 on May 8th and Part 14 on May 22nd. At the bottom of that installment were the words, “ende kumt” (“end coming”).

Needless to say, my excitement soared as I thought, “At last, I’m going to find the final chapter of this story!”

With renewed energy, I slowly started going through each issue of the newspaper from May 23rd through the end of June, page-by-page, column-by-column. But as hard as I tried, I couldn’t find the missing part. I went back again through the whole lot without success.

Was it possible that Dinezon had never finished the story or that for some reason, the newspaper had never published the final installment? Frustrated and exhausted, I said, “To hell with it!” and went to bed.

Getting up the next morning, I just couldn’t let it rest. It just didn’t make sense. How could Dinezon not finish his story, and how could Der fraynd not publish it after promising the installment was forthcoming? It had to be there somewhere!

So I went back and downloaded twenty-five full-page PDF copies of the newspaper starting from the day after the appearance of Part 14. This way, I could scan through each day in a much more precise manner on my large computer screen.

And that’s how I found it! At the very bottom of page two on June 1st: Part 15 of Falik and His House! An early 20th-century historical literary discovery made possible by our 21st-century technology.

There’s one more thing that was confirmed by scanning through all those online newspapers. It has always been my contention that Jacob Dinezon deserves equal recognition alongside the other prominent Yiddish writers of his day. For Dinezon, 1904 was a banner year. Der fraynd published two of his novellas and several of his short stories. Dinezon’s works appeared side-by-side with the works of Sholem Aleichem, I. L. Peretz, Mendele Mocher Sforim, and S. Ansky.

At that moment in time, Dinezon was easily as well-known and popular as his now more famous colleagues and friends.

A version of this article originally appeared in Jacob Dinezon: Beloved Uncle of Modern Yiddish Literature under the headline “A Research Discovery”. It has been published here as part of Gesher L’Europa, the National Library of Israel’s initiative to connect with people, institutions and communities across Europe and beyond, through storytelling, knowledge sharing and community engagement.

Dozens of letters written to Dinezon (sometimes spelled Dineson), as well as a number of manuscripts he wrote, may be found in the National Library of Israel’s Jacob Dineson Collection.