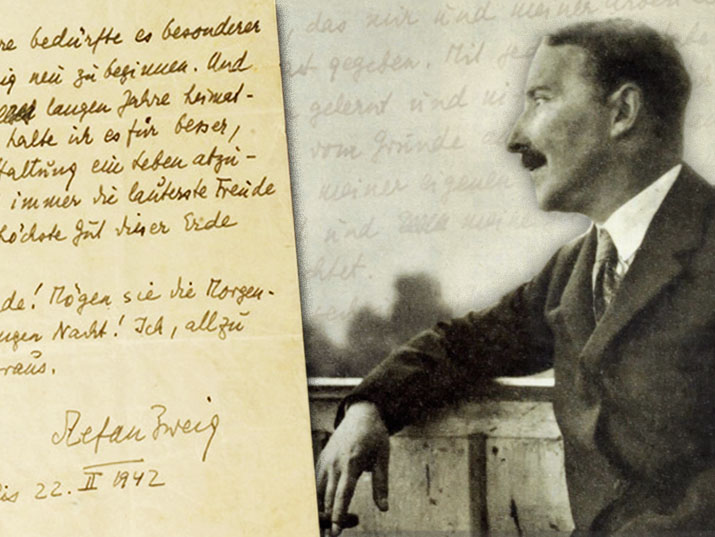 Stefan Zweig was born in Vienna in 1881 to a well-to-do Jewish family. As the younger son, Zweig was exempt from the obligation to pursue a traditional, breadwinning profession and, instead, dedicated himself to the art of writing. He wrote poems, novellas, historical biographies, novels, and essays. Zweig traveled extensively throughout Europe and his books were sold in many languages with great success.

His most well-known work, The World of Yesterday, discusses the rise of German populism and the long-term tenure of Vienna’s anti-Semitic mayor, Karl Lueger. As someone who had experienced these developments first-hand, Zweig understood that this “new,” venomous iteration of politics had paved the way for the rise of the Nazis. He realized that the xenophobia and anti-Semitic rage that characterized this particular political movement would be exploited and perfected later by the head of the party, Adolf Hitler.

With the ascension of the Nazis to power in Germany in 1933, Zweig found himself gradually pushed of the German-speaking world. In 1938, with the annexation of Austria by Nazi Germany, Zweig moved to England. Upon the outbreak of World War II, he traveled to the United States and visited South America. In 1941 Zweig immigrated to Brazil with his second wife, Charlotte Elizabeth (‘Lotte’).

Zweig viewed Brazil as a land of hope with a bright future. He believed that there was a chance that the values he cherished could flourish there: the unity of the human race, peace, brotherhood among men, and equality among different races. However, as the Nazis advanced their conquest and the war spread to the Atlantic, the ramifications were felt even in South America. Zweig himself felt ever more isolated and grew aware that the European world he knew and loved was lost forever.

On February 22nd 1942, Zweig and his wife, Lotte, were found dead in each other’s arms. The couple committed suicide by taking a lethal dose of pills. Zweig passed first, with Lotte following.

This is the suicide letter Zweig left behind:

Before parting from life of my own free will and in my right mind I am impelled to fulfill a last obligation: to give heartfelt thanks to this wonderful land of Brazil which afforded me and my work such kind and hospitable repose. My love for the country increased from day to day, and nowhere else would I have preferred to build up a new existence, the world of my own language having disappeared for me and my spiritual home, Europe, having destroyed itself.

But after one’s sixtieth year unusual powers are needed in order to make another wholly new beginning. Those that I possess have been exhausted by long years of homeless wandering. So I think it better to conclude in good time and in erect bearing a life in which intellectual labour meant the purest joy and personal freedom the highest good on earth.

I salute all my friends! May it be granted them to see the dawn after the long night! I, all too impatient, go on before.

“If Judaism is a tragedy, let us live it” – Stefan Zweig’s Letters Revealed